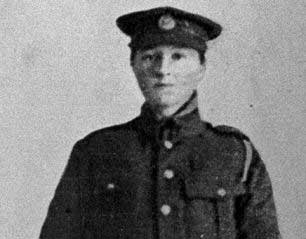 Dorothy Lawrence was 18 when she made her way by bicycle to the front lines on the Western Front in the hope of becoming a war reporter. Disguised as a British private, she worked for ten days as a sapper before surrendering herself, aware of the risk she posed both to herself and her confidantes.

High Command was acutely embarrassed that a teenage woman had simply cycled to the front. At Calais, six generals and 20 other officers took turns interrogating her. Following an attempted escape, some assumed she was a spy. Others were sure that only a prostitute, or, as they euphemistically put it, a ‘camp follower’ would go to the Front. In her naïveté, Dorothy did not know what the term meant and they talked for hours at cross-purposes.

She was placed in a French convent and forced to sign an affidavit, promising not to write of her experiences in the newspapers. Finally shipped back to Britain, she was further made to agree to reveal nothing until given permission.

In 1919 she did finally publish her autobiography, although it was heavily censored and was not a success. Having moved to Canonbury in north London, she made a claim to the police that she had been raped by her church guardian. Declared insane, she was sent to Colney Hatch Lunatic Asylum, where she died in 1964.