The Author as a Historian

The ideas of a French philosopher provided the great Egyptian novelist with a way of assessing the good and the bad in his nation’s past. 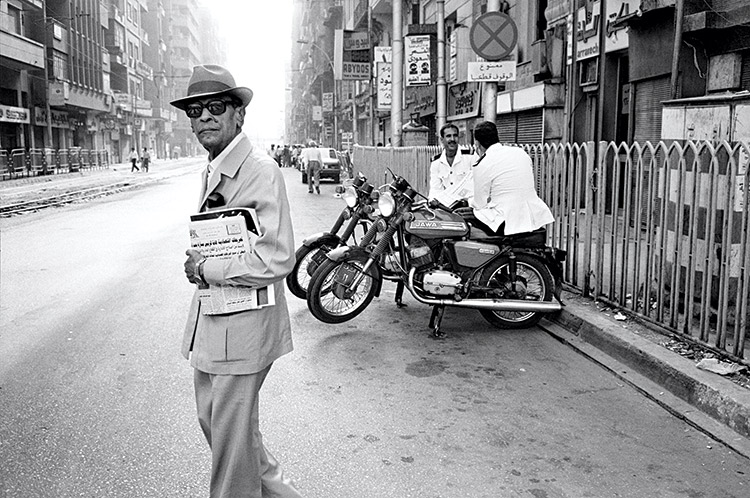 Throughout his life, Naguib Mahfouz felt caught between the timelessness of Egypt’s ancient past and the turbulence of its recent history. Even as a boy, he had felt it. Growing up in a devout Muslim household in one of Cairo’s oldest quarters, his childhood had been shaped by the unchanging obligations of faith and overshadowed by the legacy of the past. When he was not studying the Koran, he was playing in the streets of al-Gamaliya, not far from Saladin’s Citadel, or visiting the pyramids with his mother. But, though it was easy to believe that he was insulated from time’s flux, he could see that Egypt was changing around him. Over the preceding 40 years it had embarked on a process of rapid social and economic modernisation. Industrial development was spurred on by foreign investment, new roads and railways were constructed, educational reforms were implemented and scientific rationalism was exalted. Political changes were in the air, too. Though Egypt was notionally a British protectorate, liberal nationalism was on the rise and, before Mahfouz had turned eight, calls for independence had spilled over into violent revolution.

As a young man, Mahfouz was tormented by the tensions between eternity and change, openness and nationalism, religion and modernity. But, while he was studying at the University of Cairo, he chanced upon a solution in the philosophy of Henri Bergson (1859-1941).

Two things caught his attention. One was Bergson’s understanding of time. According to mathematicians, time consisted of infinite homogenous units. Though wholly independent, each moment was just like any other. But Bergson believed this was wrong. It was not how human beings experienced time. He pointed out that we are only conscious of our existence because we perceive change. And we are only able to do so because each moment is connected to, but different from, the next. Thus, the time that each individual experiences (what Bergson called ‘duration’) was not only heterogeneous, but also continually in flux, dependent on memory and utterly unforeseeable. In turn, each person’s ‘duration’ formed a small but unique part of the wider continuum of human ‘duration’.

The other was Bergson’s understanding of perception and morality. There were two kinds of each. There was the intellect, with which ‘mathematical time’ was understood. It could only perceive the unchanging and the discontinuous. It conceived of a process as a sequence of unrelated moments. From it sprang a ‘closed morality’. This was static and rule-bound; it prioritised social cohesion; it excluded others and sought war; and it invented gods to ensure obedience to its dogmas. On the other hand, there was intuition, necessary for understanding ‘duration’. This did not draw distinctions, but comprehended the totality of whatever it perceived. From it arose an ‘open morality’. This was creative and expansive; it insisted on no fixed doctrines; it was universal and pacific; and it was mystical, rather than dogmatic.

In his first novel, The Game of Fates (1939), Mahfouz combined Bergson’s idea of duration with Egyptian history to reconcile the timelessness of ancient monuments with the flux of experienced time. The story takes place during the reign of the Pharaoh Khufu (d.2566 BC). At its heart is Khufu’s determination to impress his will on eternity. He has already begun building the Great Pyramid, both as his resting place and as a monument for all time. Having fathered many sons, he reasons that the succession is secure. But one day, a soothsayer foretells that none of Khufu’s children will rule after him. Instead, the son of a priest of Ra – born that day – will assume the throne. Khufu immediately sets out to thwart the prophecy by killing the newborn boy, Djedef. But the priest is forewarned and sends his son to safety before the pharaoh arrives. Unaware of what has happened, Khufu kills a maid’s baby in the belief that he is the priest’s child. Shielded from his true identity, Djedef is raised by the inspector of the pyramid. He grows to become a superb soldier and, after saving the crown prince’s life, is made commander of the royal guard. Later, he saves the pharaoh from an attempted coup, killing the deceitful crown prince in the process. Out of gratitude, Khufu names Djedef his heir. On his deathbed, however, Khufu discovers the truth. He has unwittingly fulfilled the prophecy. While the physical remains of his reign will endure forever, he sees that life is constantly in flux.

Between past and present

If change was an inevitable part of human life, this was not to say that modernity should be welcomed with open arms. Though initially sympathetic to the Wafd party, Mahfouz was critical of liberal nationalism. In Thebes at War (1943), he used Bergson’s idea of morality and the example of ancient history to expose its dangers. Set in the 16th century BC, it tells of the Egyptians’ struggle against the ‘white skinned’ Hyksos, who had ruled the north for over a century. After many years of bitter conflict, the Pharaoh Ahmose at last liberates the country from the foreign ‘tyrants’. But his victory is unedifying. Although he has fallen in love with Amenridis, a Hyksos princess, during the campaign, they cannot be together. Committed to narrow Egyptian nationalism, he must forsake her. Though they continue to write to one another, he discovers that Amenridis views him as a little more than a ‘pygmy’. The implication was clear. Even if Egypt succeeded in ejecting the British, the ‘closed morality’ on which nationalism was based meant that it would not be any more fulfilled.

But nor did Mahfouz advocate taking refuge in an unchanging past. Egypt’s history should not be a haven. To his mind, the backward-looking religious dogmatism of the Muslim Brotherhood (founded in 1928) was as much a manifestation of Bergson’s ‘closed morality’ as the liberal nationalism it opposed. This was dramatised in Khan al-Khalili (1945). Set in the middle of the Second World War, it follows the story of a Cairene family that moves from the modern quarter of al-Sakakani to the religious neighbourhood of Khan al-Khalili. But though they hope that the nearby al-Hussein mosque will protect them from German bombs, it is no safer. The youngest son dies from tuberculosis. His brother is forced to see that the inflexible religion he adores is just as vulnerable as the rational modernity he despises.

Under Bergson’s influence, Mahfouz came to believe that Egypt’s best hope was to strike a balance between past and present by embracing an ‘open morality’. As he intimated in He Who Lives in the Truth (1985) – a fictionalised historical enquiry into the reign of the reforming Pharaoh Akhenaten (d.1336 BC) – the intellect should surrender to intuition; memory of the past should inspire change for the future; dogmatic, rule-bound religion should give way to mysticism; and nationalism should yield to an outward-looking cosmopolitanism.

By the time Egypt achieved its independence, Mahfouz had realised that this could not be achieved without sacrifice and was not ignorant of the personal tragedy this could entail. In the Cairo Trilogy (1956-7) – an epic account of the life of a Cairene family between 1917 and 1944 – he told of how a mother and father are destroyed by grief when their son, Fahmi, dies while agitating for Islamic socialism during the 1919 revolution. But by exercising intuition, rather than intellect – as Bergson had urged – this could be put in its proper historical perspective. While the finality of an individual’s death might seem tragic, it could be seen that the sacrifice contributed to alleviating the broader tragedies of modern life and to advancing the development of human society.

It was against this standard that late in his life Mahfouz judged Egypt’s political history. In Before the Throne (1983), leaders from Menes to Anwar Sadat were interrogated and allocated a place in heaven, purgatory or hell. Those like Pharaoh Tuthmosis III (1481-25 BC), who embodied an ‘open morality’ and enriched the whole nation with a creative outlook, were admitted to heaven. Those like Gamal Abdel Nasser (1918-70), who embraced a ‘closed morality’ and put their own interests above the common good, leading the country to war, were sent straight to hell. Those who meant well, but were overcome by circumstances beyond their power, were consigned to purgatory.

Now that Egypt is again torn between the rigid Islamic fundamentalism of the Muslim Brotherhood and secular nationalism, it is worth asking where history will place Egypt’s current president, Abdel Fattah el-Sisi.