The man who killed Abraham Lincoln was shot dead on 26 April, 1865. 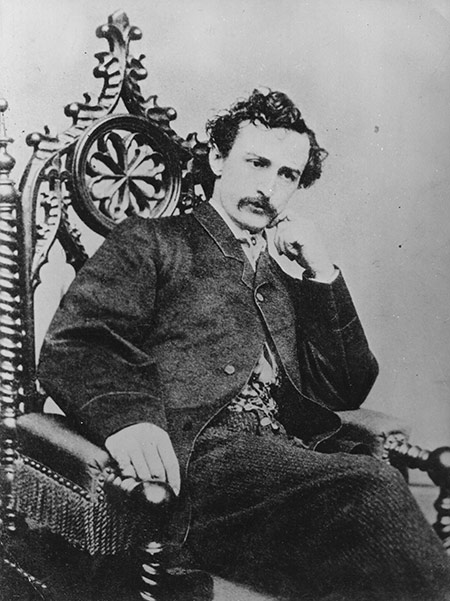 Born in 1838 in the state of Maryland, President Lincoln’s assassin was christened in honour of the English radical John Wilkes. A handsome young actor, he was a fanatical supporter of the South in the Civil War and of the institution of slavery. Booth had often performed at Ford’s Theatre in Washington DC and was well known there. On April 14th, 1865 he heard that Lincoln would attend a play there that evening. He promptly decided to murder the president, assigning a fellow-conspirator called George Azerodt to kill the vice-president, Andrew Johnson, and another, Lewis Powell, to kill William Seward, the secretary of state.

Booth rode to the theatre armed with a pistol, went into the president’s box and fired a single shot into the back of Lincoln’s head. He leapt down from the box onto the stage and escaped in the uproar to an alley outside where his horse was being held for him. Booth and a co-conspirator called David Herold rode away together and fled south into Maryland, hiding in the woods and presently crossing into Virginia. Meanwhile, George Azerodt had made no attempt to kill the vice-president, but Lewis Powell had attacked and injured William Seward.

By April 24th Booth and Herold had reached Port Royal in Virginia, almost 90 miles south of Washington. The war department had offered a reward of $100,000 (worth more than $1.5 million today) for information leading to the arrest of Booth and his accomplices and federal troops were searching for them. The fugitives took refuge at the farm of a man called Richard H. Garrett, who apparently knew nothing of what had happened and let them sleep in one of his barns.

A band of soldiers arrived at the farm in the early hours of April 26th and surrounded the barn. Herold surrendered to them, but Booth defied them and they set the barn on fire. One of them saw Booth raise his gun to shoot – or said he did – and fired at him. Mortally wounded, he was dragged to the farmhouse where he died, after saying ‘Tell Mother I died for my country’.

The body was taken to Washington and buried. Herold, Azerodt and Powell were hanged along with Mary Surratt, a boarding house owner, while others involved were sentenced to life imprisonment. Booth’s corpse was later returned to his family and buried in 1869 in an unmarked grave in a cemetery in Baltimore. For years there were those who fantasised that the whole story was a lie and that Booth had escaped and was still alive somewhere, but there seems no doubt whatever that it was Booth’s body that was buried in Baltimore. He was just 26 when he died.