The Ottomans Defeated at Belgrade 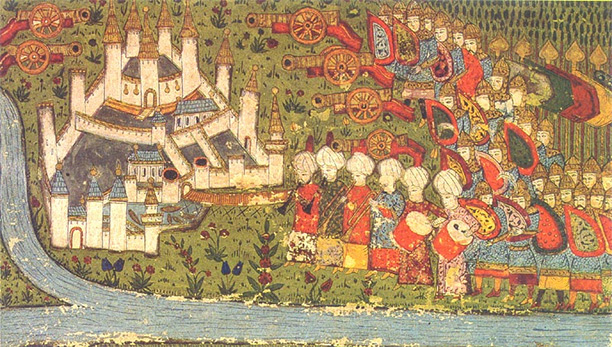 The fall of Constantinople to the Ottoman Turks in 1453 sent a shockwave through Europe, and the Pope declared a crusade. The victorious Sultan Mehmet II, who bestowed on himself the title of Kayser-I-Rum (Caesar of Rome), pressed on into the Balkans on his way to the creation of a new world empire on the Roman model. He took Serbia in 1454 and 1455, and the following year with an army of perhaps some 70,000 men, spearheaded by his crack troops, the Janissaries, he set out to take Belgrade, which blocked his way into Hungary.

A fleet sailed up the Danube carrying the Sultan’s siege artillery – many of his gunners were Christians – and convoys of camels and mules carried supplies overland. The Sultan blocked Belgrade off from the Danube with a chain of boats, moored upstream of the castle, and landed his heavy guns on the bank outside the western walls. The bombardment began in July and went on for two weeks without much effect.

At this point the Hungarian captain-general, a seasoned and redoubtable war-leader named Janos Hunyadi, appeared with reinforcements. He broke through the blocking vessels on the Danube and drove the Turkish fleet away before entering the citadel. The Sultan personally led a force of Janissaries in a night attack, which penetrated into the lower area of Belgrade and scaled the walls of the castle. Hunyadi withdrew his troops from the walls and concealed them while the Janissaries looted the empty streets. When the moment was ripe, Hunyadi’s men fell on small groups of the enemy and slaughtered them. The Turks started to retreat, but Hunyadi had prepared bundles of wooden faggots, which were set alight and thrown down on the enemy, some of whom were trapped and burned to death in the moat. The defenders took the opportunity to attack in force, driving the enemy in confusion before them. Hassan Agha, commander of the Janissaries, rushed into the action and was killed, and the Sultan ordered a general retreat. It turned into a rout and quantities of guns and supplies fell into Hungarian hands.

Hunyadi had little time left. He caught the plague and died in August. His triumph at Belgrade was hailed throughout Europe, and delayed the Ottoman conquest of Hungary for seventy years, until 1526.