Tsar Nicholas II and family visit the Isle of Wight

Tsar Nicholas II and his family arrived on the Isle of Wight on August 2nd, 1909, during the week of the Cowes Regatta. 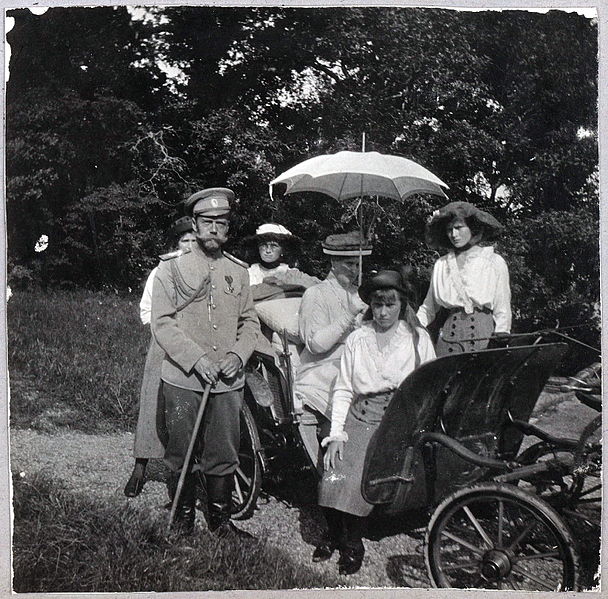 Escorted by Russian cruisers and destroyers, the imperial yacht Standart brought Tsar Nicholas, the Tsarina Alexandra and their children to the Isle of Wight and a spectacular welcome by King Edward VII with a review of the Royal Navy in its then awe-inspiring might. While cannon thundered, bands played and seamen cheered, the British royal yacht Victoria and Albert steamed slowly between the lines of warships. The two monarchs stood on the yacht’s deck saluting in response, with Nicholas in the uniform of a British admiral. It was the week of the Cowes Regatta, the climax of British smart society’s summer season, and Spithead was crowded with launches and pleasure steamers full of spectators. In the evening, King Edward entertained the Russian party to dinner on the Victoria and Albert and there was presently a dinner party on the Standart. Tsar Nicholas had meetings with Prime Minister Asquith and Foreign Secretary Sir Edward Grey.

The visit lasted only until August 6th. The two royal families were closely related and on friendly terms. Nicholas was a nephew of King Edward’s consort, Queen Alexandra, and the tsarina was a granddaughter of Queen Victoria. King Edward had been one of her godfathers and treated her very affectionately and she had fond memories of England. The king’s grandsons, David and Bertie, the future Edward VIII and George VI, were cadets at the naval college at Osborne, but Bertie developed whooping cough and was not allowed near his Russian relatives for fear of infecting the tsar’s haemophiliac son Alexei. David showed his ‘Uncle Nicky’ round the college, astonished at the elaborate police precautions that surrounded his every move.

Even so, no one could foresee the dark days ahead, when George V refused to allow Tsar Nicholas and his family to escape to England from the Bolshevik Revolution and the last Romanovs were murdered in Ekaterinburg in 1918.