When Teddy Roosevelt was re-elected, on November 8th, 1904, his words to his wife Edith were: 'My dear, I am no longer a political accident'. 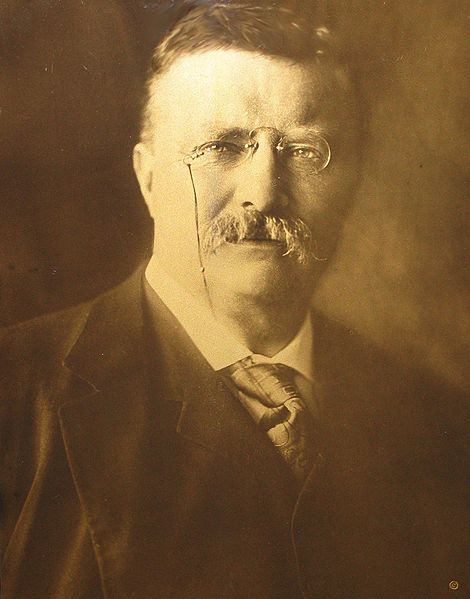 Scion of a well-to-do family of Dutch descent, highly intelligent, energetic and combative, Teddy Roosevelt had been active in Republican politics in New York since leaving Harvard. In the war with Spain he organised his own Rough Riders volunteer cavalry and led them in battle in Cuba. He returned home to be elected Governor of New York and was so effective against corrupt politicians that, to get him out of its hair, the New York Republican machine artfully contrived to get him chosen as vice-presidential candidate to President McKinley in 1900. When McKinley was assassinated in 1901, Roosevelt succeeded him in the White House, where the guest list broadened to include explorers, artists, prizefighters and cowboys. His measures to stop big business fleecing the public were popular and the election of 1904 gave him the opportunity to run for president in his own right. The forty-five-year-old Roosevelt issued a 12,000-word policy statement of admirable clarity and consistency.

Wags hoped that the Prohibition Party would put two men called Swallow and Tipple on its ticket, but it was not to be. The Democrats picked the lacklustre Chief Justice of the New York court of appeals, Alton Brooks Parker. Roosevelt, who knew and liked him, wrote warily that ‘The neutral-tinted individual is very apt to win against the man of pronounced views and active life.’ In September, however, thousands of New Yorkers turned out to cheer Roosevelt as he paraded up the East River in the presidential yacht, and as it became clear that the President was likely to win comfortably, millionaire businessmen queued up with donations.

In a letter to his son Kermit on the eve of the poll, characteristically arming himself against disappointment, Roosevelt wrote: ‘If things go wrong remember that we are very, very fortunate to have had three years in the White House, and that I have had a chance to accomplish work such as comes to very, very few men in any generation.’ He need not have worried. Carrying every state in the North, he beat Parker by 336 electoral votes to 140, with 7.6 million popular votes to 5.1 million. ‘My dear,’ he said to his wife Edith, ‘I am no longer a political accident’. Speaking to the press in the White House that evening he announced that as he had already served most of what was effectively his first term, it would be wrong for him to seek another. ‘Under no circumstances will I be a candidate for or accept another nomination.’ It was an undertaking he would come to regret.