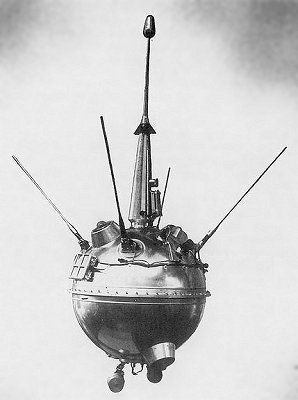 The space race between the United States and the Soviet Union brought an engaging touch of science fiction to the Cold War. To American astonishment and dismay, the Russians at first took a commanding lead. Their programme was directed by Sergei Korolev, a brilliant aeronautical engineer and expert on rockets, who had displeased Stalin and spent time in the Gulag in the 1930s. He was a commanding figure who did not suffer fools gladly and his staff treated him almost as a god. In the 1950s he developed a massive and at the time almost unthinkably powerful rocket, the R-7, which would propel Soviet spacecraft to the Moon.

Sputnik 1, the first satellite ever launched, created a sensation in 1957 when it hurtled out into space and orbited the Earth every 96 minutes before falling back into the Earth’s atmosphere. Sputnik 2 took the first living creature out into space, a sweet-tempered dog called Laika, though she did not last as long as the Russians pretended. More Sputnik missions tested life-support systems and re-entry procedures. In January 1959 the spacecraft Luna 1 (which Korolev called Mechta, ‘the Dream’) was launched at the Moon, but missed by around 3,700 miles and went into orbit between the Sun and Mars.

Then, on September 12th, 1959 Luna 2 was launched. At just past midnight Moscow time on September 14th it crashed some 240,000 miles away on the Moon not far from the Sea of Tranquillity (perhaps a not entirely appropriate location). Korolev and his people were listening as the signals coming back from the spacecraft suddenly stopped. The total silence meant that Luna had hit its target and there was great jubilation in the control room.

Luna 2 (Luna is Russian for Moon) weighed 390 kilograms. It was spherical in shape with antennae sticking out of it and carried instruments for measuring radiation, magnetic fields and meteorites. It also carried metal pendants which it scattered on the surface on impact, with the hammer and sickle of the USSR on one side and the launch date on the other. It confirmed that the moon had only a tiny radiation field and, so far as could be observed, no radiation belts. The spacecraft had no propulsion system of its own and the third and final stage of its propelling rocket crashed on the moon about half an hour after Luna 2 itself.

The scientific results of Luna 2 were similar to those of Luna 1, but the psychological impact of Luna 2 was profound. The closest any American probe had come to the Moon at that point was 37,000 miles. It seemed clear in the United States that the timing had been heavily influenced by the fact that the Soviet premier, Nikita Khruschev, was due to arrive in the US immediately afterwards, to be welcomed by President Eisenhower. Luna 2’s success enabled him to appear beaming with rumbustious pride. He lectured Americans on the virtues of communism and the immorality of scantily clothed chorus girls. The only way of annoying him seemed to be by refusing to let him into Disneyland.

Korolev had a clincher to come. Only three weeks later, Luna 3 was launched on October 4th, the second anniversary of Sputnik 1, to swing round the far side of the Moon and send back the first fuzzy pictures of its dark side, which no one had seen before. It was an astonishing feat of navigation and it was now possible to draw a tentative map of the Moon’s hidden side.

While the Americans were in disarray, with their space efforts publicly failing (Russian setbacks were kept strictly secret), Korolev went on to put the first man into space, Yuri Gagarin, in 1961. In 1963, on Khruschev’s orders, he propelled the first woman into space, Valentina Tereshkova, which enabled the Soviet Union to make propaganda mileage by claiming that under communism women were treated equally to men.

After 1961, under President Kennedy, American efforts intensified while the Soviet programme suffered from infighting after Korolev’s death at 59 in 1966, following an operation that went wrong. The Luna programme continued and in 1966, the year of Korolev’s death, Luna 9 made the first soft landing on the Moon.

In the end it was of course the Americans who won the race, in 1969, when their astronauts first walked on the Moon. For all the years of rivalry, the viewing room in Russia burst into huge applause as Neil Armstrong took the first steps. The Soviet astronaut Alexei Leonov wrote: ‘Everyone forgot that we were all citizens of different countries on Earth. That moment really united the human race.’