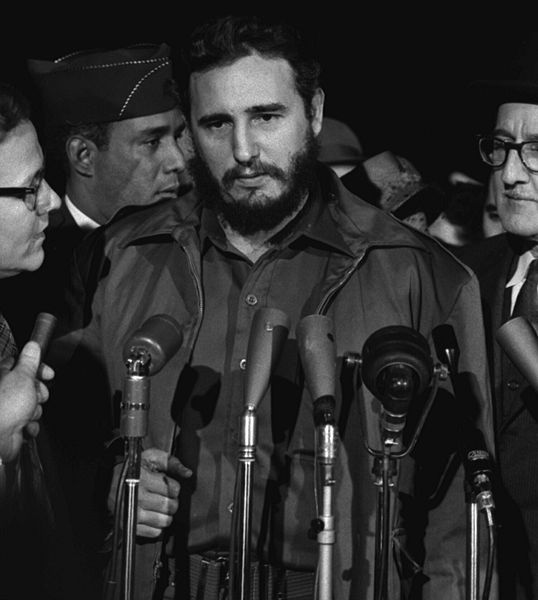 It was less an invasion than a shipwreck, as one of the participants remarked. Eighty-two men had spent a week squashed into a battered 21-metre yacht called the Granma, which Fidel Castro had bought in Tuxpan on the Mexican coast. When the moment for departure came, the weather was abominable, but Castro thought that General Batista’s regime in Cuba, to which the plan for the invasion had been betrayed, would not expect a crossing in such conditions. The revolutionaries left Tuxpan in the early hours of November 25th in pelting rain. Granma normally slept eight and the men had to take turns sitting down and standing up while the vessel laboured unsteadily through rough seas to the Cuban coast. They had to keep baling, many were seasick, they were all soaking wet and their food ran out.

They intended to arrive on the 30th, but were delayed by the weather conditions, the inadequacy of the ship’s engine and the fact that one of them managed to fall overboard one night and had to be lengthily searched for. A pre-planned rising in their support in Santiago de Cuba consequently proved premature and was easily suppressed. It was December 2nd when Granma ran aground on Cuba’s marshy south-western coast, south of Niquero. The invaders had to wade ashore, holding their rifles above their heads. A Cuban patrol boat came up and fired at the Granma and spotter planes were flying overhead. The invasion could hardly have got off to a worse start and a report from United Press International in Havana gave out that the Cuban navy and airforce had killed Fidel himself, his brother Raul and thirty-eight of their companions.

In fact all the invaders had struggled ashore, but some got lost and it took time for them to rejoin. Getting directions from local peasants, and with blistered feet from their ill-fitting boots, they moved inland to a place called Alegria de Pio where they stopped to rest in a brake of sugar cane, but failed to post sentries properly. It was now December 5th. At 4pm troops and planes, tipped off by a peasant, found the invaders and attacked. The revolutionaries scattered. Some were killed, some were captured and taken off to jail, some escaped to local towns and abandoned the enterprise altogether, and some found places to hide.

Fidel Castro and one of his companions, Universo Sanchez, found themselves alone, but were joined by a young medical student called Faustino Perez, who had been tending the wounded. Universo Sanchez afterwards recalled that Fidel wanted to look for other survivors and regroup, but Sanchez and Perez persuaded him to stay put for the moment. Goodness knew where the others were, Sanchez said, and ‘after all, if there was one person about whom to be anxious it was he, who would lead the revolution and who would overthrow Batista. He should not risk falling into the hands of the soldiers. Those were my very words.’

For days the three of them crept cautiously about, sucking on sugar cane for nourishment. They eventually found their way to a sympathetic farmer called Ramon Perez, who hid them while other survivors were found and brought in. Among them were Raul Castro and Ernesto ‘Che’ Guevara, who had a flesh wound in the neck. The survivors still had their guns, though they were very short of bullets. According to Raul, his brother whispered to him, ‘Now when we get clear and organize ourselves, we can start our campaign.’ On Christmas Day he addressed his little band of comrades in the same grand style he would have used for an audience of thousands, telling them, ‘Now we are going to win!’

Remarkably, Castro’s confidence proved justified. He led his group of between twenty and thirty men to a hideout in the mountains of the Sierra Maestra, where they made effective propaganda use of their radio transmitter. It was so difficult to shave on the way that the revolutionaries grew beards, which became part of their uniform and a badge of pride. In 1959 Batista fled and Fidel Castro and his ‘bearded ones’ entered Havana in triumph. Granma became the name of the new regime’s official newspaper.