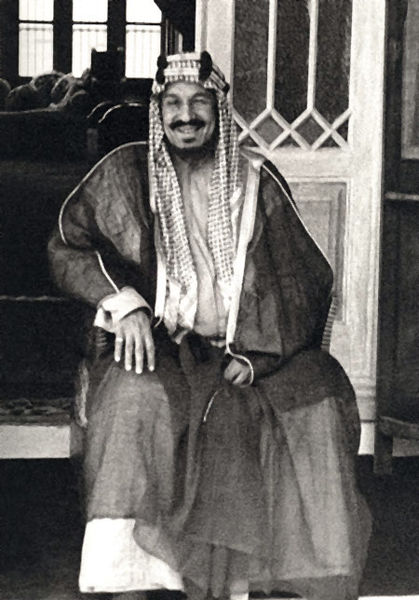 Abdul-Aziz ibn Abdul-Rahman al Faisal al Saud, founder of Saudi Arabia, was in his last years one of the richest men on earth. Born in 1880 into the ruling dynasty of Riyadh when it was still an obscure little mud-walled town in the middle of the desert, Ibn Saud grew up in an Arabia which was part of the Ottoman Empire, largely both hidden from and ignorant of the outside world and torn by tribal quarrels. He came to dominate it by shrewdness, audacity and the huge force and charm of his personality. His family were driven into exile in Kuwait when he was ten, but in 1902 he returned to storm Riyadh under his green battle-flag with a mere sixty or so desert Bedouin mounted on camels.

From there he went on to subdue the rest of Central Arabia. He stayed clear of T.E. Lawrence and the Arab Revolt in the First World War, but in the 1920s he took Mecca, Medina and Jeddah on the Red Sea coast, in 1926 proclaimed himself king and in 1932 renamed his realm Saudi Arabia. The kingdom, which covered most of the Arabian peninsula except for the Yemen and the Gulf sheikhdoms, subsisted on primitive agriculture and the profits of the pilgrim trade to Mecca and Medina. The first oil was produced in the 1930s and in the 1940s and ’50s Saudi oil exports began to bring in colossal wealth.

The king recruited an English adviser, Harry St John Philby (father of the infamous Kim), who first went to Riyadh in 1917 with a British mission, but Ibn Saud ruled his kingdom directly in the old Bedouin manner until his death. His male subjects could approach him personally for help or for justice, and they did. He made full use of the fact that he was the hereditary imam, or leader, of the Wahhabi sect of Islam. This uncompromising fundamentalist movement, founded in the eighteenth century by Muhammad ibn Abdul-Wahhab, sought to return to the original Islam of the Prophet, free of all subsequent accretions and developments. Its principal enemies were not Christians or Jews, few of whom it encountered, but fellow Muslims who declined to accept its authority. On them it had no mercy. The Wahhabis so fiercely disapproved of reverencing saints and shrines that in the early 1800s they destroyed the tomb of the Prophet himself, and they cherished a puritanical disapproval of drinking, smoking, luxuries and the modern world in general. Their simple creed appealed to Ibn Saud, as to many desert Bedouin, and the fundamentalist sharia  law became the basis of Saudi law and morals.

The rule that a man might have no more than four wives at a time, but could change them when he liked, also suited Ibn Saud, who had a prodigious appetite for women. He is said to have had about three hundred wives altogether, and he was a good father to forty or more sons who survived infancy, which most Arab children did not, and to an unknown number of daughters, whom no one seems ever to have counted. The oil wealth that poured into his coffers in his final years bewildered him. He was a frugal man himself and he feared that the money would corrupt both his family and the strict religious principles of his regime. He was seventy-three when he died in his sleep of a heart attack, at his palace at Taif, a summer resort high in the mountains above the Red Sea. He was buried in Riyadh in an unmarked grave as Wahhabi tradition demanded. After a few years, almost no one could remember which grave was his.