John Wilkes Expelled from the House of Commons 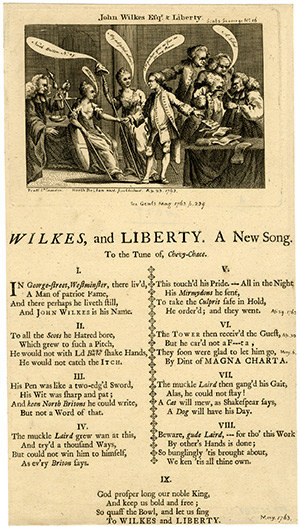 John Wilkes believed in liberty, freedom of speech and freedom of action. He was a keen member of the Hell-Fire club, which met dressed as monks to parody Roman Catholic rites and to enjoy women costumed as nuns. He was known for his wit and his reply to the Earl of Sandwich, who told him he would either die on the gallows or of the pox, is a classic: ‘That must depend on whether I embrace your lordship’s principles or your mistress.’

Wilkes was elected to the House of Commons in 1757. George III came to the throne in 1760 and presently chose Lord Bute, who had been his mentor, as prime minister. Wilkes started a weekly paper called the North Briton in which he attacked the administration and made libellous suggestions about Bute’s relationship with the king’s mother.

Bute resigned in 1763 and was replaced by George Grenville. In April that year Wilkes published the famous No. 45 issue of the North Briton in which he denounced the king’s speech to Parliament as a tissue of lies. The new administration’s ministers were outwardly his target, but many felt he had attacked the king himself and so unforgivably broken established convention. He himself remarked, invited to join a game of cards, that he could not tell a king from a knave.

Seeing a chance to silence him, the ministry had Wilkes arrested and sent to the Tower of London, but the Lord Chief Justice ordered his release on grounds of parliamentary privilege. Wilkes sued for damages and won. The ministers decided to cancel his privilege by expelling him from the Commons in 1764. They got hold of the proofs of his pornographic, blasphemous ‘Essay on Woman’, which Sandwich read aloud to the House of Lords. The Lords and the Commons condemned it as seditious and impious and in January the Commons carried a government motion expelling Wilkes from Parliament.

Wilkes went to France and in his absence was tried and found guilty of obscene libel. Now a popular hero and admired on both sides of the Atlantic, he returned and in 1767 was triumphantly elected MP for Middlesex to cries of ‘Wilkes and Liberty’. He then surrendered to the authorities and served time in prison. Expelled from the Commons again in 1769 for another alleged libel, he was re-elected three times in three successive months as Parliament refused to seat him. At last, in 1774, he became Lord Mayor of London, was again elected MP for Middlesex and was at last allowed to take his seat. Popular pressure had triumphed, so had Wilkes and so had liberty.