The Founding of the Red Cross Movement

The great humanitarian organisation was founded on 29 October 1863. 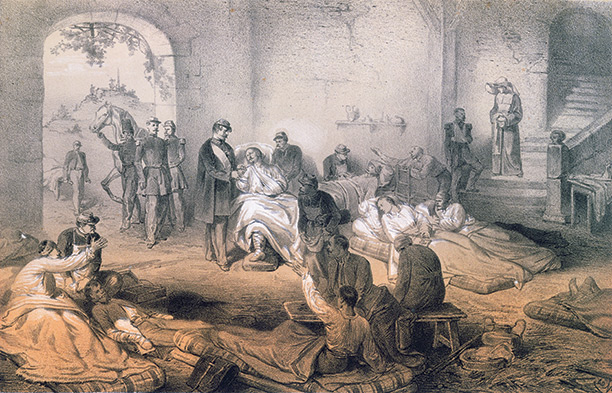 The Battle of Solferino, fought in northern Italy in 1859, was a decisive episode in the struggle for Italian independence, in the birth of the Red Cross movement and in the creation of the Geneva Conventions. The bloody battle between the Austrians and a French-Italian alliance lasted for hours before the Austrians were driven into retreat. The casualties have been estimated at anything from 30,000 to 40,000 men. Thousands of wounded were left on the battlefield, far too many for the victors’ small medical teams to cope with. It happened that a 31-year-old Swiss businessman named Henri Dunant was travelling through the area and was utterly horrified by the battle (which he afterwards said compelled young men to be murderers) and by its aftermath. He helped to organise people from the nearby villages to bring water, food and aid to the wounded, regardless of their nationality. He persuaded the French to release a few captured Austrian doctors to help and he paid for the hasty creation of makeshift hospitals.

In 1862 Dunant wrote an account of what he had seen in which he suggested that national armies should have efficiently trained non-combatant volunteers to give help to the wounded of both sides. He also wanted international treaties to guarantee the protection of those involved. He sent copies to important figures all over Europe and he made a strong impression.

Dunant came from Geneva, where he had grown up a devout Calvinist with a deep interest in charitable work. In his twenties he engaged in business activities in North Africa and Italy and helped to create the international Young Men’s Christian Association.

In 1863 the Public Welfare Association in Geneva set up a five-man committee to consider Dunant’s ideas. Gustave Moynier, the association’s president and a prominent local figure, and Dunant himself were the key members. The committee organised an international conference in Geneva in October to start things moving. Delegates from countries including Austria, France, Great Britain, Italy, the Netherlands, Prussia, Russia, Spain and Sweden attended and on the 29th approved the proposals of the committee of five. This effectively marked the launch of the Red Cross movement. The symbol of a red cross on a white background reversed the Swiss national emblem of a white cross on a red background. Later, in Muslim countries, the Red Cross would become the Red Crescent.

In 1864 the Swiss government organised a conference in Geneva at which delegates from European countries as well as the US, Mexico and Brazil signed the first Geneva Convention ‘for the Amelioration of the Condition of the Wounded in Armies in the Field’, which set up rules on the lines Dunant had advocated and would in time be accepted as international law by almost all the countries in the world. In that same year the first Red Cross volunteers in a battle wearing the Red Cross symbol attended an action in Denmark.

Dunant had been hugely successful, but the fly in the ointment was that he and Gustave Moynier had come to dislike each other intensely. From 1864 Moynier was president of the committee of five, which would subsequently become the International Committee of the Red Cross. He regarded Dunant as a romantic, impractical idealist and soon forced him out of the movement. Dunant had spent far more time on the Red Cross than on business and in 1867 he went bankrupt, which enabled Moynier to have him expelled from the committee. A warrant was issued for Dunant’s arrest on a charge of fraudulent bankruptcy. He left Geneva and was reduced to living in poverty in various European cities. Although he was awarded the Nobel Peace Prize in 1901, he was an almost forgotten figure when he died in 1910 in a Swiss nursing home at the age of 82.

Moynier had died that same year. Meanwhile the Red Cross movement had flourished. Its work began to extend from the military sphere to a far broader range of peacetime disasters and needs. The British Red Cross Society was founded in 1870 and the American National Red Cross Society in the US goes back to 1881. The First World War dramatically increased the need for the organisation and the Nobel Peace Prize was awarded to the International Red Cross Committee in 1917. There are now Red Cross and Red Crescent societies in almost every country in the world, with more than 90 million members, volunteers and staff. Henri Dunant’s reputation has been amply restored and he is now revered as the founding spirit of one of the greatest humanitarian organisations in history.