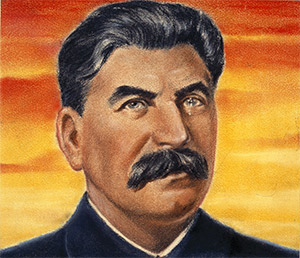 Just how many millions of deaths Joseph Stalin was responsible for is disputed, but that the figure runs into millions is not in doubt. To the end, when he was in his seventies and approaching his own death, his subordinates continued to carry out his murderous orders.

Stalin was paranoid in any case and in his later years he suffered from arterio-sclerosis. There’s a theory that this may have exacerbated his temper, which became ever more savage as he grew older. His doctor, Vladimir Vinogradov, noticed a marked change for the worse in Stalin’s health early in 1952. When he suggested that the dictator start to take things more easily, the patient flew into a furious rage and had him arrested.

Several other medical men were arrested in 1952. Some of them were Jewish and newspaper tirades against ‘murderers in white gowns’ provoked widespread rumours about a medical conspiracy. There were whispers of babies killed in maternity wards and patients being given poisoned medicines. In January 1953 the Tass press agency reported the arrest of nine members of ‘a criminal group of killer doctors’, accused of murdering prominent Soviet figures. Six of the nine were Jews. More doctors were arrested and although many of them were not Jewish, there was an outbreak of anti-Semitism and Jews were attacked in the streets. Stalin meantime was seriously considering a plan to deport all Soviet Jews to Siberia.

The accused doctors’ lives were saved by Stalin’s own death. He had begun to feel his age and tell his subordinates that he had not long left to live. His senior colleagues, their homes and offices bugged by the security police, were all terrified of him. At a meeting of the Central Committee of the Party in October 1952 Stalin announced that he was too old to cope any longer and asked to be relieved of his post as Secretary General. Georgi Malenkov, in the chair, paled for fear that the other members would not instantly stand up to protest and demand that the request be denied. Fortunately for him, they did.

Stalin left the Kremlin for his dacha at Kuntsevo, outside Moscow, in mid-February 1953, for the last time. There are conflicting reports of what happened, but after a routine night of heavy drinking until the early hours of March 1st, the guards became alarmed when there was no sound from their master all day and late in the evening a guard or a maid ventured in and found him lying on the floor of his bedroom. One account says he was conscious, but only able to make incoherent noises, and had wet himself. Nikita Khrushchev recalled that he and Malenkov, Beria and Bulganin went out to Kuntsevo after a telephone call from the guards to Malenkov. At the dacha they were told that Stalin had been put on a sofa in the small dining room ‘in an unpresentable state’ and was now asleep. The four men, embarrassed and not realising that anything was seriously wrong, went back to Moscow.

Not until the next day, with Stalin paralysed and speechless, were doctors summoned. Almost too frightened to touch him, they announced that he had suffered a massive stroke. Leading Politburo members went to the dacha every day, hesitating and dithering, apparently unsure what to do, while rumours spread that they or some of them had taken a hand in putting an end to the dictator.

According to his daughter Svetlana, who was at the bedside, at 9.50pm on the 5th Stalin’s eyes opened with ‘a terrible look – either mad or angry and full of the fear of death’. He raised his left hand, pointing upwards, perhaps threateningly, and then death took him. It was announced on the radio the next day, with appeals for calm, and the funeral was held in Red Square on March 9th in the presence of a huge crowd – so large that some were crushed to death. Stalin’s veteran colleague Vyacheslav Molotov, whose wife was in a prison camp where she was known as Object Number Twelve, spoke in praise of the dead tyrant. So did Malenkov and Beria, but in private Beria made no secret of his relief at the dictator’s passing. Stalin’s body was embalmed and was presently put on display with Lenin’s corpse in the renamed Lenin-Stalin Mausoleum.

Malenkov, Molotov and Beria had taken steps to secure their own positions. At a meeting on March 6th Malenkov was appointed Chairman of the Council of Ministers. Molotov was to be foreign minister. Beria, appointed minister of internal affairs, organised an exhibition for members of the Central Committee at which tapes of Stalin’s conversations with security police were played and the late dictator’s responsibility for the arrest of innocent officials was clearly established. Nothing was said in public as yet, but the demolition of Stalin’s image had begun.