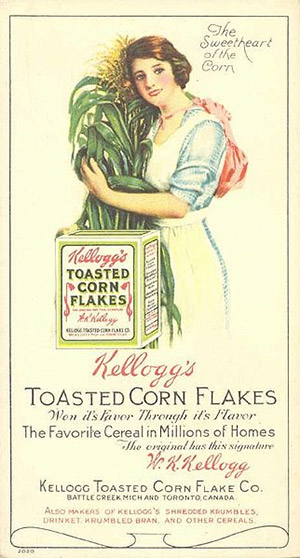 John Harvey Kellogg and Will Keith Kellogg were brothers from a Seventh-day Adventist family in Battle Creek, Michigan. They had little education, because their parents expected Christ’s Second Coming before they would need it, but John Harvey managed to get a medical degree. He was a fanatical advocate of what he called ‘biologic living’, which involved vegetarianism, no alcohol or tobacco, no tea, coffee or condiments and minimal quantities of eggs and dairy products.

In his middle twenties he became president of an Adventist sanitarium at Battle Creek and practised his principles on the patients, who found the diet so monotonous that he, his wife Ella and his brother W.K., who was eight years younger, started experimenting with cereals. They set up the Sanitas Food Company and tried out products which included slow-baked cereal Granola biscuits, wheat flakes and cornflakes, peanut butter and a cereal-based coffee substitute. They stumbled on the wheat flakes, which they called Granose, by accident one night in 1894 when trying to manufacture an easily digestible form of bread. Granose was the world’s first flaked cereal product. Cornflakes made from toasted maize followed in 1898 and a version with a longer shelf-life in 1902.

The Kelloggs at first sold their products mainly by mail order to their ex-patients, but then began advertising in newspapers and on billboards, while rival entrepreneurs invaded the promising market and copied the Kellogg lines. An ex-patient of the sanitarium named C.W. Post made Grape Nuts, based on the Granola biscuits, and a cereal-based drink called Postum patterned on the Kellogg coffee substitute. By 1900 his Postum Cereal Company was making $3 million a year.

Competition waxed fierce and more than forty cereal companies were launched in the United States in the early 1900s. John Harvey Kellogg was not really interested in business, but in reforming American eating habits. The taciturn, austere W.K., on the other hand, was a born businessman and resented playing second fiddle to his more flamboyant brother, from whom he bought the rights to the manufacture of cornflakes. In 1906 W.K. founded the Battle Creek Toasted Corn Flake Company. He spent heavily on advertising, including a campaign telling the reader to ‘wink at your grocer and see what you get’. What you got was a free sample of W.K.’s cornflakes. The campaign increased sales by a factor of fifteen in New York City and the company was rapidly profitable, but John Harvey’s Sanitas company continued in business and the brothers fell out over the Kellogg name, which they both used. In 1911 W.K. succeeded in a lawsuit to gain exclusive use of the Kellogg name in the United States, later extended to international markets after a legal battle that lasted from 1916-21. W.K. had started selling Bran Flakes in 1915 and All-Bran in 1916 and his firm was the Kellogg Cereal Company from 1922.

W.K. had been joined by his son John L. Kellogg, who invented All-Bran and streamlined the company’s operations until his father forced him out in 1925, partly for moral turpitude after John L. divorced his wife and married one of the office girls and partly because John L. got interested in oat-based products, which W.K. disapproved of. None of John L.’s successors lasted long under W.K.’s critical eye until in 1930 the old man gave a majority interest in the company to his charitable organization, the W.K. Kellogg Foundation. When W.K. died in Battle Creek in 1951, aged ninety-one, Kellogg’s was the world leader in its field.