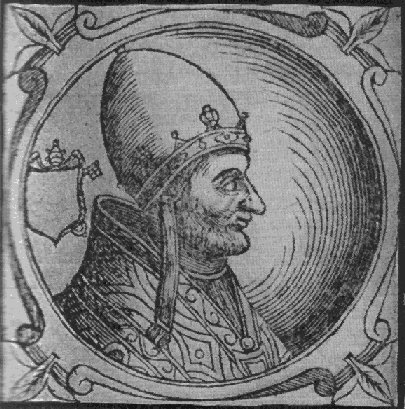 According to one report, Adrian IV died after choking on a fly in his wine, but quinsy (an inflammation of the tonsils) is the more commonly accepted explanation. Nicholas Breakspear was the only Englishman ever to occupy the chair of St Peter, elected in December 1154. He was mainly preoccupied with preserving papal authority against both Frederick Barbarossa, whom he crowned Holy Roman Emperor in 1155, and the Norman king of Sicily.

When Adrian died at Anagni, near Rome, perhaps close to his 60th birthday, some 30 cardinals gathered on September 4th to choose his successor. The conclave split between the supporters of Cardinal Rolando of Siena, a trusted ally of the late pope, and those of Cardinal Ottaviano de Monticelli. Cardinal Ronaldo favoured supporting William, king of Sicily, against Frederick Barbarossa, while Ottaviano leaned the opposite way. At that time the accepted convention was that a new pope must be elected unanimously and the assembled cardinals argued the matter for three days without reaching agreement.

Sharply differing accounts of what happened were given by the contending factions, but on September 7th a majority of the cardinals proclaimed Cardinal Rolando pope as Alexander III. According to Rolando’s supporters afterwards, only three cardinals voted for Cardinal Ottaviano, including him, but it seems likely that the number was rather larger. When Rolando’s electors tried to invest him with the purple mantle of his new office, Ottaviano snatched it from him and armed men, organised by the imperial envoy in Rome, burst into the church. Pope Alexander and his supporters fled to the castle of Sant’ Angelo, while the cardinals remaining behind elected Ottaviano to the papacy as Victor IV. Alexander was soon rescued and escorted out of Rome, to take refuge in Sicily and later in France, while Victor IV controlled Rome. It took until 1177 before the schism was finally resolved and Alexander III was everywhere recognised as the true pope. In 1179 the Third Lateran Council decided that papal elections should in future require a majority of only two-thirds.