End of the Hundred Years War

The succession of conflicts known as the Hundred Years War ended on October 19th, 1453, when Bordeaux surrendered, leaving Calais as the last English possession in France. 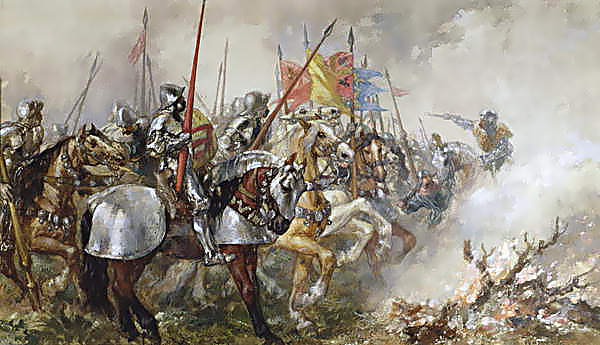 As historians do not fail to point out, it was not a single war that lasted for a hundred years, but a sporadic succession of wars on the same theme. Apart from naval engagements and coastal raids, it was fought entirely on French soil and is thought to have reduced the population of France by perhaps half. The profitable English export trade in wool and cloth to Flanders was a significant factor, but the struggle centred on the French possessions of the kings of England and their claim to be kings of France. When the last of the Capetian kings, Charles IV, died in 1328, the nearest male relative was his nephew Edward III of England, whose mother was Charles’s sister.

The French nobility, however, swiftly accepted Philip of Valois as King Philip VI, not because Edward III’s claim lay through a woman, it seems, but because he was English and unsuitable. He was only fifteen years old, had only just succeeded in England in dubious circumstances and had plenty to occupy him at home. Edward did homage to Philip for Aquitaine and Ponthieu in 1329, but in 1337 Philip confiscated them to punish him for harbouring Philip’s cousin and enemy, Robert of Artois. This is the conventional starting point of the war, in which the English won brilliant victories at Crécy in 1346, Poitiers in1356 and Agincourt in 1415. The high point of English fortunes came when Henry V took control of Paris, Normandy and much of northern France, married Charles VI’s daughter and forced the French king to accept him as regent of France and successor to the throne.

Henry and Charles both died in 1422. The French dauphin made himself king as Charles VII with inspirational support from Joan of Arc. Henry VI was the only English king ever to have been crowned King of France in France – at the age of ten in Paris in 1431 – but gradually the territory across the Channel slipped out of English control. In 1436 the English lost Paris and by 1450 the French had recovered Normandy. In 1451 the French overran Aquitaine and took Bordeaux, which had been in English hands for three hundred years and ran a thriving wine trade with England. A deputation of citizens sailed to England in 1452 to ask Henry VI for help. A force some 3,000 strong under John Talbot, Earl of Shrewsbury, duly arrived in October and was welcomed by the citizens, who turned the French garrison out.

The English recovered most of western Gascony, but in July 1453 a French army defeated Talbot at Castillon and Talbot himself, a paladin greatly admired by French and English alike, was killed.

When it was clear that no more help would come from England, Bordeaux surrendered in October, to pay a heavy fine and leave Calais as the last English possession in France. This marks the conventionally accepted end of the war. The Wars of the Roses soon kept the English occupied and when an English army next landed in France, in 1475, Louis XI bribed it to go home again. The French finally recovered Calais itself in 1558.

The long struggle powerfully strengthened the sense of national identity in both England and France, and created a mutual antagonism which has lasted ever since. England was left to develop parliamentary democracy and an empire as an offshore island, separate from the rest of Europe, though the English kings still officially claimed to be kings of France all the way down to George III.