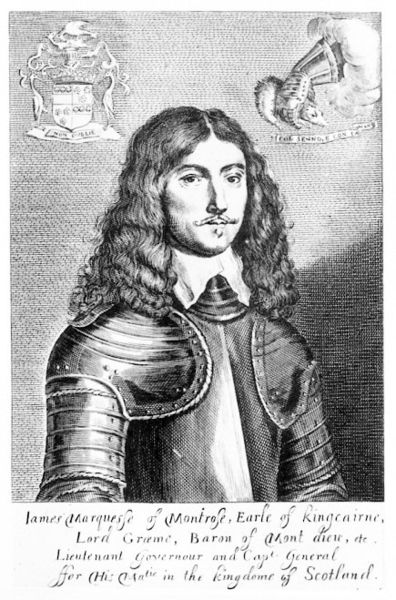 James Graham, Marquess of Montrose, soldier, poet and one of the most romantic figures in British history, led a campaign of dashing brilliance as Royalist captain general in Scotland against the Covenanters and his bitter personal enemy, the Marquess of Argyll, in the summer of 1645. With a small swift-moving force of Highlanders and Irish, he ran audacious rings round his opponents until September, when he was finally pinned down and defeated by superior numbers at Philiphaugh in the Borders.

Montrose escaped to the Continent, but he was a man of action who fretted in the safety of exile, and in 1650 he returned to the Highlands to fight for Charles II. He failed to raise the clans in sufficient numbers and in April he was trapped and routed at Carbisdale. After wandering in the hills with the hue and cry out against him, so hungry that he was reduced to eating his gloves, he took refuge at Ardvreck Castle with Neil MacLeod of Assynt, but there was a substantial reward to be earned for him and Macleod surrendered him to the authorities. Macleod got his money and his name has stunk in Scottish nostrils ever since.

Montrose's captors moved him south by Inverness and Dundee, preceded by a herald who proclaimed, "Here comes James Graham, a traitor to his country". Mounted on a carthorse, he reached Edinburgh on a cold Saturday afternoon in May, in the presence of a huge crowd. At the Water Gate he was met by the hangman, transferred to the hangman's cart and tied to the seat, to be taken through the streets to the Tolbooth prison. Argyll was watching from a house on the route and the two men's eyes are said to have met for a moment as the cart trundled by. Far from stoning and reviling the prisoner, as had been hoped, the watching crowds were silent, and observers sensed an air of reluctant admiration and sympathy. The cart reached the Tolbooth prison about seven o'clock in the evening. Montrose spent the Sunday in his cell, pestered by Presbyterian ministers, who renewed their assault on Monday, when he was taken to the Parliament to hear the death sentence.

On Tuesday morning Montrose rose for the last time on earth and made himself ready. Carefully combing out his long hair, he was reproached by one of the Puritan divines for paying so much attention to his appearance at such a time. "My head is still my own," Montrose replied. "Tonight, when it will be yours, treat it as you please". At two in the afternoon he was taken on foot along the High Street to the Mercat Cross, where a gallows 30ft high had been erected on a platform. The condemned man was dressed in his finest scarlet and lace, with white gloves, silk stockings, ribboned shoes and his hat in his hand. He was thirty-seven years old and, according to one observer, he looked more like a bridegroom than a criminal. Another saw in him "a gallantry that braced the crowd". He was not allowed to address the spectators, for fear of what he might say. He gave the hangman some money, his arms were pinioned behind him and he climbed the ladder. His last words were reported as "God have mercy on this afflicted land!" Tears were running down the hangman's face as he pushed him off.

The body was left hanging for three hours and was then cut down and dismembered for the limbs to be sent for public display in Stirling, Aberdeen, Perth and Glasgow. The head was cut off and fixed on a spike on the Tolbooth, where it remained rotting for eleven years, when Argyll's head took its place. The rest of the carcass was buried in a box on the Burgh-Moor, from where it was rescued after the restoration of Charles II and given honourable interment in the High Kirk of St Giles, where a noble monument marks the grave today.