The last person burned to death at the stake for heresy was executed on April 11th, 1612. 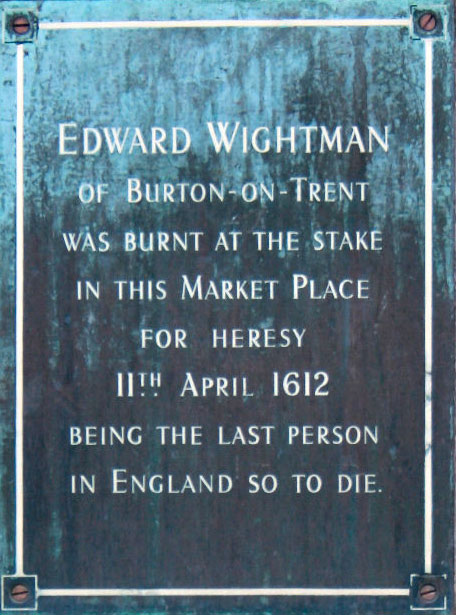 Edward Wightman was well-known in Puritan circles in Burton upon Trent, Staffordshire in the early 1600s, where he began proclaiming increasingly heretical opinions. He reportedly did not believe that human souls went to heaven or hell after death but remained with the body in the grave until the Day of Judgment. As his pronouncements grew odder and odder, his Puritan friends remonstrated with him in vain and he attracted the attention of the authorities. In 1611 he spent months in prison, interrogated at intervals by the Bishop of Lichfield, Richard Neile, and William Laud (the future Archbishop of Canterbury) among others.

Wightman seems to have denied the doctrine of the Trinity, denied that Jesus Christ was God, denied the Resurrection and the legitimacy of Holy Communion and maintained that he himself was both the Holy Spirit and, though not himself divine, the Messiah appointed by God as the saviour of the world. From a modern perspective it seems clear that he had gone completely insane.

Wightman was eventually put on trial in the diocesan court in Lichfield, which in December pronounced him guilty of blasphemy and of promoting the heresies of figures ranging from Simon Magus to the Arians, the Manicheans and the Anabaptists. He was sent to the stake in the square in Lichfield in March 1612. When the flames began to scorch him he cried out in pain and it was thought he wanted to recant. Some of the crowd of spectators rushed to rescue him, though getting burned themselves. He was taken back to prison to recover, but when he was brought before the court again he refused to sign a formal recantation and on Easter Saturday in April he was sent back to the stake and was this time burned to death.

Wightman’s son and two grandsons emigrated to America in the 1650s and were ancestors of various people called Wightman or Whitman, allegedly including the poet Walt Whitman.