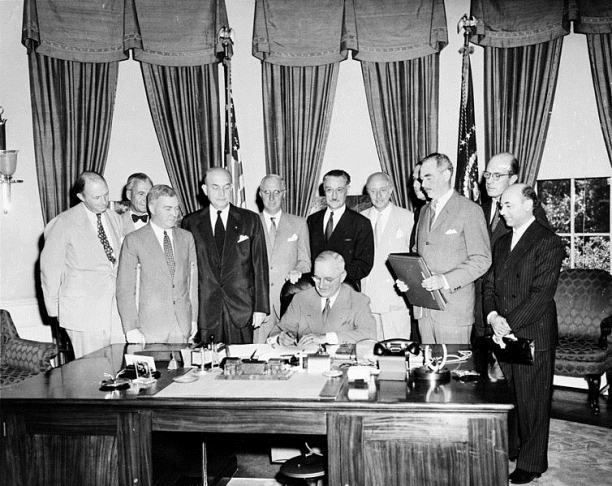 The North Atlantic Treaty, signed by twelve nations on a Monday afternoon in Washington DC, saw the United States accept the lead in the free world's postwar resistance to Communist aggression and subversion. Unprecedented in American peacetime history, it was the product of more than a year of political and diplomatic activity in which leading roles were played by Senator Vandenberg and General Marshall of the United States, Ernest Bevin of Britain and Lester Pearson of Canada.

The Treaty bound its signatories to treat an armed attack against any one of them as aggression against all and to react with any action necessary including armed force. It was drawn up by a working party of diplomats from the United States, Great Britain, Canada, France, the Netherlands, Belgium and Luxembourg, which began work in July 1948 and produced a draft text in December. Representatives of these countries and five more (Italy, Portugal, Norway, Denmark and Iceland) signed the treaty at a long mahogany table in front of the twelve national flags in the auditorium of the State Department building on Constitution Avenue. A distinguished audience 1,500 strong watched as Paul Henri Spaak signed first for Belgium, followed by Pearson for Canada. Robert Schuman stepped up for France and Bevin and Dean Acheson, the US Secretary of State, signed last. Each foreign minister used a different pen. In his speech President Truman described the new treaty as 'a shield against aggression and the fear of aggression - a bulwark which will permit us to get on with the real business of government and society, the business of achieving a fuller and happier life for all our citizens'. The ceremony was simple and impressive, though Sir Nicholas Henderson, one of the working party, deprecated the 'insouciant influence' of the US Marine Band, which played Gershwin tunes, including 'Bess, you is my woman now' in apparent homage to Mrs Truman, who had a front-row seat.

The Treaty had still to be ratified by the US Senate, which approved it on July 21st, after almost two weeks of debate. It was powerfully commended by Senator Vandenberg for the Republicans and Senator Connally of Texas for the Democrats, and opposed by Senator Taft of Ohio, who argued that it entailed 'arming Western Europe at American expense'. The final vote was eighty-two votes to thirteen in favour, which supplied the necessary two-thirds majority. President Truman signed the instrument of accession and the North Atlantic Treaty Organisation (NATO) was duly established with its secretariat in France.