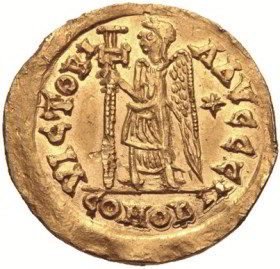 The Germanic peoples from across the Rhine who swarmed into the Roman Empire in the fourth and fifth centuries included the Franks, whose name seems to have meant ‘ferocious’. The Salian Franks proved the strongest of the Frankish tribes, under their Merovingian dynasty of kings, tracing its descent from a semi-legendary figure called Merovech. They founded modern France and were known as ‘the long-haired kings’ because by tradition they never cut their hair; a story developed that traced their ancestry back to the Trojans. Their most important ruler was Clovis I, who took control of much of Roman Gaul. His name in Frankish was Chlodovec. It was Latinised as Ludovicus, which evolved into Louis; it was to become the most common name for French monarchs.

Clovis was born about 465 and succeeded his father Childeric in 481, when he would have been 16 or so. The Merovingians at that point controlled the area around modern Tournai and Cambrai along today’s Franco-Belgian frontier where the Salian Franks had been settled since about 350. Clovis was clearly an exceptionally formidable leader and warrior, who set about bringing the other Frankish tribes under his sway. The defeat of the last Roman commander in northern Gaul in 486 secured his control of the area between the Somme and the Loire.

The main authority on Clovis’ life and achievements is Bishop Gregory of Tours, writing 50 years and more after Clovis’ death. According to Gregory Clovis was a pagan but in 493 he took a Christian wife from Burgundy, a devout Roman Catholic called Clotilde, who persistently urged her husband to abandon his pagan gods. He refused until 496 when, in serious danger of losing a battle, he called upon Jesus Christ for help, promising to become a faithful Christian in return, and the enemy immediately started to run away. Clovis kept his word, was duly baptised a Roman Catholic and according to Gregory thousands of his warriors followed suit. Some modern historians think Clovis may earlier have flirted with the Arian version of Christianity, but he certainly turned Roman Catholic and began the long and complicated history of relationships between the kings of France and the popes in Rome.

Clovis failed to subdue Burgundy, but in the early 500s he attacked the Visigoths in southern Gaul, took Bordeaux and reduced much of modern Aquitaine to obedience. He made shrewd use of the support of his Roman Catholic bishops to cement his power. His capital was Paris, where he died when he was about 46 and was buried in the Church of St Genevieve he had founded there. Clotilde survived until about 544, was buried beside him and was revered as a saint. The Merovingian dynasty ruled most of modern France for another 200 years.