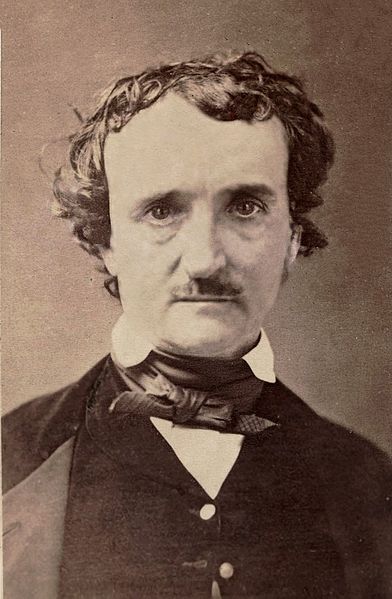 The last days of the short, drunken, quarrelsome and unhappy life of Edgar Allan Poe were almost as grim as one of his own macabre stories. Drink was Poe's nemesis, allied with poverty after his rich guardian cut him off with nothing, his inability to hold down a job and the tragedy of his young wife Virginia, or 'Sissy' as he called her. She married him in 1834 when she was only thirteen and he was twenty-seven, and already a heavy drinker. In 1842 she fell ill with tuberculosis and the prospect of her inevitable death wore desperately hard on Poe's nerves. He took refuge from the strain in the bottle. In 1847 Sissy finally died.

Desperate to find a replacement, Poe pursued virtually every woman who came in view. In 1848 he considered proposing marriage to Elmira Shelton, a widow with whom he had fallen in love years before when he was a university student. Her father had prevented a match between them then because the couple were both still in their teens. However, there now appeared on the scene Sarah Helen Whitman, a wan, blue-eyed literary spinster, who lived in Providence, Rhode Island, and floated through life in silks, lace, wafting veils and a cloud of fumes from the ether with which she dosed herself for a real or imaginary heart condition.

Helen Whitman, who had long been devouring every published line of Poe with what she called 'horrified fascination and avidity', sent the author a poem of homage, an adaptation of his own 'The Raven'. He sent her a poem back (one he had originally written to someone else) and in September he went to Providence to meet her.

Within a few days he told her he loved her and pressed her to marry him. She said she needed time to think it over and sent him a succession of unsatisfactory letters until eventually Poe tried to kill himself with an overdose of laudanum. Helen accepted him in November, but only on condition that he stopped drinking. He tried, but she knew he was failing the test and one day in December he arrived at her house the worse for wear. The next day they had a scene, she inhaled enough ether to knock her senseless and her mother sent him packing.

'My life seems wasted,' Poe wrote miserably in the spring of 1849, 'the future looks a dreary blank.' He was forty years old. In the summer he went to Philadelphia, plunged into an orgy of drinking and suffered terrifying hallucinations. 'For ten days,' he wrote, 'I was totally deranged.' Eventually he managed to borrow enough money to get to Richmond in July. There he proposed to Elmira, enrolled himself in the Richmond branch of the Sons of Temperance and bought a wedding ring, though he remained in a deeply gloomy state of mind. Whether Elmira would really have married him is in doubt, but near the end of September he set off on a trip to New York, leaving Richmond for Baltimore on the first leg of the journey. After meeting some Baltimore friends for a convivial glass of whisky, he disappeared for six days.

No one knows what happened to him until he was found in an Irish tavern named Gunners Hall on October 3rd, stupefied with drink and wearing badly fitting trousers, a soiled and crumpled shirt, a dirty hat and an expression of vacant stupidity. It looked as if he had sold his own clothes to buy drink. He was taken to the Washington Medical College hospital in a carriage and arrived at five o'clock in the afternoon in a stupor. By the early morning hours, he was delirious, pale and sweating profusely, and talking incessantly to imaginary things on the walls of the room. He seems to have remained in this state until three in the morning of October 7th, a Sunday, when he appeared to relax, said quietly 'Lord, help my poor soul', and died. He was buried with little ado in Baltimore's Presbyterian Cemetery. Hearing the news in France, Charles Baudelaire commented that Poe's death was 'almost a suicide, a suicide prepared for a long time'.