After spending almost half her life in exile, the former Queen of Spain died on 9th April, 1904. 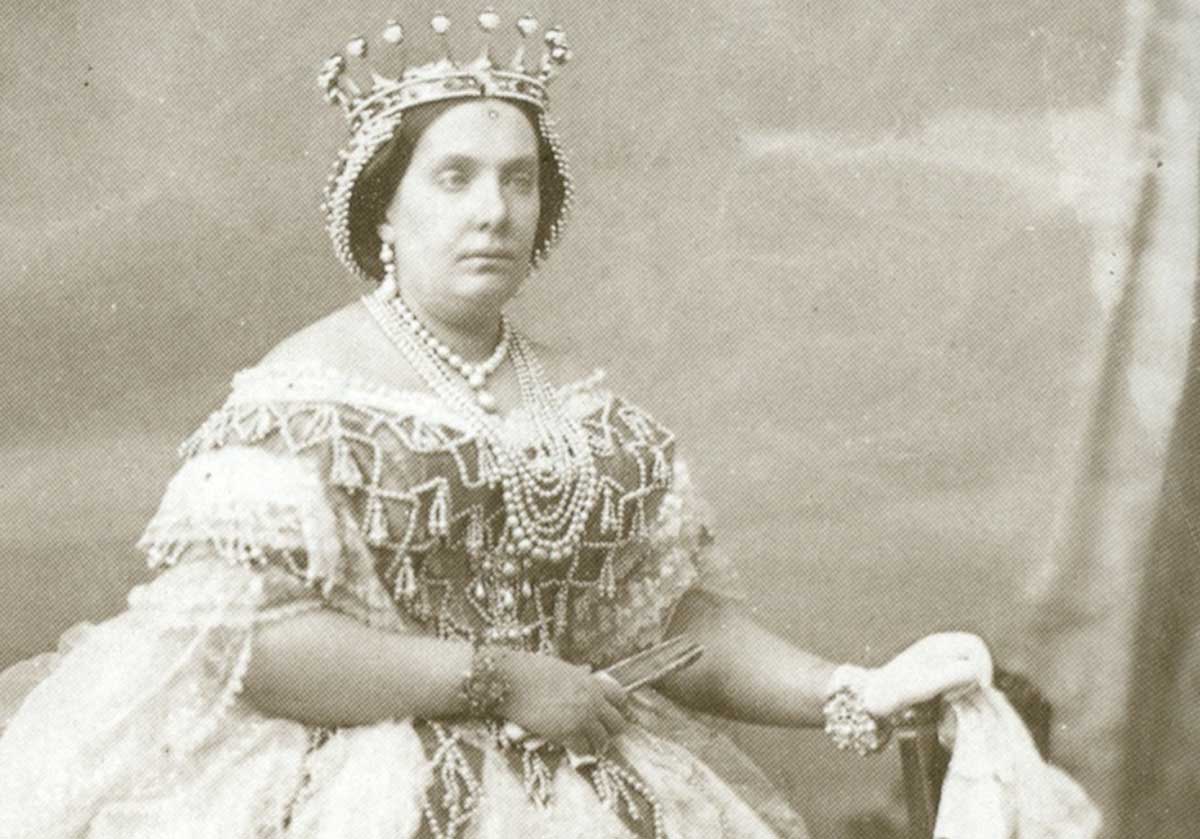 Queen of Spain from the age of three, Isabella II abdicated after thirty-six years of more or less ceaseless turmoil, and spent almost half her life in exile in France, though she characteristically never learned to speak French properly. Her accession as a baby in 1833 in succession to her father, the autocratic Ferdinand VII, precipitated seven years of civil war with the Carlists – the staunchly Catholic, traditionalist supporters of her uncle, Don Carlos.

Isabella’s first regent was her mother, who weakened her position by morganatically marrying a shop-keeper’s son and by her reputation for ruthless greed – she was involved in the Cuban slave trade. In 1840 she was ousted by General Baldomero Espartero. There were mutinies in the army and an attempt to kidnap the young queen from the royal palace in Madrid, possibly inspired by her mother. In 1843 Baldomero was sent packing by other army officers and the thirteen-year-old Isabella was declared of age. On her sixteenth birthday, at the urging of her mother and Louis Philippe of France, she was married to her Bourbon cousin, Prince Francisco de Asis, a pious hypochondriac widely believed to be impotent. Louis Philippe contrived to marry his son to Isabella’s younger sister at the same time in the hope that Isabella would have no children and a grandson of his would one day rule Spain. Isabella was fun-loving, cheerful, wilful, ill-educated and plump. The marriage was an almost instant failure and Isabella’s fondness for a handsome young general named Francisco Serrano was soon noticed. A second Carlist civil war broke out and military men continued to dominate the government during palace and political intrigues, and one uprising after another. Scandalous reports  spread about the queen’s numerous lovers. Historians castigate her for frivolity and incompetence, but still she managed to hang on until 1868, when her refusal to allow the self-styled Progressives to form a government provoked a revolution.

Isabella was at her summer residence in San Sebastian, whose blossoming as a resort under royal patronage was perhaps her principal contribution. With her was her latest lover, Carlos Marfori, a former actor. She found herself deserted by her generals, including Serrano, and fled by train to exile in Paris. Her husband and Marfori went with her and she bought a house in the Avenue Kleber and christened it the Palais de Castille. There two years later she abdicated in favour of her teenage son, Don Alfonso. Who his father was is a good question, but he prudently went off to study soldiering at Sandhurst.

There followed a ludicrous interlude in which Prince Amadeo of Savoy was the nominal ruler, popularly nicknamed King Macaroni because he spoke Spanish with an Italian accent. When he resigned in despair in 1873, Spain became an anarchic republic until the military restored order the following year, turned the parliament out and, to general relief, put Isabella’s son on the throne as Alfonso XII. She returned to Spain briefly, but was not allowed to exercise any influence. There was yet another Carlist civil war in the 1870s and Alfonso died in 1885.

In Paris in March 1904, while recovering from influenza, Isabella received a visit from another ex-monarch, the Empress Eugenie of France. It was a cold day, the room was draughty and Isabella’s condition took a serious turn. Eventually the papal nuncio gave her extreme unction and her last words were, ‘I think I am going to faint’. She was seventy-three.