Richard Cavendish charts the events leading up to the execution of Marin Falier, Doge of Venice, on April 18th, 1355. 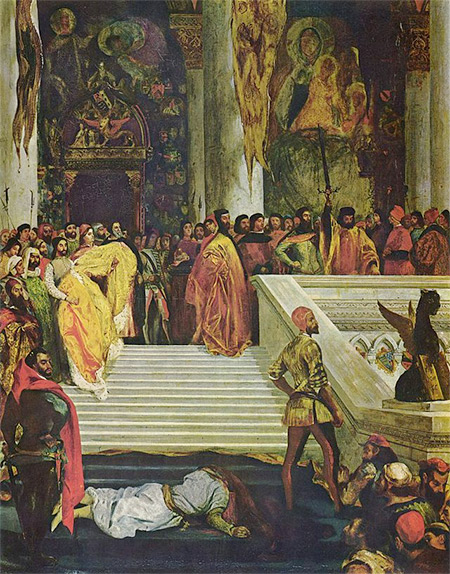 When he was elected doge in 1354, Marin Falier was a veteran of 76. Two of his family had held the office before him and he himself had done the Republic much service. He had been a member of the Council of Ten, commanded Venetian land and naval forces, and acted as governor of provincial towns. Currently ambassador to the papal court at Avignon, he was known for his tetchiness and readiness to take offence – he had once irritably slapped the face of a bishop who had turned up late for an official procession. The moment he returned to Venice to take up the crowning office of his career, things began to go wrong.

The new doge arrived in a fog so blinding that he could not land in proper state from his barge and had to be transferred to a small boat and put ashore at the wrong place, which was not consonant with his dignity. Within a month he was forced to accept substantial limitations on the doge’s powers. At a state banquet before Lent, a young man of patrician family got so drunk that Falier had him escorted out, but he left behind on the doge’s throne a piece of doggerel verse to the effect that Falier had to pay for his attractive and considerably younger second wife, while other men enjoyed her.

Falier took this far more seriously than was sensible and when the offender was let off with only a light punishment, he considered it an intolerable insult. The director of the Arsenal complained that he, too, had been grossly insulted by mannerless young nobles and a plot was hatched against the whole patrician class. Rumours of an imminent attack by a Genoese war fleet were to be spread for the night of April 15th and in the alarm and confusion, a band of armed men, led by a member of the doge’s family and ostensibly acting to protect him, were to kill as many nobles as they could and then proclaim Falier as Prince of Venice.

The plot leaked to the Council of Ten, which acted with ruthless efficiency. Reliable citizens were quietly called to arms. All those thought to be implicated were arrested and ten of them were promptly hanged in a row from the windows of the doge’s palace. Marin Falier himself admitted his guilt and was beheaded at the top of a staircase leading up from the inner courtyard. His corpse was shown to the citizens before being placed in an unmarked grave, with the severed head between the knees. The traitor doge’s portrait in the council chamber was replaced with a painted black veil. It impressed Byron in 1819 and he made a verse-drama of the story, which Verdi turned into an opera.