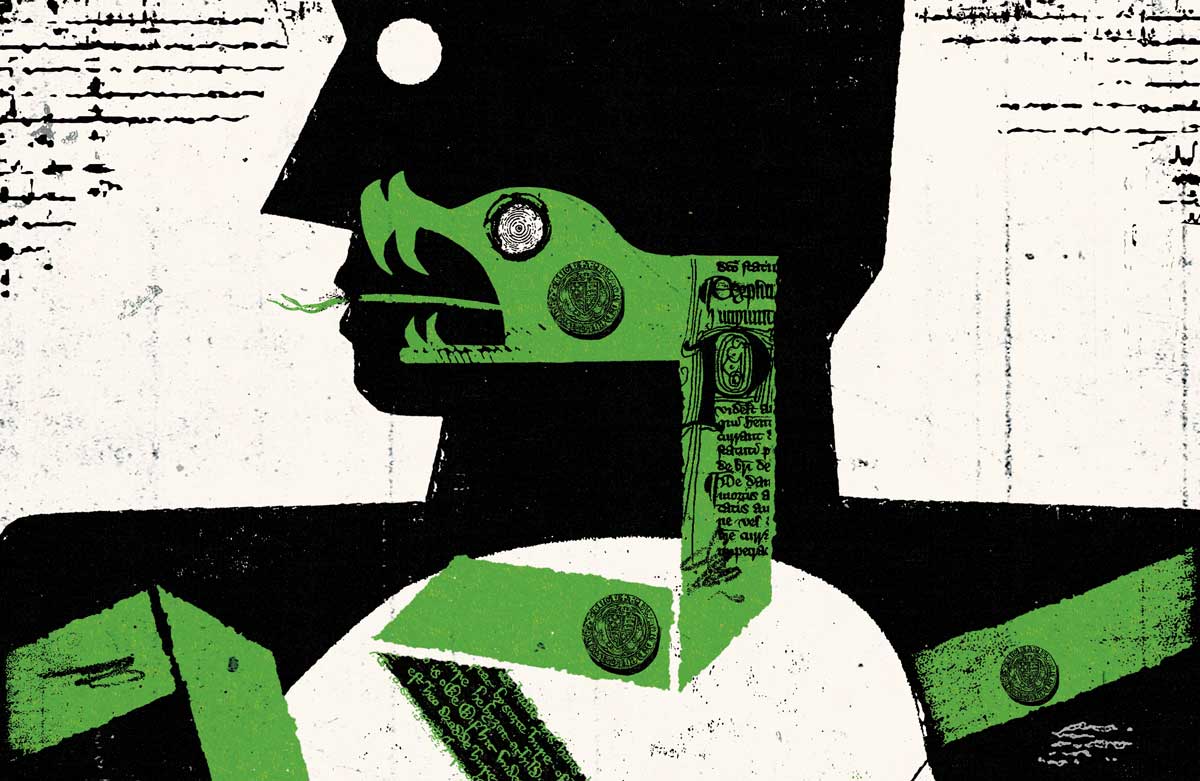 It is not often the case that a medieval English poet makes headlines in the New York Times, or is a trending topic on Twitter. But this is what happened in October 2022 when two new legal documents were unveiled relating to the life of later medieval England’s most famous poet, Geoffrey Chaucer. As Euan Roger, principal medieval records specialist at the National Archives, explained in his announcement of the discovery, the unearthed records clarify the relationship between Chaucer and Cecily Chaumpaigne. Chaumpaigne is best known to Chaucer scholars as the woman who may have accused the poet of rape or abduction more than 600 years ago and then released him from all charges in exchange for a substantial payment of ten pounds.

Before October the only known legal documents regarding Chaucer and Chaumpaigne had painted an incomplete yet troubling picture. On 4 May 1380, Chaumpaigne, a London baker’s daughter, filed a quitclaim, a formal renunciation releasing Chaucer of all charges de raptu meo  ‘relating to my raptus’. Raptus is an extremely difficult term to translate in this context: initially a word for robbery or snatching away, it could refer to rape, abduction or a range of other forms of bodily seizure and coercion.

Although a handful of other records connected with this case have since come to light, none have clarified the meaning of raptus in the quitclaim. In fact, the circumstances surrounding the case were rendered even more suspicious by Christopher Cannon’s 1993 discovery of a second document filed by Chaumpaigne three days later. This document (a memorandum of the originally recorded quitclaim) was nearly identical in its description of the charges, except that the phrase ‘de raptu meo’ was absent. In its place was a general statement releasing Chaucer from all charges de feloniis transgressionibus compotis debitis (‘relating to felonies, trespasses, accounts, debts’), as well as any other charges that Chaumpaigne might have had against Chaucer up to that date.

Less than two months later, Chaucer’s friend John Grove filed documents promising to pay ten pounds to Chaumpaigne. No reason for the payment was given, but it struck some scholars as suspicious that, so soon after Chaumpaigne had released Chaucer from legal charges, one of his influential friends had promised to pass money to her. Might the poet have had something to hide?

Such a possibility was not out of the question. Financial settlement was a common way to resolve criminal rape charges in later medieval England. With convictions rare but harshly punished (by castration, hanging or other forms of severe bodily harm, although these penalties were seldom carried out), accepting a sum in exchange for dropping rape charges was a way for victim-survivors to receive some form of restitution for the harm they had suffered.

These documents have inspired heated debate among Chaucer scholars, heightened by the fact that the original case of the raptus charge has not been found. So contentious was the possibility that the so-called ‘father of English poetry’ might have been guilty of rape that more than one scholar remarked that they wished the quitclaim of 4 May 1380 had never been found. As Adolphus William Ward declared, ‘Such discoveries as this … we might be excused for wishing unmade’.

This controversy, which has raged for a century and a half, is why the newly discovered documents are so important: they are not simply records related to Chaucer’s life, but have the potential to shed light on one of the most disturbingly mysterious episodes of his lifetime. They provide new information about how Chaucer and Chaumpaigne knew each other in the first place, along with credible evidence that the original charge of raptus might relate to a labour dispute between Chaucer, Chaumpaigne and a man called Thomas Staundon, rather than to Chaucer’s possible rape or abduction of Chaumpaigne.

The first newly discovered document is dated 16 October 1379 and outlines the charges brought by Staundon against both Chaucer and Chaumpaigne under the Statute and Ordinance of Labourers, originally enacted to regulate wages and employment after labour shortages resulting from the Black Death. As the writ explains, Staundon claimed that, in violation of the statute, Chaucer was employing Chaumpaigne after she had left Staundon’s service before the agreed end of her employment with him. Staundon noted that although Chaucer had been requested to return Chaumpaigne to her original place of employment, he had not done so. The second new document is dated 9 April 1380 and is a warrant in which Chaumpaigne appoints two attorneys to represent her in order to answer the charge brought by Staundon. One of the two attorneys, Stephen del Falle, also represented Chaucer against Staundon’s claims.

The most striking thing these new documents tell us is that, contrary to what has been believed for 150 years, Chaumpaigne and Chaucer were – at least in this instance – on the same side of a legal dispute and one that primarily concerned labour rather than abduction or sexual assault. This information gives us an entirely new context within which to consider their relationship: medieval labour.

But there is much that these new documents do not entirely clarify. Exactly why was the word raptus used in Chaumpaigne’s quitclaim releasing Chaucer of legal responsibility? Why was it removed three days later from the memorandum recording the quitclaim? And how did Chaumpaigne’s experience in Staundon’s and Chaucer’s employment accord with (or diverge from) the experiences of countless medieval servant women who suffered sexual harassment, abuse, exploitation and assault from their male bosses in a time when those who paid for women’s domestic labour frequently felt entitled to their bodies as well?

Numerous legal cases illuminate the sexual mistreatment that male employers inflicted on their female servants. The legal historian Gwen Seabourne has discussed a case of workplace sexual harassment from York in 1363 in which a Thomas de Queldale sued his former servant, Elena de Hustwayt, for leaving his employment ‘before the end of her contracted term’. Like Staundon in his own suit against Chaumpaigne and Chaucer, Thomas de Queldale claimed that Elena and her new employer had violated the Statute and Ordinance of Labourers. Elena countered that she had left Thomas’ employment because he had repeatedly made unwanted sexual advances toward her, or frequenter solicitavit ipsam ad cognoscend’ ipsam carnaliter contra voluntatem suam (‘frequently solicited her for sex against her will’). As Seabourne notes, the (all-male) jury sided with Thomas and determined that Elena had illegally broken her contract with him.

In another case from 1571 a 15-year-old servant named Joan Bellinger reported that her employer, Stephen Jeffrey, had exposed himself and then raped her in his parlour one evening while his wife was out to dinner. When she protested that he was hurting her, Jeffrey replied, ‘No Joane I do not hurt thee, for this dothe me good and thee no harm’. Three respectable townswomen examined Joan and reported that she had indeed suffered genital trauma.

Medieval cases such as these are not outliers. Rather, they give us a glimpse of the entitlement with which employers often viewed the bodies of their female servants, who were regularly stereotyped as sexually available. The Statute and Ordinance of Labourers rendered these women especially vulnerable because it left them open to prosecution for breaking contracts with their employers, even when those employers were abusive. Legal cases featuring servant women’s claims of mistreatment (which are likely to represent only a fraction of these experiences) are vital evidence of the pervasive social attitudes about employment, entitlement, servant women and sexual access in medieval England. It is thanks to the new information uncovered by Roger and Sebastian Sobecki that we can now draw on the evidence of servant women’s treatment in order to investigate Chaumpaigne’s experiences.

If scholars may have long wished the initial discovery of the quitclaim ‘unmade’, the newly found life-records demonstrate the importance of clarifying historical evidence with new discoveries, rather than by sweeping others under the carpet. Though much remains unclear regarding the Chaucer-Chaumpaigne case, what has been demonstrated is how much as-yet-unearthed treasure may lie in collections such as those of the National Archives. What is also clear is how crucial collaboration can be to findings such as these. The story of how the discovery was made began with a conversation over coffee about something Sobecki had noticed: an apparent change of handwriting in the memorandum of 7 May 1380. The detail led Roger on a quest into the archives, where he would ultimately find two new life-records among dozens of fragile parchment scraps wadded and bundled together. As he and the medievalist Andrew Prescott have observed, thousands of files and bundles have yet to be sorted and consulted, some of them stored ‘deep in salt mines in Cheshire in varying degrees of arrangement’. Much of this material still requires conservation. But who knows what other discoveries might be made in their pages?