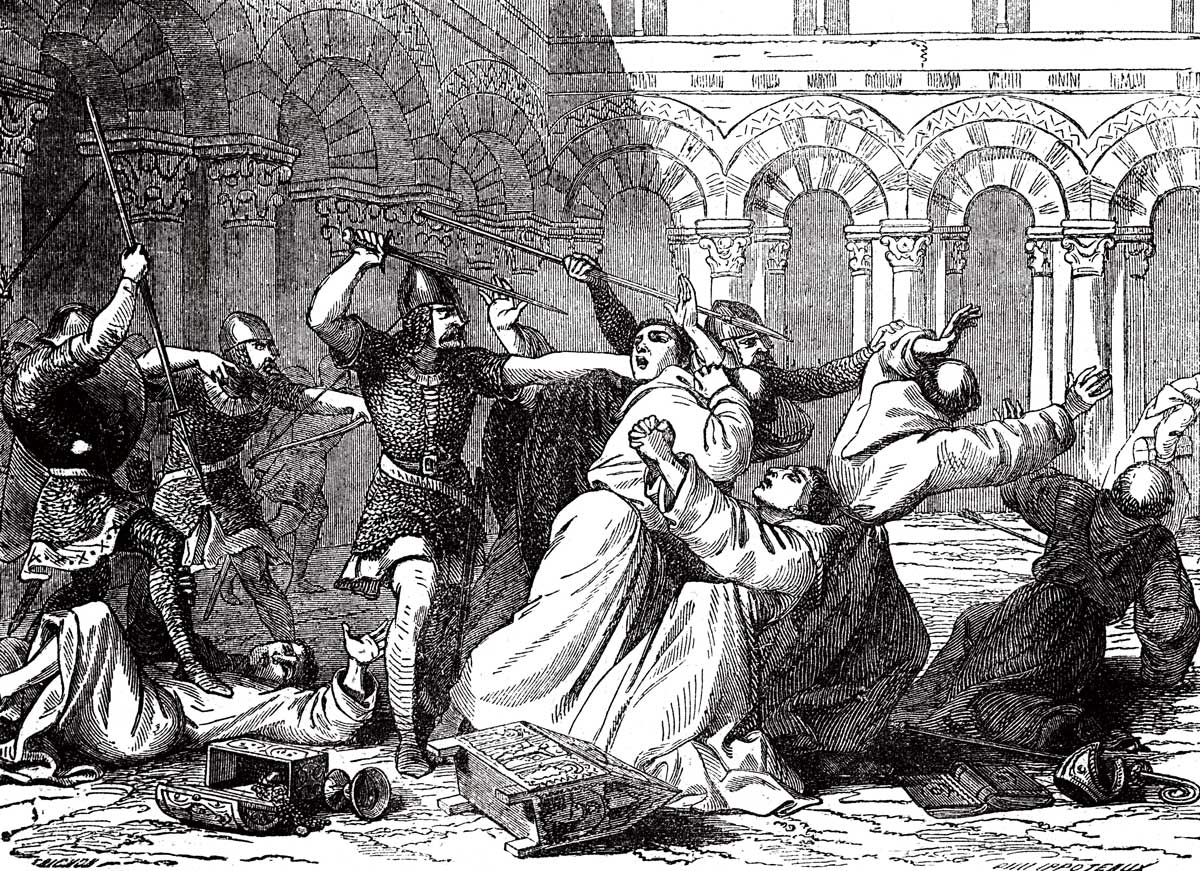 The northern diaspora we call the age of the Vikings is testament to the mobility of early medieval Europe. So, too, is the fact that the best contemporary account we have of the Viking raid on Lindisfarne, off the Northumbrian coast, on 8 June 793 comes from the court of Charlemagne in distant Aachen.

Alcuin, a Northumbrian monk and scholar in the service of Charlemagne, wrote several letters and a verse lament on the subject. Shock courses through all of them. ‘The distress of your suffering fills me daily with deep grief’, he wrote to Higbald, the Bishop of Lindisfarne. ‘Heathens desecrated God’s sanctuaries and … trampled the bodies of saints in God’s temple like animal dung in the street.’

Looking back, Alcuin remembered portents in the weather: bloody rain over the minster in York during Lent; sheets of light rushing through the air; whirlwinds and fiery dragons in the firmament. Then there were the words of the biblical prophet, Jeremiah: ‘Out of the north an evil shall break forth.’

Yet it seems clear that the Vikings took the monks by surprise. No one thought, Alcuin said, such an attack could be made from the sea. The raiders dug up the altar and stole the church’s treasures, a later source tells us. They killed some of the monks and stripped others naked. Many were drowned in the sea. Some, including children, they took back to their boats in chains, perhaps to ransom, perhaps to sell into slavery.

It wasn’t simply the violence that shocked. It was also the choice of target. Founded around 635 by the Irish monk Áedán from the community on Iona, Lindisfarne was at the heart of the north’s Christian regeneration. The house’s reputation for austerity and devotion was embodied by one of Áedán’s successors, Cuthbert, perhaps the most beloved of Anglo-Saxon saints. After the raid, the Lindisfarne monks took St Cuthbert’s body on a 200-year-long peregrination around the north before finding a home at Durham. His shrine remained a major site of pilgrimage until Henry VIII’s men destroyed it; like the Vikings before them, they could see only the worth of its gold.