Men who spent their working lives underground found a new world of freedom in racing birds. 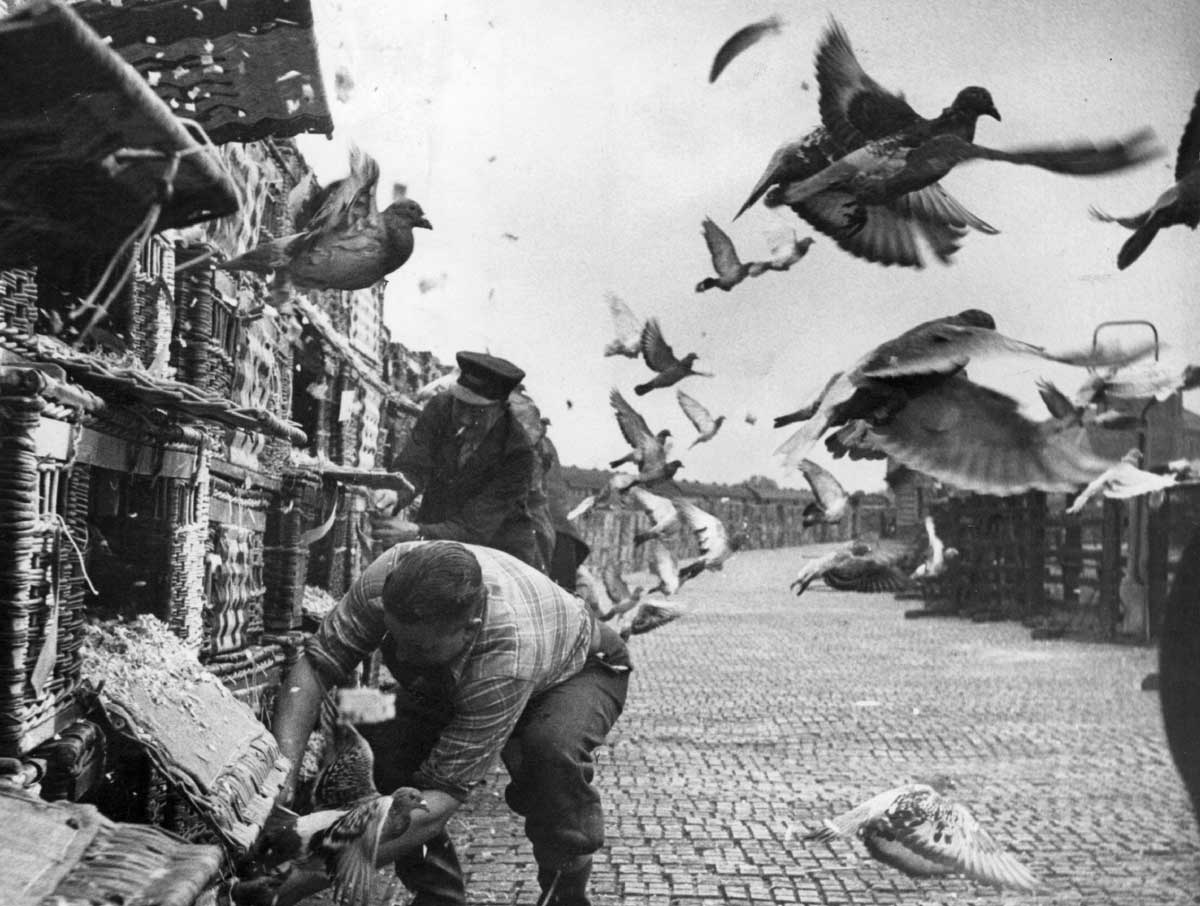 In Ron Berry’s 1982 story ‘Time Spent’, Lewis Rimmer, a 57-year-old Welsh miner, decides to die among his pigeons. After ‘nigh on 30 years’ hewing coal in the Fawr pit, his lungs are full of dust and, since he can no longer work, the mine is forced to make him redundant. He is entitled to compensation and, as he is reminded, the union should help out, too. But the thought terrifies him. His whole sense of meaning – his value as a ‘man’ – comes from being a collier. Unable to talk to his wife, he slouches out to his pigeon loft in the garden. It is the only other place he feels ‘himself’. He is closer to the birds than to anyone. Opening the hatch, he shoos them out gently. Then, as they swoop low over the valley, he curses quietly, puts a shotgun in his mouth and pulls the trigger.

Berry’s story is a harrowing portrait of the human cost of coal mining in South Wales during the industry’s dying days. It lays bare the health problems, financial pressures, family tensions and psychological strain felt by many miners. But it also shows how closely those experiences could be reflected in miners’ relationships with their pigeons and how much can be learnt about the social history of mining from the sport of pigeon racing.

Homing pigeons are known to have been used to carry messages since the earliest times. In 776 BC the victors at the first Olympic Games were announced to cities throughout Greece by pigeons and Julius Caesar is said to have used them on his campaigns. In the 16th century they conveyed messages across the Ottoman Empire and by the early 19th century they were carrying news across the English Channel. It is no accident that, in 1815, word of Napoleon’s defeat at Waterloo was brought to London by pigeon.

It was not until slightly later that the idea of racing homing pigeons for sport took hold. It was most likely introduced to Britain by Belgian racers, who were releasing their birds from as early as 1819. Yet it did not really get going until the arrival of the electrical telegraph, a little over a decade later. With birds no longer needed to carry information, traders, newspapers and government agencies sold their stock on, making them more readily available to early hobbyists.

Pigeon racing appears to have first put down roots in the south of England. The documentary record is patchy, but some of the first people to keep birds are found in London. Weavers in Spitalfields were rearing pigeons for flying no later than 1830. From there, the practice spread northwards. By 1850 it was so well established in Bolton that it attracted the attention of public health officials; by 1860 it had reached Derbyshire; and in 1877 it made its first known appearance in Northumbria.

By then, races had already become a weekly activity in many parts of the country. They were, at first, short-distance affairs and generally involved enthusiasts from a single village or community. The set-up was rudimentary. The birds were taken to a pre-determined location, usually no more than ten miles away, and then released to fly back to their coops. When they arrived, their owners had to take them to an agreed meeting point, often a pub or shop. The first to get there was the winner. Later, longer races, organised along more formal lines, became the norm. In this case, trains were used to take the pigeons to the starting point; rings were attached to the birds’ legs to aid identification; specialised clocks were brought in to record the exact time of arrival; and winners were determined based on average speed, rather than arrival at a second, arbitrary, location.

Participants could come from all walks of life. Longer races, in particular, tended to attract people from a wide range of different backgrounds. In 1892 a club in Newcastle counted doctors, businessmen and colliery managers among its members and, in 1899, the Prince of Wales even won a race in Lerwick. But, from the beginning, shorter races were dominated by working men and the sport as a whole continued to be seen as a stereotypically working-class activity. As one Wigton racer put it, pigeons were ‘the poor man’s racehorse’. Miners – especially in South Wales, northern England and central Scotland – were among the most ardent racers. Towards the end of the First World War, Jeff Bell recalled that, in his Cumbrian mining town, ‘everybody had a small loft …and we used to race from about a hundred and fifty mile’. A few years later, a Welsh miner estimated that in Rhondda villages, there were four or five lofts in every street.

On a wing and a prayer

For these communities, pigeon racing was only possible because of dramatic transformations in the material conditions of working-class life. The passage of the 1874 Factory Act, introducing the 56.5-hour working week for women, and of the Coal Mines Regulation Act of 1906, limiting colliers to an eight-hour day, created the leisure time needed to undertake the arduous task of rearing and training a bird. So, too, the extension of the rail network in the 1840s and 1850s opened up the possibility of affordable travel and made long-distance races practicable for the first time. The abolition of taxes on newspapers in 1861 fostered the growth not only of mass-circulation newspapers, but also of the specialised journals essential to the bird enthusiast.

Pigeon racing was, however, a demanding sport, which most miners were able to pursue only with difficulty. Space was the most obvious problem. Pigeon lofts took up a lot of room. Today, most pigeon racing organisations recommend that each bird has a minimum of ten cubic metres of air; but even in the 19th century, when estimates were lower, the necessary volume could still be considerable. Most miners simply did not have the space; the few that did often struggled with unclean conditions. As George Orwell pointed out in 1937, miners’ homes in northern England tended to be old, insanitary and cramped. Of the ten examples he provided – from Wigan, Sheffield and Barnsley – most were too damp or dangerous for the attic to be of any use and none had a yard. Such conditions were, admittedly, not always typical; but Orwell nevertheless gives some sense of how difficult it could be simply to build a loft in older housing, right up until the eve of the Second World War. Newer, social housing was little better. Although Orwell recognised that ‘Corporation’ flats and houses were of markedly higher quality, residents were usually forbidden to keep either poultry or homing pigeons, usually because of the supposed risk to health. Occasionally, racing organisations managed to negotiate a compromise. But, even then, many enthusiasts felt that additional space had been won only at the cost of prohibitive restrictions.

Money was an even greater challenge. In comparison with other working-class pastimes, pigeon racing was expensive. Lofts cost a pretty penny. There were also clocks to buy or rent, baskets to carry the pigeons in; and, of course, the birds themselves. In the 1880s, miners looking to buy a pedigree bird could pay anything between £5 and £20. By the 1920s, prices had dropped somewhat; but, even then, reasonable quality pigeons cost in the region of 25s-£10. Membership of a club – essential for those who wanted to compete – was not cheap, either. In 1925 the Oughtibridge Homing Society in Yorkshire charged an annual fee of 17s; and it cost extra to race. Then there was the food. While a pigeon could do well enough on simple seeds, which could be found, cadged or bought in most villages without much difficulty, serious racers preferred a more sophisticated – and expensive – diet. Taken together, all this meant that pigeon racing was simply beyond the means of many miners. Orwell estimated that the average weekly earnings of a Yorkshire miner was £3 10s 6 ½d. After basic expenses had been met, little – if anything – was left for leisure activities. For those who raced pigeons, it entailed considerable financial sacrifice. More often than not, the families of racers often had to make do on little more than a wing and a prayer.

Why, then, was pigeon racing so popular among miners? One obvious explanation is the excitement it offered. Though there was no instant gratification, as with football or darts, miners could wax lyrical about the deferred thrill of seeing a long awaited pigeon return to the loft. Gambling added to the anticipation. Long-distance races, sometimes involving hundreds of competitors, could carry large prize pots; and side bets between friends and rivals were common. In shorter races the prize money was necessarily much lower; but food and drink were usually wagered on the result.

Another possible explanation is the skill which pigeon racing involved. Breeding birds, training them to return to their loft, choosing their feed and managing their exercise required not only great patience, but also detailed knowledge. Some miners made it their mission to learn as much as possible about their birds and took pride in developing their own, highly idiosyncratic, techniques. In 1930 one person interviewed by Mass Observation explained that, before each race, he followed the same routine. On Wednesday he gave his birds ‘two cod liver oil capsules’ to empty the bowels; then on Thursday, he fed them a cake made from 11 different types of seeds, washed down with a nip of sherry. The rest of the week was spent carefully examining the bird’s excrement to check that it was the right colour.

Sociability was important, too. No racer was ever an island. Enthusiasts would gather in kitchens and yards to discuss techniques or check pedigrees. At club meetings, often held in a pub, shared interests could blossom into lasting friendships. Indeed, for William Anderson, friendship was by far the ‘biggest reward’ of pigeon racing.

Perhaps most intriguing is the release it allowed from a culture of masculinity, based on an image of the miner as both a breadwinner and a ‘tough man’, which could be emotionally isolating. Despite the affirmation that could be derived from association with other men and the strength of affection which bound households together, miners frequently found it difficult to relate to their families. Many children remembered their fathers as taciturn and distant, unsure how – or if – to articulate emotion, as is evident in Lewis Rimmer’s gruff, even cold, relationship with his wife.

As the historian Martin Johnes has argued, pigeon racing offered a means of overcoming this. It was an opportunity to nurture and care for another creature, to delight in delicacy and softness and to take pleasure in silent companionship. In many cases, it also provided an excuse to spend time with sons and daughters. Routine tasks were given out as chores and the secrets of pigeon-keeping were shared. As the Welsh poet Gwenallt put it, pigeon racing turned ‘the worker into a living person’.

In the decades after Gwenallt wrote these words, pigeon racing among miners declined in step with their industry. Following the vicissitudes of the Second World War and the pit closures of the 1970s and 1980s, it lost much of the popularity it once enjoyed. Yet – as Berry’s story illustrates – it remained deeply entwined with the experiences of mining communities; and it continues to do so today. Historians seeking to understand the complex, often conflicted, world of the miner ignore it at their peril.