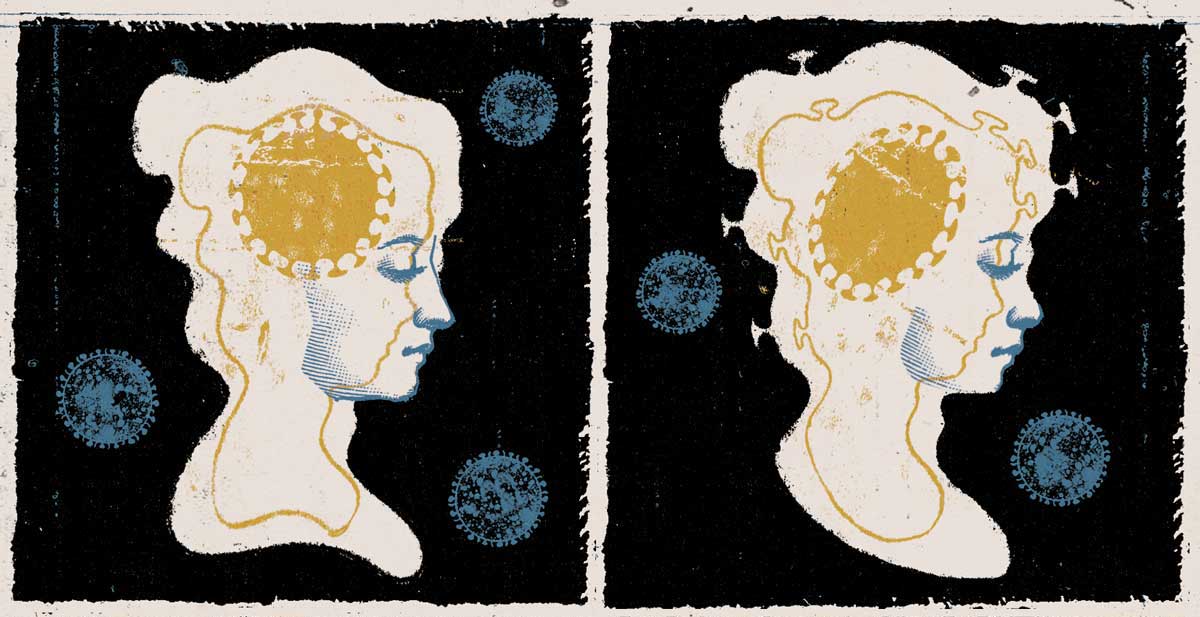 The Spanish Flu is thought to have killed 50 million worldwide between 1918 and 1919, but there was a hidden impact on mental wellbeing. A century later, as the Covid-19 virus took hold in the early months of 2020, health organisations and mental health service providers began to warn of its deleterious effects on mental health. Frustrations and boredom arising from the impositions of lockdown, anxieties relating to finances and general health and the increased difficulties in accessing specialist mental health services for those that needed them have all been cited as potential triggers. With the global nature of the pandemic, the World Health Organization is just one of many national and international bodies to offer advice and support on this often-overlooked aspect of the novel coronavirus. In medical circles there has been concern from the start about the possible longer-term neuropsychiatric implications of having the virus. We know from the Spanish Flu that this is a very real danger, but, more than just acting as a warning, the past can also help us recognise the complex interplay of social, economic, physical, medical and psychological factors that arises in such situations.

By the time the 1918 pandemic hit Britain, the links between influenza and mental wellbeing were already understood. During the 1890s, American doctors had begun to identify the longer-term neurological impact of the 1890-91 Russian Flu pandemic. And, given the recurrent nature of seasonal flu, texts in this period included its psychological symptoms in their overviews of its causes and treatment. It is little wonder, then, that in 1918 British public health authorities and medical professionals immediately highlighted mental health problems as both a symptom and a consequence of the virus. The Times reported that, as had been the case in the 1898 flu outbreak, ‘a swift loss of mental capacity, an inability to think coherently, was the most distressing symptom’, but it would later also comment on the longer-term after-effects. In an article entitled ‘Influenza Depression in 1919’, The Times’ Medical Correspondent reported that ‘one of the features of the present influenza wave is the marked depression it leaves behind it’.

As a result, the psychological influence of the Spanish Flu became intimately entwined with its physical effects. While prevention efforts such as masks were employed, the combination of mental and physical debility together appeared to open the door to a second infection.  Indeed, a 1918 piece in the Sketch, an illustrated weekly publication, described the flu as ‘almost as much a mental disease as a physical complaint’. To treat the infection, it recommended ‘something for the mind’, along with food and stimulants for the body. In this case, the suggestion was reading a novel, up to one a day, but there were others who commended cycling as a ‘mental tonic’ and attending the theatre as a ‘means of mental healing’.

According to a tongue-in-cheek piece in the Tatler, a magazine aimed at high society, a new dress and a new hat, ‘along with the necessary treatments and tonics, goes a long way to getting over the dreadful convalescent stage’.

For what ails you

Proprietary medicine and dietary supplements appeared, reflecting this wider understanding. Those that purported to be flu remedies stressed their role as mental pick-me-ups as well as physical ones. One 1919 advert claimed Phosphorene, a tonic wine in liquid or tablet form, prevented the ‘terrible nervous collapse’ so peculiar to influenza epidemics. Similarly, Brand’s Essence of chicken, mutton or beef, which is still available in some forms today, was said to ‘quickly remove that terrible “Depression”, which is so liable to bring on a relapse’.

While some companies made capital from the widespread outbreak in 1918, similar bold claims about products had been made before then. In 1909, for example, Celrox Tonic Wine claimed to guard against the ‘disastrous results of influenza’, including ‘depression, debility, sleeplessness, nervousness, tiredness and headaches’. In some cases, it was difficult to distinguish the mental from the physical impact; something as true in our current pandemic as it was in the early 20th century.

All of this suggests that people in the past merely needed to be aware of the impact on wellbeing and to take the appropriate measures to escape the worst of it. There can be little doubt that the timing of the Spanish Flu only added to the anxieties of the general populace, many of whom were trying to come to terms with the shocking losses and grief of the First World War. This ready market for off-the-shelf nostrums, however, only draws our gaze away from the truly devastating consequences of infection.

No amount of tonic, or reading, or cycling could prevent the onset of flu-induced mental health issues, some as serious as psychosis and, some have even postulated, encephalitis lethargica. A 2003 study of mental hospital patients in Norway in 1918-23, for example, has shown increases in admissions for those whose insanity was caused by influenza or pneumonia, while a team from King’s College and Johns Hopkins universities, with uncanny timing publishing their findings as Covid 19 hit, have shown the longer-term neuropsychiatric impact of post- and perinatal Spanish Flu infection. With studies such as these, perhaps we should not be surprised when we read that a team from UCL have recently shown that, in the 21st century, it is likely that Covid-19 increases the potential for brain damage and strokes in some cases.

Death and the pandemic

Admission to care settings during a pandemic could even have unintended consequences. Just as some contemporary institutions, such as care homes for the elderly and for people with learning disabilities, have been especially devastated by Covid-19, so were asylums in the early 20th century. The infection spread throughout Britain’s network of asylums and some were hit harder than others. While there were 11 ‘thankful’ asylums – to borrow a term from those villages who had escaped any deaths in the 1914-18 conflict – that at Menston, near Leeds, recorded 88 deaths, roughly 4.5 per cent of the total institutional population. A 1918 government report commented that in some places nearly all staff and patients were affected and – in another notable parallel with today – difficulty obtaining additional assistance meant staff ‘exhibited a commendable devotion to duty’. The number of deaths across the whole of the institutional estate for England and Wales was at least 1,320.

Yet death not only visited people with mental health issues within institutions. For those afflicted by the social, economic and emotional effects of influenza, grief, or the anxiety of the times or their situation, a new danger hoved into view. ‘In the current [pandemic]’, wrote Sir Thomas Horder, assistant physician at St Bartholomew’s Hospital in London in 1919, it was ‘the higher centre of the nervous system that was chiefly affected … Marked depression is common’, he continued, and ‘emotional instability is often seen, and is by no means rare’.

Similarly, research in the US, drew connections between some suicides and the pandemic. Again, despite the armoury of medicines, treatments and advice described above, we can get a sense of how difficult some people found living in the pandemic world from coroners’ inquests into sudden deaths. Although coroners’ verdicts generally attributed suicide to ‘temporary insanity’, 1918-19 saw a climb in the number ascribed to influenza. This is all the more poignant when the overall statistics for suicide in England and Wales actually dropped dramatically during the First World War, only reaching a fresh peak in 1934, at the time of the Great Depression.

Important here is the age range of those involved. While at the moment Covid-19 appears physically to affect mainly older people, the Spanish Flu disproportionately affected young adults. Mental pain, on the other hand, not only cut across age groups and socioeconomic backgrounds, it also illustrates the long tail of symptoms which were correlated with Spanish Flu. ‘Frederick’, a 26-year-old painter, jumped out of a window in the midst of flu related delirium. ‘Mabel’, a single woman aged 22, was found drowned in a canal ‘whilst in a depressed condition from influenza’. In 1926, ‘Sir Howard’, 55, took his life after experiencing two or three attacks of the flu, which had left him very depressed and ‘worrying very much about his health’. The link between influenza and suicide became so familiar that when ‘Edith’, a 40-year-old housewife married to a policeman, cut her throat in 1928, the local paper dubbed her ‘another victim of the after-effects of “flu”’. A taskforce was established in Britain in 2020 to try to address an anticipated increase in suicide, but will that be enough?

Covid-19 has invoked echoes of the Spanish Flu of 1918-19. It has reminded us that the need to socially distance and to wear protective equipment can go some way to warding off a dreaded second spike or wave. We have been largely shielded from seeing UK images of the novel coronavirus, but we have witnessed the shocking footage from Italy to America which reminds us of the awful toll on life and health. These things are rightly key to understanding Covid-19 and its effects, but we need also to consider the mental health of people directly and indirectly impacted by the illness. Vulnerable groups should certainly be at the forefront of our thoughts, but we should also be aware of the hidden impact on mental wellbeing that could be with us for years to come. Age, both in 1918-19 and today, is an important part of that, but the impact on mental wellbeing in and after lockdown, infection and post-Covid unemployment is less clear. We know from Spanish Flu that the neuropsychiatric effects of pandemics – including depression and greater reliance on mental healthcare – are likely to appear. What also seems clear is that post-Covid-19 mental health issues will be the product of an interplay of factors; factors that will need to be a higher priority in the midst of talk about national and global recovery.