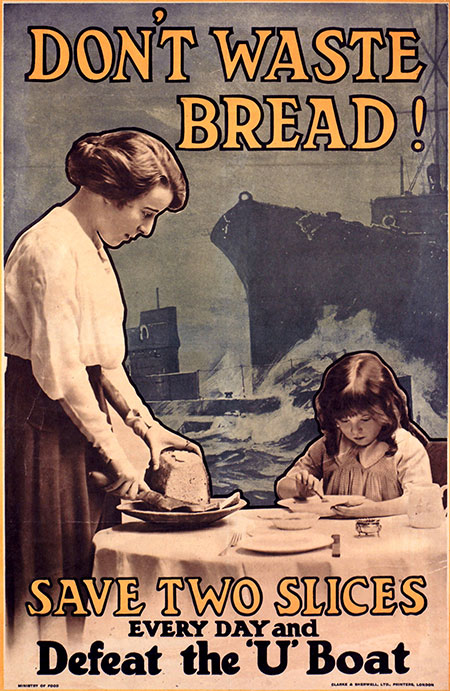 More than three years after the outbreak of the First World War, on February 3rd, 1917, the recently appointed Food Controller, Lord Devonport, announced the first government-sponsored system of food control. Unlike Germany, which had introduced rationing early in the conflict, there was a reluctance to do so in Britain, as it went against the prevailing Liberal principles of free trade. Instead, responsibility for food was delegated to the Board of Trade, which saw the answer to the food problem in the maintenance of a steady supply of imports rather than restrictions.

Newspapers and periodicals carried notices appealing to the patriotism of British consumers. The Daily Mail and several other publications printed the same article on different dates in August 1914 on war economy, proclaiming that: ‘It has become a patriotic duty as well as a wise precaution to reduce expenditure all round, to jettison luxury in money, food, fuel and the rest.’ Although the term war ration was used from early on, there was no official line on what this might mean. Instead, there was an expectation that patriotism would guide consumers only to buy what they needed and not as much as they could afford.

Furthermore, there was little action taken against rising prices – an increase of 65 per cent between summer 1914 and summer 1916 – and there were no official measures ensuring equitable distribution of food. It was argued that problems in the food supply were not caused by disruptions to imports but that people were being unpatriotic and wasteful in their consumption. In consequence, the Robertson Committee, led by John M. Robertson, Liberal MP for Tyneside and, until 1915, parliamentary secretary to the Board of Trade, was set up to examine the situation. It concluded that, contrary to the arguments of the Board of Trade, the war was responsible for shortages, both in terms of declining imports and the increased requirements of the army. Following this report, the government relented and in October 1916 a Food Department was established within the Board of Agriculture and Fisheries.

As late as November 1916, however, the Asquith coalition was rejecting the need for a Food Controller. want orders, not requests. It might be a finer thing if each individual did her bit in the economy line without compulsion, but it’s human nature that we don’t.’ This growing discontent with the availability of food undoubtedly contributed to the collapse of Asquith’s government and one of the first items on the agenda of the new government under David Lloyd George was the appointment of Hudson Kearley Ewbanke, Lord Devonport,as Food Controller at the new Ministry of Food.

There had been a poor harvest worldwide in 1916, reducing the amount of grain available for both human and animal consumption; the reduced levels of food for animals in turn caused a decline in the levels of meat and dairy products. Coupled with an increasing German U-Boat campaign, which caused difficulties for the importing of food, the supply situation in Britain was declining rapidly. An article in the popular women’s periodical Home Chat in December 1916 encapsulated the frustrations of consumers. Entitled ‘Why Don’t They Make Us Do It?’, the author, Hilda M. Love, argued: ‘We want orders, not requests. It might be a finer thing if each individual did her bit in the economy line without compulsion, but it’s human nature that we don’t.’ This growing discontent with the availability of food undoubtedly contributed to the collapse of Asquith’s government and one of the first items on the agenda of the new government under David Lloyd George was the appointment of Hudson Kearley Ewbanke, Lord Devonport, as Food Controller at the new Ministry of Food.

One of the first actions by Lord Devonport was to implement a system of voluntary rationing with officially prescribed limits. Hilda M. Love’s follow up article in Home Chat, ‘Coming out Strong’, published in the week before the announcement, celebrated this development, saying: ‘We women have asked for restrictions, have said we would welcome anything to aid a speedy victory, and we’ve now got as good as we asked for.’ In his announcement of February 3rd, 1915, which was carried in full in The Times and summarised in other national newspapers, Devonport once again appealed to the patriotism of consumers:

Economy is not only a patriotic duty, but a necessity. Extravagance is obviously unpatriotic. The power to purchase does not constitute the right, and nobody should obtain more than is necessary. Frugality practised at home will ensure a sufficient supply for all, despite any effort of the enemy.

There were now official recommendations for consumption. Each person was asked to limit their purchase of three staple foods to prescribed amounts: 2½lb of meat, ¾lb of sugar and 4lb of bread, per head per week.

These were only suggested amounts, however. Captain Bathurst, Devonport’s parliamentary secretary, pointed out that the ration was only ‘intended to be an average and it is left to the general public to observe the average in the spirit of the appeal’. George V and the royal family announced they would be adhering to these restrictions and a royal proclamation was issued. Householders were encouraged to sign this King’s Pledge and in return they were promised a metal ‘ration badge’, which could be worn on the lapel as a public display of their patriotism. The pledge scheme proved so popular that there were not enough badges and a purple ribbon pin was issued instead.

No doubt those who signed up to the pledge had some intention of adhering to it but ultimately Devonport’s voluntary rationing programme did little but put off the introduction of compulsory rationing for another year. It was only with reluctance that Devonport proposed an outline scheme for rationing but by that stage the public and the government had lost confidence in his ability to manage the situation and he resigned in May 1917. His successor, Lord Rhonnda, persisted with voluntary rationing until February 1918, when bread, butter, meat and sugar consumption were controlled. Appealing to patriotism could only go so far – as ‘A Little Bird’ joked in the magazine Woman’s Life: ‘Have you heard the best method for testing one’s patriotism? It is this: get yourself weighed: if you are steadily losing, you can indeed claim to be a true patriot.’

Jennifer Doyle has recently completed her PhD on women’s periodicals and food in the First World War at the Institute of Contemporary British History, King’s College, London