Louis Braille and the Night Writer

Louis Braille’s tactile reading system made literacy for the blind a reality, but he was indebted to an officer in Napoleon’s army. 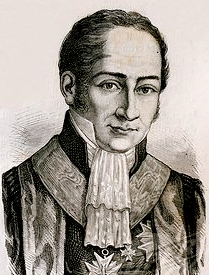 As a boy in military school, Charles Barbier de La Serre (1767-1841) was taught that war was a noble profession in which victories are won by intelligence and valour. As a man, he would come to learn how savage the war could be.

Barbier served as an artillery officer in his one-time classmate Napoléon Bonaparte’s army. Stationed on the front line, he witnessed firsthand war’s capacity to kill and maim. Besides those who were slain on the battlefield by day, many soldiers – including his fellow officers – were killed in the dead of night when the light they used to read maps or orders fatally illuminated them for waiting enemy snipers.

Yet years earlier, Barbier had attended a lecture on the Greek historian Polybius and the system – known as the Polybius’ Square – of transmitting messages across great distances with the aid of torches.

The invention relied on a grid pattern with five vertical columns and five horizontal rows. A different letter of the 24-letter Greek alphabet was inscribed in each of the 25 squares (with the last square left blank). Each letter could therefore be identified by the column and row where its square was located. If two individuals possessed copies of the same grid, they could communicate with each other by spelling out their messages one letter at a time through the use of numerical coordinates.

The system Polybius described involved the use of two separate sets of torches. The sender would first raise the number of his torches that represented the horizontal row (from one to five). Next, he would raise the number of torches (again from one to five) that signified the number of the vertical column. Thus, if the letter ‘B’ was in first row, second column, the sender would raise one torch, followed by two torches. With appropriate pauses, the sender could spell out their message. For security, multiple versions of the same grid could be employed with different arrangements of letters, with the sender first signaling the number of the grid that should be used.

The issue for Barbier was how such a system could be adapted to conditions of total darkness. His solution was to transmit messages that could be read by touch. Both sender and receiver would memorise an alphabetic grid and then send messages to each other on pieces of paper that were impressed with patterns of raised dots, with each tactile pattern signifying a letter. 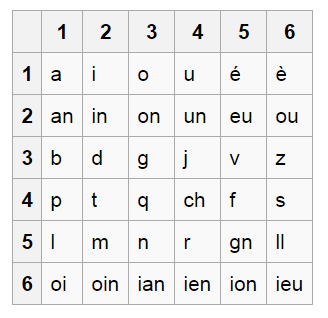 The message would be decoded by a system Barbier called sonography. The sharp point of a pocketknife could be used to cut rough markings into paper, in accordance with two columns, indicating the placement of the letter in the grid. Because of the large number of cells in his system, the letters located in the cells with the highest coordinates (six by six, for example) could contain as many as twelve dots. 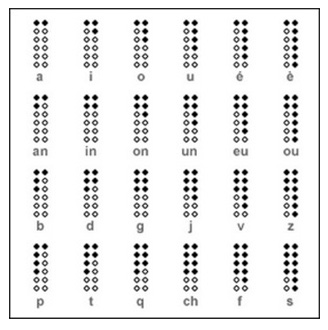 Due to the complexity of the system, Barbier’s superiors regarded his invention as too impractical for use by soldiers in the field.

After being rebuffed, Barbier does not seem to have considered adapting his system of night-writing to non-military use by the blind, but its value could not have escaped him. Whether from the explosion of gunpowder or the traumatic impact of projectiles and shrapnel, blindness was a common consequence of battle, especially with Napoleon’s emphasis on artillery. Though we do not have statistics from the Napoleonic Wars in which Barbier fought, statistics from the American Civil War suggest how devastatingly common eye injuries were. According to records published in 1870 by the Surgeon General of the US Army, 10.77% of gunshot wounds suffered by Union soldiers were to the head and neck. Of these injuries, 51% resulted in blindness to one or both eyes.

An even more prevalent cause of blindness was trachoma. Tens of thousands of British and French soldiers contracted this then-incurable disease while fighting in Egypt between 1798 and 1801, and it spread rapidly upon their return to Europe because of crowding and lack of sanitation in their barracks. In Paris, the Hôtel des Invalides had originally been built in the late 17th century to house 5,000 veterans, but the number of blind could not have been that great since only two or three dining-hall tables were specifically reserved for their use, sadly to prevent sighted soldiers from stealing their rations. Far more blinded veterans were compelled to struggle for existence in cities and villages with or without the help of their families.

Barbier must have concluded that, if his system of night-writing could not help the army in the field, perhaps it could help civilians. Training large numbers of people in its use, however, would require a school-like setting to facilitate instruction and encourage regular practice. For that reason he turned, in 1821, to the Royal Institute for Blind Youths in Paris, the first school of its kind for blind children in the world. By this time, Barbier had perfected his system: no longer using a pocket knife to cut rough markings into paper as he had first done in the field, he now employed the blunt-tip of a stylus to punch out regular dots and later, with the help of a machinist, designed a metal guide-plate to make printing easier.

Until that time, the only system employed to teach blind young people to read was one developed by Valentin Hauy (1745-1822), the founder of the Royal Institute. Hauy’s system impressed the shapes of typographic characters onto wet paper, producing letters embossed in high relief that could be felt with the fingers and identified. Because of the large size of the letters, the books that contained the pages were cumbersome and heavy and could only hold a limited number of words. Nor could students reproduce the letters themselves if they wanted to write.

Barbier’s system, too, had limitations. Because the grid was purely phonetic, it omitted a letters and thus prevented the precise spelling of words. It also lacked punctuation, or symbols that could represent mathematical or musical notation. Most importantly, the size of the cells and the multiplicity of internal dots that had to be identified made reading a laborious process. 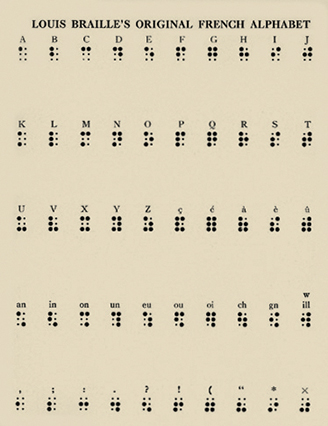 Fortunately, a 12-year-old blind student who attended Barbier’s introductory lecture was able to simplify Barbier’s system by radically reducing the number of dots to a tiny cell measuring just three dots high by two across, creatively arranged in such a way that every letter of the alphabet and every necessary symbol could be faithfully reproduced by hand and speedily identified by touch.

The young student’s name was Louis Braille, and though his name would forever be linked to the tactile writing system for the blind, throughout his life he would always express his indebtedness to the inventive soldier known as the night-writer.

Stephen Bertman is Professor Emeritus of Languages, Literatures, and Cultures at University of Windsor, Ontario.