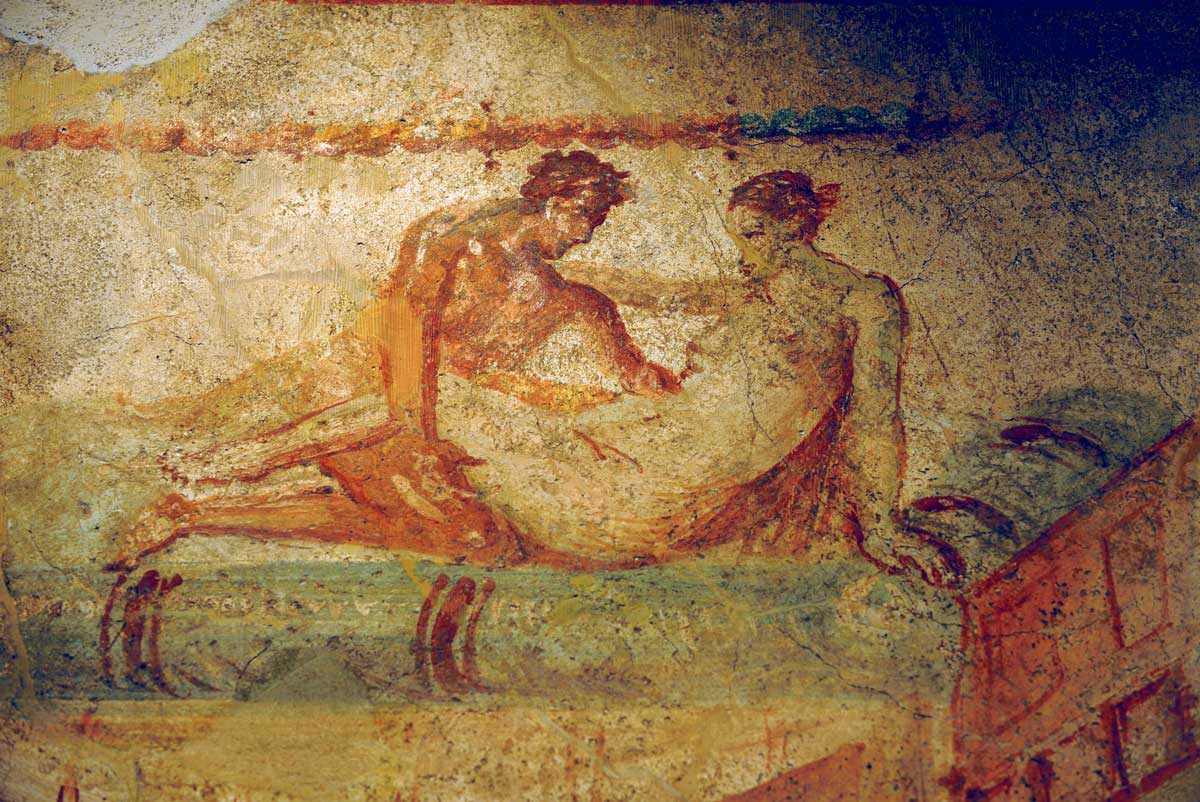 As countries around the world grapple with whether to make prostitution legal, what – if anything – can we learn from the legalised brothels of ancient Pompeii? Sarah Levin-Richardson’s new book addresses the economic, social and legal complexities involved in ancient sex work. The book is the first to address systematically our only surviving ‘purpose-built’ Roman brothel, which was sealed by the eruption of Mount Vesuvius in AD 79.

In 1862, archaeologists began to excavate the two-story brothel, which sits between the forum of Pompeii and its main North-South business district. It catered to Roman men who bought sexual services from both male and female prostitutes. Just five years after its initial excavation, Mark Twain would visit the structure and remark on the fact that female tourists at the time were kept from entering it due to the rather racy wall paintings. Although Twain bashfully remarked that ‘no pen could have the hardihood to describe’ these frescos, this richly illustrated volume provides many of them in full frontal colour, accompanied by thoughtful analysis which questions the seemingly straightforward nature of these paintings and the people within them.

The obscene and often witty Latin graffiti interwoven into painted sexual narratives and scrawled along the hallways of the brothel captured Twain’s imagination and continue to reveal the lives of those who visited or worked in the space today. Since the renovated brothel reopened to the public in 2006, thousands of men – and now women – per day have visited a space where sexual and emotional labour were sold, paid for and even taxed. Levin-Richardson covers the archaeological remains of the brothel and reconstructs the poignant but ephemeral physical and emotional experiences that happened in and around it. Just as the ancient graffiti of the brothel arrested Twain, readers will be drawn in by the hundreds of translated graffiti and inscriptions compiled in this book, scribblings which range from men crowing about sexual conquests (‘Murtis, you suck well’) to the names of employed prostitutes (‘Hey, mistress Fabia!’). An appendix presents the evidence, but it is Levin-Richardson who deftly describes how they together reveal a hierarchy of male competition.

The brothel’s graffiti often conjure an amusing atmosphere, but Levin-Richardson is quick to remind readers of the harsh realities of chattel slavery and human trafficking. Enslaved men and women most often staffed ancient brothels. They sold physical services such as penetrative sex or shaving their clients, while at the same time being expected to provide emotional services to clients through small talk or writing flattering boasts about them. Like all enslaved persons, their bodies were also vulnerable to sexual assault, rape, beatings and even torture.

Whether licit or illicit, sex work has always exposed prostitutes to abuse from pimps, johns and the public. In addition to physical vulnerability, sex workers in ancient Roman society bore a social and legal stigma of infamy. The clients who visited them did not. The issue of shame – who gives and who receives it – infuses the book.

As the book reveals, sex workers and brothels, ancient and modern, cannot be reduced to simplistic archetypes. Sex workers do not have to be cast as either victims or empowered agents, but can be allowed nuanced identities that incorporate both. Reconstructing both the environments of the ancient brothel means that modern audiences can begin to understand its uniquely central and yet marginal position within the ancient city – an existence similar to the workers employed within it.

The Brothel of Pompeii: Sex, Class, and Gender at the Margins of Roman Society
Sarah Levin-Richardson
Cambridge
266pp £30

Sarah E. Bond is Associate Professor of History and Classics at the University of Iowa.