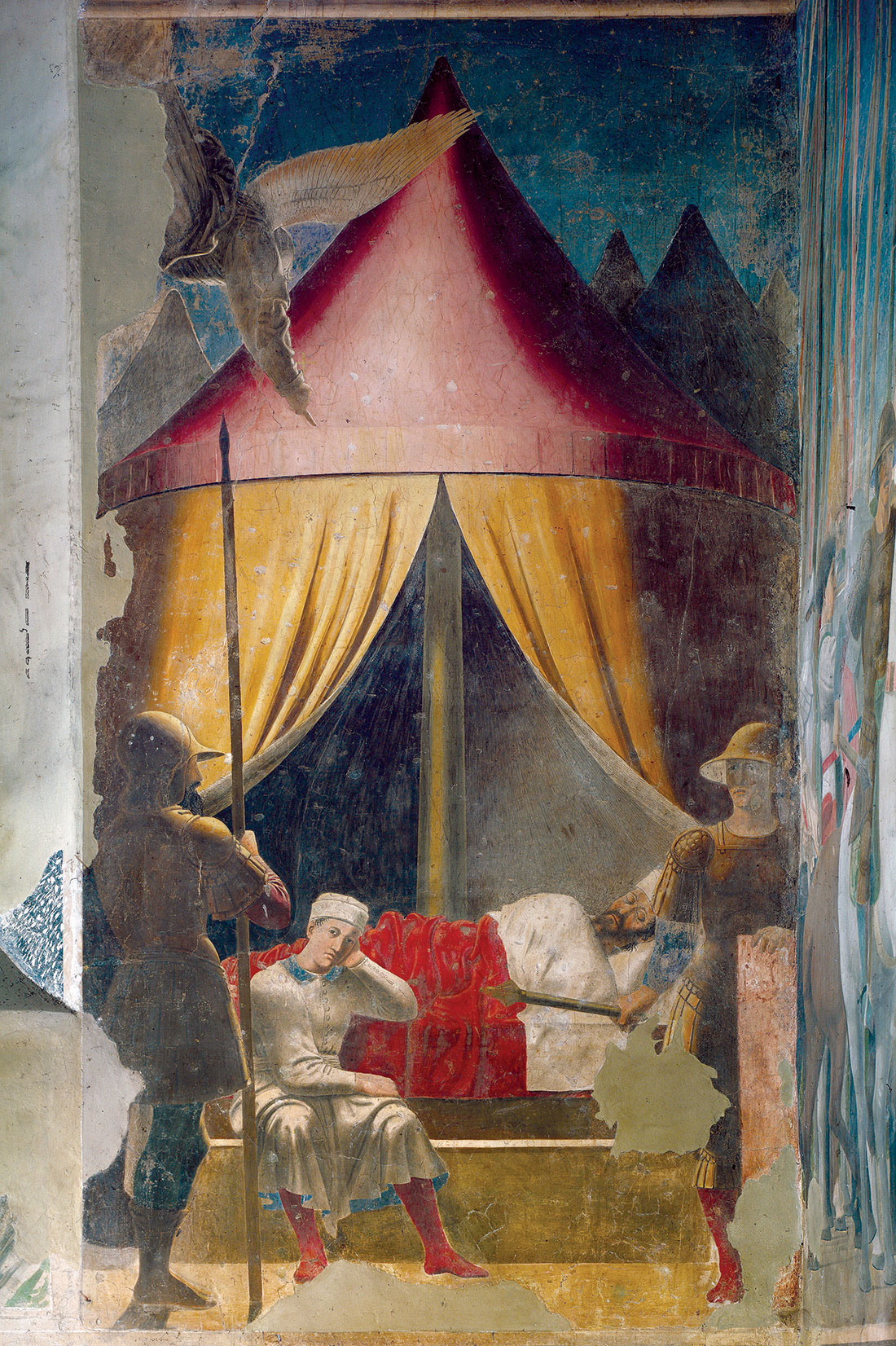 On the eve of his battle with Maxentius to decide who was to be the undisputed Emperor of Rome, Constantine lies asleep in his tent. An angel descends from the night sky, holding a glowing golden crucifix. One of Constantine’s guards, on the left of the painting, echoes the cross with his lance. A bored attendant, oblivious to a vision visible only to his sleeping master, rests his elbow on the bed.

Following the abdication of the Emperor Diocletian in AD 305, a number of emperors and deputy emperors in the West and the East of the Empire contended for power. Acclaimed as emperor by his troops in York in 306, Flavius Galerius Constantinus was appointed deputy emperor of the West by Galerius, Diocletian’s successor. But, while Constantine was away in Britain and Gaul, his brother-in-law, Maxentius, waged war against Galerius and seized Italy and Rome. After Galerius died in 311, Constantine invaded Italy, won battles at Turin and Verona and headed for Rome.

On the morning of 28 October 312, the forces of Constantine and Maxentius would face each other on the Milvian Bridge, which carried the Via Flaminia over the River Tiber into Rome. Constantine would emerge the victor and, by 324, establish himself as the sole ruler of the Western Empire. As Constantine the Great, he recalled his vision on the night before the battle and remembered that he and his troops had seen a cross of light in the sky bearing the command ‘In this sign, you will conquer’. And so, this former devotee of the sun god, Sol Invictus, attributed his victory to the God of the Christians, a religious sect that had suffered appalling persecution at the hands of many of Constantine’s predecessors. In adopting Christianity, he gave it the legitimacy that would see it acquire the status of Rome’s state religion and change the course of Roman and European history and, consequently, that of the world.

‘Constantine’s Dream’, by the 15th-century Renaissance artist Piero della Francesca, is part of his fresco cycle, the History of the True Cross, in the Basilica di San Francesco in the Tuscan city of Arezzo. The story was of particular appeal to the Franciscan order because its founder, St Francis, had similar visions to those of Constantine.

Though Constantine’s conversion is recounted by Eusebius and Lactantius, Francesca appears to have taken his version from that of the Golden Legend, Jacobus da Varagine’s 13th-century collection of hagiographies.