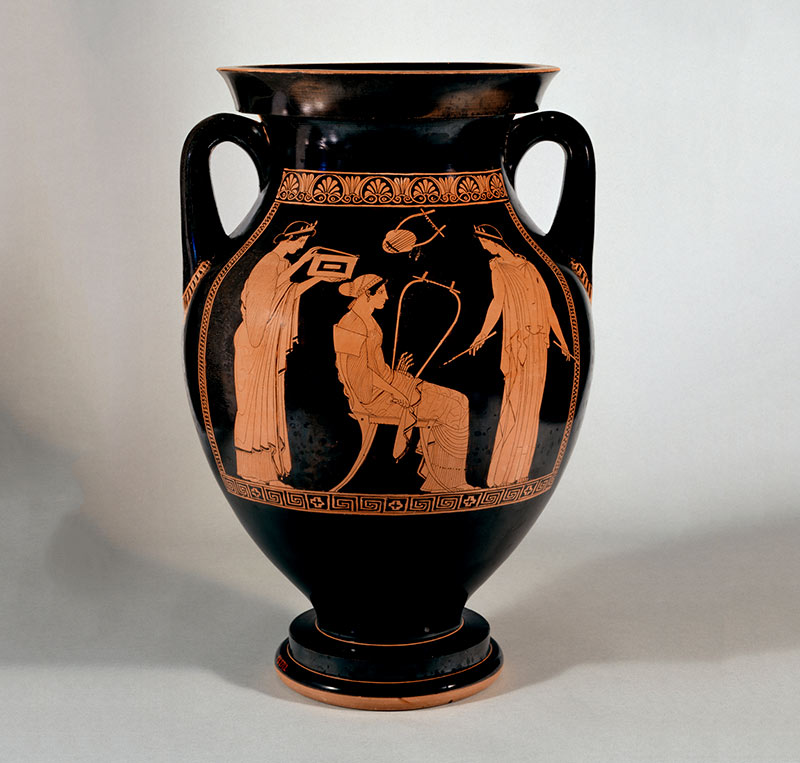 At the beginning of Homer’s Iliad, the Greeks besieging Troy are struck down with a plague in punishment for Agamemnon’s stubborn refusal to return Chryseis to her father, a local priest of Apollo. After nine days, so many have died that Achilles, the leader of the Myrmidons, summons the army to an assembly and the prophet Calchas warns that, unless the girl is handed over, disaster will surely follow. Reluctantly, Agamemnon agrees to back down; and as soon as Chryseis is released, her father duly asks Apollo to end the Greeks’ suffering. Sacrifices are offered and the Greeks sit down to a celebratory meal. Once they have all eaten their fill, they then fill their cups with wine, and, after the customary libations, give themselves over to music:

All day long they sought the favour of the god in dance and song, the young Achaean men beautifully singing a hymn of praise [paean], celebrating the god who works from afar; and the god rejoiced in his heart as he listened.

It is a telling scene. As Homer’s account suggests, music was part of the fabric of life in ancient Greece. No meal was complete without singing, particularly if it ws an all-male affair; and – in much the same way – no trip to the theatre was complete without hearing a few tunes. Songs were sung at weddings and funerals, at home and in public. They were composed to commemorate victory in battle; to remember losses at sea; to celebrate athletic achievement; to arouse desire, to ease pain and to evoke pity. Most importantly, they were integral to worship. Long regarded as a gift from the gods, song was the preferred medium for prayer and invocation and was at the heart of ritual activities.

Yet Homer’s description of the Achaeans’ song is also reflective of the Greek fascination with music in that it, too, was meant to be sung. Although today, we have become accustomed to separating poetry from song (so much so that, when Bob Dylan was awarded the Nobel Prize in 2016, many critics queried whether his ballads really counted as ‘literature’), the Greeks saw little, if any, distinction between the two. Songs were, by definition, works of poetry; and, as the opening line of the Iliad testifies (‘Sing, O goddess …’), the vast majority of Greek poetry was meant to be sung, usually with instrumental accompaniment. Though now encountered mostly in dusty books, Hesiod’s epic genealogy of the gods, Sappho’s erotic verses, Alcaeus’ lyrics, Pindar’s odes, even some portions of Euripides’ plays, were all conceived with lively, musical performances in mind.

A great deal is known about Greek instruments. Some archaeological remains have been found, mostly of pipes, and occasionally even of lyres. But by far the most abundant sources of information are vase paintings – especially the magnificent red-and-black figure works produced in Athens in the fifth and sixth centuries BC. Not only do these show many of the more complicated instruments in exquisite detail (such as the kithara, a stringed instrument similar to a lyre), but they also give some sense of the contexts and combinations in which they were played. On a red-figured amphora attributed to the Niobid painter, for example, three finely dressed women are shown preparing to play together in a rite of the Dionysian cult. A seated woman fingers a barbiton (a large stringed instrument), while one of her companions holds an aulos (a double pipe). The other lifts the lid of a box, perhaps containing crotales (small cymbals or castanets).

Thanks to the survival of several musical treatises – such as the anonymous Division of the Canon, Nicomachus of Gerasa’s Manual of Harmonics, Theon of Smyrna’s On Mathematics Useful for the Understanding of Plato and Claudius Ptolemy’s Harmonics – we also know how these instruments were tuned, as well as something about the notions of melody and harmony that governed their use. Although the Greeks had no grasp of absolute pitch, they had a sophisticated understanding of intervals. As Pythagoras discovered, the size of an interval could be expressed as a numerical ratio. Thus, an octave (diapason) was 2:1; a perfect fourth (diatessaron) was 2:3; a perfect fifth (diapente) 3:2. There was also a rather exotic interval in the ratio 9:8 called an epogdoon, which described the interval between a diatessaron and a diapente, and which today we might call a major second.

Beginning in the fourth century BC, the Greeks even developed their own system of musical notation or, more accurately, a pair of complementary systems, one for voices and the other for instruments. As Alypius of Alexandria explained at considerable length in his Introduction to Music (c. AD 360), these consisted of letter-like shapes that could be placed above the vowels in the lyrics to indicate what sort of tone should be played or sung. Thus, in the system of vocal notation, ‘Z’ was a perfect fourth above ‘O’.

Amazingly, a few ‘scores’ have even survived. A group of four poems attributed to Mesomedes of Crete (second century AD), complete with melodic notation, was passed down through the medieval manuscript tradition and was published by Vincenzo Galilei – father of Galileo – in Florence in 1581. In 1840 these were joined by a selection of tunes found by the German philologist Johann Friedrich Bellermann; and in 1883 Sir William Ramsey discovered the so-called Seikilos Epitaph at Tralleis in western Turkey. Inscribed on a tombstone (stele), this is a rather delightful song, which is still the oldest complete piece of music in the world:

As long as you live, shine
Have no grief at all
Life is but brief
And time demands its end.

Eight years later, a fragment of papyrus with a few lines of sung music from Euripides’ Orestes turned up in the desert. A short time later, two paeans from Delphi were found inscribed on a tablet. Since then, no new inscriptions have been found; but the Egyptian sands have offered up a steady stream of similar remains.

In total, fewer than a hundred such finds have been made, but this has been enough for the Oxford classicist Armand d’Angour to begin reconstructing how much of Greek poetry might have been sung. As d’Angour has recently noted, the surviving evidence reveals that there was often a close correspondence between music and text. Not only was Ancient Greek a deeply rhythmical language, in which syllables could be long or short, but it was also a fundamentally tonal language, in which a rising or falling pitch was attached to different sounds; and it appears that, in Greek songs, the melody tended to follow the rhythm and pitch of the words. There are, of course, some exceptions to the rule. The earliest datable example – the fragment of Euripides’ Orestes – appears deliberately to break with convention. By and large, however, the link seems to hold. Coupled with what is known of instrumentation, rhythm and harmony, d’Angour has used it to produce some brilliantly convincing settings – many of which have even been performed in concert.

The results are breath-taking. The songs that d’Angour has pieced back together do not sound at all like modern, or even medieval, Western European music. Instead, they seem reminiscent of eastern melodies, especially traditional Arabic music. Although there is a relatively limited tonal range and frequent repetition, they make use of strong, often impatient, rhythms and striking dissonances. Accentuated by the unsettling drone of the aulos and the hypnotic lilt of the lyre, the rather declamatory manner of singing creates an atmosphere that is sometimes haunting, sometimes frightening, but somehow always numinous, as if worldly concerns have been left far behind and the heavens are almost within reach. It is perhaps no surprise that, in Homer’s account, Apollo was pleased by the Achaeans’ song. Listening to ancient Greek music played for the first time in almost 2,000 years, one feels as if the divine is truly at hand.