The French emperor was a hero to the composer, inspiring a revolutionary symphony. But disillusionment was soon to follow. 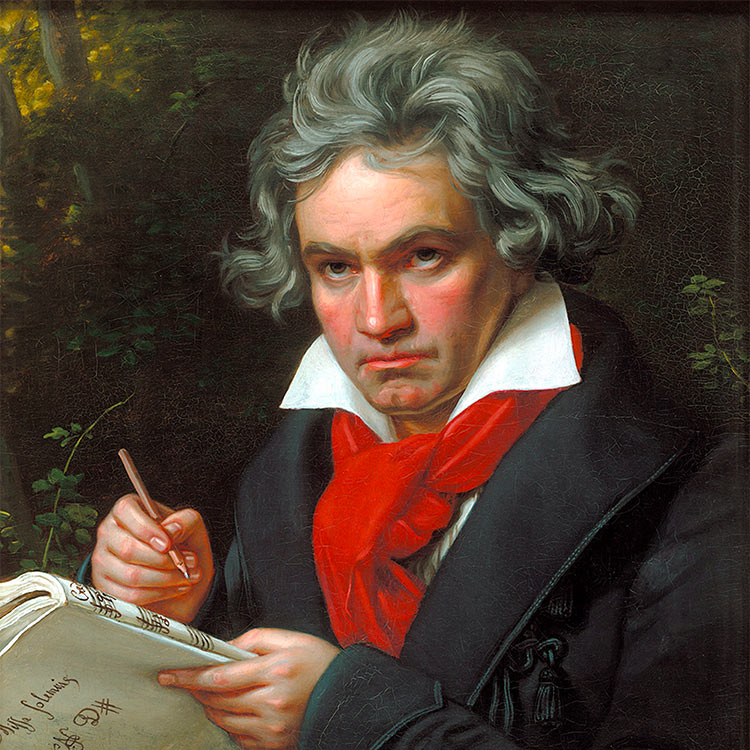 In April 1802, Ludwig van Beethoven left Vienna for Heiligenstadt, a village about five miles to the north. In the preceding weeks he had been deeply depressed by the realisation that he was going deaf; but there, surrounded by nature, he recovered his spirits and found a new sense of musical purpose. Wandering through the countryside, sketchbook in hand, he began toying with a theme in E flat major. Before long, he had the outlines of a completely new symphony – his third – clear in his mind. Though inspired by some of his earlier works, especially the so-called Eroica Variations (Op. 35), it was unlike anything he had written before. Vast in scope and strikingly original in style, it was bold, daring, even triumphalist.

While Beethoven was labouring over the score, he decided to name the symphony after Napoleon Bonaparte, then First Consul of France. Where this idea came from is unclear. According to his biographer and sometime secretary Anton Schindler, it had first been suggested by Jean-Baptiste Bernadotte, the French ambassador to Austria. But, according to Beethoven’s pupil Ferdinand Ries, the idea was the composer’s own. As Ries explained, Beethoven had the ‘highest esteem’ for Napoleon and ‘compared him to the greatest consuls of ancient Rome’. Whatever the case, Beethoven’s enthusiasm for Bonaparte was unflinching. As soon as the score was finished, in early 1804, he wrote the Italian words ‘Sinfonia intitolata Bonaparte’ (‘Symphony entitled Bonaparte’) on the cover and left the manuscript on a table so that all his friends could see.

But Beethoven was in for a nasty surprise. Not long after putting the final touches to his symphony, Ries came to him with news that, on 18 May 1804, Napoleon had declared himself Emperor of France. Beethoven was furious. Flying into a rage, the composer shouted: ‘So he is no more than a common mortal! Now he, too, will tread underfoot all the rights of man [and] indulge only his ambition; now he will think himself superior to all men [and] become a tyrant!’ Snatching up a pen, Beethoven then strode over to the score and scribbled out the title so violently that he tore through the paper. Thenceforth, the work would be known simply as the Sinfonia Eroica (the ‘Heroic’ Symphony).

This episode has become the stuff of legend, giving rise to an abiding image of Beethoven as a lover of liberty, an admirer of the French Revolution and – above all – a republican. Thanks to Schindler and Ries, it is often thought that, having once admired Napoleon as the apotheosis of revolutionary principles, the composer, true to his republican beliefs, later reviled him for sacrificing them to his own ambition and, after removing the Third Symphony’s original title, held the name ‘Bonaparte’ in contempt ever after.

But it would be dangerous to accept this unquestioningly. Although Beethoven’s violent erasure of the original title can still be seen on the manuscript cover, the accounts given by Schindler and Ries are less reliable than they first appear. Schindler’s version is particularly suspect. His claim that the idea of naming the symphony after Napoleon had been suggested by Bernadotte is demonstrably false. Though Bernadotte had indeed served as the French ambassador to Austria, he had quit his post in disgrace in 1798 and had not been back since. Schindler was, moreover, a known democrat, and – having destroyed or doctored many of Beethoven’s papers after the composer’s death – may well have twisted his tale to make it seem as if Beethoven’s views accorded more with his own.

On closer examination, Beethoven’s relationship with Napoleon appears to have been more subtle than Schindler and Ries suggested. As a young man, he was, admittedly, attracted by the ideals of the French Revolution. At the age of 19, he subscribed to a book of Jacobin poetry by Eulogius Schneider and, in the years that followed, peppered his writings with revolutionary sentiments. In a letter to Nikolaus Simrock on 2 August 1792, for example, he declared himself to be a democrat and vigorously objected to being called a ‘gentleman’. Similarly, he often expressed his disdain for organised religion and rarely missed an opportunity to mock the superstitious nonsense peddled by ‘parsons’.

When Beethoven moved to Vienna to study with Haydn, he carried these views with him. On 22 May 1793 he wrote in his Albumblatt that he still loved liberty above all things; and in a letter to his ‘Immortal Beloved’ on 6 July 1801/2, he admitted that the ‘[h]umiliation of man before man pains me’. As he began to forge a career as a composer in his own right, however, his democratic fervour started to abate. Welcomed into the salons of the Viennese nobility, he adapted himself to the tastes of his patrons. He put on aristocratic airs, claimed descent from an old baronial family and – for a time – even adopted the nobiliary particle ‘von’. He also became more conservative in his outlook. Though he remained a passionate defender of liberty and of secularism, he now came to believe that the French Revolution may have gone too far. Like so many of his noble friends, he looked back on the Reign of Terror with horror. He was still not a monarchist; but he was no longer a militant republican either.

It was thus that Beethoven came to admire Napoleon. He was under no illusions; he knew perfectly well that, as First Consul, Napoleon was already trampling on revolutionary principles and he was still enough of a Romantic idealist to grumble about it. On 8 April 1802, for example, Beethoven wrote to his publisher, Franz Anton Hofmeister, to express his disappointment that Napoleon had concluded a concordat with the pope and thereby shattered his hopes for the separation of Church and state. But Beethoven nevertheless saw Napoleon as a necessary corrective for the excesses of the Revolution. In keeping with his new-found conservatism, he lavished praise on the Consul for producing political order out of chaos and for safeguarding the people from themselves. It was for this reason – rather than that given by Schindler and Ries – that Beethoven had Napoleon in mind when he was writing his Third Symphony.

This is not to say that Beethoven would have welcomed the news that Napoleon had declared himself emperor. Although he did not regard monarchy as incompatible with liberty or justice – as his opera Fidelio (1804-14) reveals – he would have been shocked by the former Consul’s contempt for the Constitution of Year VIII and the will of the French people. But it is doubtful whether this alone would have persuaded him to scratch out the title, least of all in the violent manner described by Schindler and Ries. Far more likely, he removed Napoleon’s name so as not to lose the patronage of a noble who had been scandalised by the Frenchman’s actions. Although it is impossible to be certain, this is at least suggested by the fact that, after erasing the original title, Beethoven dedicated the Eroica to Prince Joseph von Lobkowicz, who had given him 400 ducats for the rights to the music and who later became one of his most ardent supporters.

Certainly, Beethoven was not so horrified by Napoleon that he turned his back on the emperor or his family in years that followed. Though the composer’s letters are littered with praise of liberty, they also contain passages celebrating Napoleon’s achievements; and Beethoven was regarded as enough of a friend to the imperial family that, in 1808, Napoleon’s brother, Jerome Bonaparte, then king of Westphalia, even offered him a position as Kappelmeister at his court in Kassel.

It was only after Napoleon crushed Austria in the War of the Fifth Coalition (1809) that Beethoven’s enthusiasm began to cool noticeably. Shaken by the French bombardment of Vienna and fearful of being professionally compromised by his association with the Bonapartes, he felt obliged to repudiate Napoleon for the first time. There was no looking back. As the emperor ranged across Europe, it became difficult for Beethoven to regard him with anything but contempt. No friend to liberty or to order, he was now little more than a conqueror. Though Austria was forced to ally with France for a time, opinion in Vienna remained firmly against him.

Napoleon’s defeat in the Peninsular War set the seal on the composer’s change of heart. Shortly before the emperor sailed away into exile on Elba, Beethoven – who now identified liberty with Germanic patriotism – professed himself to be on the side of the allies and even penned a short orchestral work in celebration of Wellington’s victory at the Battle of Vitoria. The breach was complete.

It was perhaps inevitable; but it is still tinged with sadness. When the soaring melodies of the Sinfonia Eroica are compared with the eccentric blasts of Wellingtons Sieg oder die Schlact bei Vittoria, it is hard to escape the feeling that Beethoven’s music was more exciting when he was for Napoleon, rather than against him.