As the sounds of the world rattled into the future, so, too, did art and music. 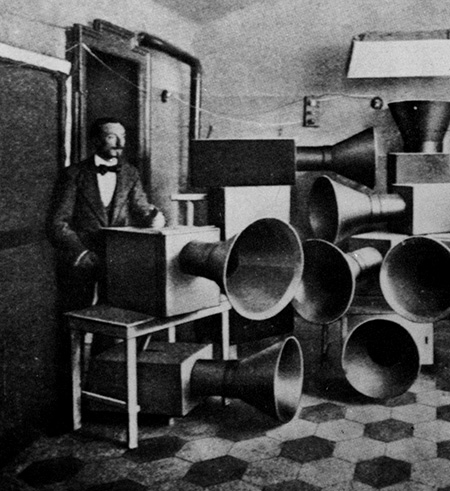 In the early years of the 20th century, Milan was in thrall to Futurism. Founded by Filippo Tommaso Marinetti in 1909, the Futurist movement sought to liberate Italian art from the ‘tyranny’ of the past. Consciously rejecting everything old – especially the static formalism and derivative sentimentality that typified ‘good taste’ – it exalted in the modern world, machinery, speed and violence. It glorified war, militarism, patriotism, ‘the destructive gesture of the anarchists, the beautiful ideas that kill’. It called for the destruction of ‘museums and libraries … morality … and all opportunist and utilitarian cowardice’. And most of all, it celebrated ‘roaring motor car[s]’, ‘the gliding flight of aeroplanes’, ‘factories suspended from the clouds by the thread of their smoke’ – anything, in fact, that displayed the technological triumph of man over nature.

Among the early members of the Futurist movement was a young artist called Luigi Russolo (1885-1947). Born in the little town of Portogruaro, not far from Venice, he had come to Milan to study at the Accademia di Belle Arti di Brera while still in his teens. He was, admittedly, not the most talented of students, as some of his early paintings testify; but he nevertheless showed enough promise to be invited to help with the restoration of Leonardo da Vinci’s Last Supper and to attract the attention of other Futurists-to-be, including Carlo Carrà, Giacomo Balla, Gino Severini and Umberto Boccioni, who were to become his lifelong friends and collaborators. Restless and excitable, they wanted to break free of artistic convention; and, after being introduced to Marinetti in early 1910, they embraced his vision of Futurism. Only weeks later, Boccioni penned his own Manifesto of Futurist Painters and Russolo added his signature, along with the others.

Over the next few years, this group of friends took the world by storm. Though they were slow to develop a coherent style, they chose deliberately unfamiliar or provocative subjects and used elements of Cubism and Divisionism to imbue their works with an unparalleled sense of energy and dynamism. Soon, crowds were clamouring to get into their exhibitions; critics were lavishing them with praise; and collectors were willing to pay any price for one of their paintings – especially if it was as striking as Boccioni’s La città che sale (1910).

But for Russolo, this was just the beginning. He soon began to wonder if Futurism could be applied to music just as easily as to the visual arts. Why should music not be brought into the modern age, too? Surely the time had come to break with the formalistic structures of the past and strike out in a more modern, technological direction?

In 1913 Russolo wrote a long letter to his friend, the composer Francesco Balilla Pratella, explaining his thoughts on the subject. Later published in book form as L’arte dei rumori (‘The Art of Noises’), this began with a survey of musical history that rested on the distinction between noise and sound.

In the ancient past, Russolo argued, ‘life went by in silence or at most in muted tones’. With the exception of such rare and unusual phenomenon as earthquakes, avalanches and waterfalls, he claimed, nature was quiet. When, amid this dearth of noise, man drew the first sounds from ‘a pierced reed or a stretched string’, he therefore regarded them as something strange and extraordinary – more divine than human. As such, sounds were considered sacred and reserved for acts of worship.

These first sounds were, of course, crude and unsystematic. In time, however, the development of more sophisticated instruments led to ideas of harmony and chords. This paved the way for Gregorian chant, Renaissance polyphony, Baroque counterpoint and, eventually, the music of the Romantic age. But throughout, music remained cut off from everyday life. Devoted to the pursuit of ‘purity, limpidity, and sweetness of sound’, it was still ‘a fantastic world superimposed on the real one’.

Since the Industrial Revolution, however, a dramatic change had taken place. The world was no longer silent. In cities, the air was filled with the rumbling of trains, the honking of car horns, the clamour of factories and the constant chatter of a million voices. Even in the countryside, quiet had given way to the lumbering of tractors and the swish of threshing machines. For Russolo, this not only threatened the special status previously claimed for ‘pure sound’, but robbed sound-music of its capacity to arouse feelings of reverence and awe. Indeed, so great was the ‘variety and rivalry of noises’ that sound-music no longer aroused any feelings at all.

Composers were not unaware of this. As far back as the 18th century, they had realised that, if they were going to excite their listeners, they needed to respond effectively to the growing cacophony of ‘noises’. Hoping to make their music more like ‘noise’ than ‘sound’, they had developed more complex forms of polyphony, seeking out ‘the most complicated successions of dissonant chords’. Industry was, however, still in its infancy; and since they had not yet acquainted themselves fully with ‘noise’, they still struggled to tolerate more than a moderate amount of dissonance. Now, things were different. Composers – and listeners – were used to hearing a deafening array of noises every day and had learned to delight in discordance to a far greater degree. They had already begun to be more daring. But the time had come for them to be even more audacious. Russolo called on them to do away with all the compositional norms that they had inherited from previous generations. What was more, he also insisted that they abandon the limited range of instruments of which traditional orchestras were composed. Instead, he invited them to make use of a mechanical ‘Futurist orchestra’, inspired by the ‘confused and irregular’ sounds of daily life. This, he argued, should produce six ‘families of noises’ – from rumbles, roars and explosions, to gurgles, snorts, screeches, shrieks and groans – from which could be created an infinite variety of musical experiences, capable of enriching ‘men with a new and unexpected sensual pleasure’.

Russolo was determined to lead by example. Shortly after penning L’Arte dei rumori, he set himself to designing and building a large number of noise-generating machines called intonarumori. Each of these peculiar-looking devices consisted of a large horn attached to a box containing a complicated collection of metal plates, gears and strings with which it was possible to produce any one of a wide range of bizarre noises. According to how they sounded, these instruments were classified into eight subgroups, including creepers, gurglers, howlers and rumblers.

With this, the rudiments of a ‘Futurist orchestra’, Russolo set about composing some appropriate music and in April 1914 he put on his first concert. Together with Marinetti, he performed four pieces – ‘Battle in the Oasis’, ‘Dining on a Hotel Terrace’, ‘The Awakening of a City’ and ‘Meeting of Cars and Airplanes’. Their titles were, however, deceptively innocuous. Each piece sounded like a decrepit vacuum cleaner being tortured by an unusually malicious guitar. The audience was aghast. They could not believe what they were hearing. But bewilderment quickly turned to anger. A riot broke out and in a matter of moments, Russolo and Marinetti found themselves brawling in the stalls. At a second concert two days later, Russolo ended up punching a critic in the face. Happily, further performances were not quite as heated.

Although Russolo never enjoyed the popular success he had hoped for, and ultimately abandoned music altogether, L’Arte dei rumori was to have a lasting effect. Not only were his intonarumori admired by modernist composers, such as Igor Stravinsky and Maurice Ravel, his notion of ‘noise music’ also inspired a wave of innovation that continues even today. Captivated by his attack on harmony, a young John Cage developed a new theory of indeterminacy in music and began using conventional instruments in unconventional ways to produce intriguing mosaics of noise – and even of silence. More striking still were the French composers Edgar Varèse and Pierre Schaeffer. Inspired by Russolo’s passion for technology, they developed some of the first electronic instruments – and even experimented with rudimentary sampling techniques. This paved the way not only for early pioneers of synth music – such as Josef Tal and Milton Babbit – but also for minimalist composers such as Steve Reich, electronic musicians like Jean-Michel Jarre and electropop groups like Kraftwerk. Indeed, even contemporary electronic acts like Dawn Hunger can trace their lineage back to L’Arte dei rumori.

Painful though Russolo’s intonarumori may have been to hear, he had undoubtedly seen the future. And no self-respecting Futurist could have asked for more.