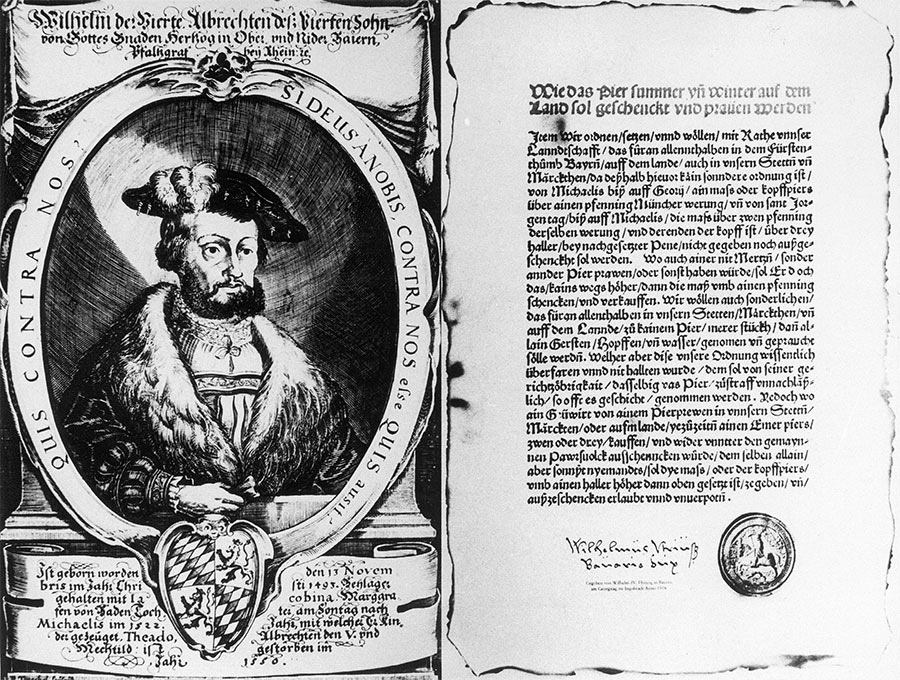 Visitors to Germany soon become aware of the lack of availability of foreign beers. In its very largest cities, one might come across a lonely Guinness tap among the pilsners, helles, weissbiers, kellerbiers and bocks, but Germans are as loyal to their domestic brews as they are to their BMWs, Audis and Mercedes. One of the reasons that Germans drink so little of anyone else’s beer can be traced back to the Reinheitsgebot, usually translated into English as the German Beer Purity Law, which was first adopted in Bavaria, the country’s most prodigious brewing region, in April 1516, according to the wishes of Bavaria’s ruler, Duke Wilhelm IV.

The passing of the Reinheitsgebot was prompted less by a concern for aesthetics and more for the health and wellbeing of the populus. In the Middle Ages and into the early modern period, beer was the staple daily drink, in variable quantities, for men, women and children. Although water was still drunk, it was often easier and safer to drink fermented beer, especially in unhygienic, overcrowded urban centres before the advent of advanced sewage systems. However, it was not beyond unscrupulous brewers to increase prices or add all kinds of unpleasant additions to their concoctions, including hallucinogenic plants. And so the Bavarian authorities insisted that only water, barley and hops could be used to brew beer. Wheat, now widely used in the brewing of Bavarian weissbier, was also prohibited because it might harm bread production, the staple food of medieval Germany.

Some beer lovers have criticised the uncompromising Reinheitsgebot, arguing that it suppresses the kind of innovation that is common to the British and American craft brew industries. The European Union also insists that foreign brewers should have free access to the German market, even when they fall below the rigorous standards of the purity law. Germans, however, remain loyal to their marvellous beers.