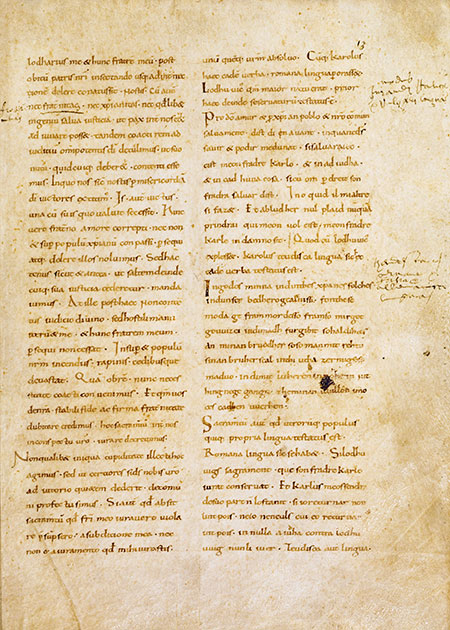 Ordinatio imperii in 817. With this, Lothar, his eldest son, was proclaimed principal heir and overlord of his two younger brothers, Louis ‘the German’ and Pippin: Louis was proclaimed king of Bavaria and Pippin king of Aquitaine. This was intended to preserve the unity of the Frankish Empire, while promoting Louis’ eldest son, Lothar, above his younger brothers. However, the birth of a further son, Charles ‘the Bald’, to his second wife and the ensuing attempts to bestow on him a sub-kingdom of his own, sowed discontent among the brothers.

The 830s were fractious for Louis the Pious. In the early years of that decade came uprisings from his three eldest sons, Lothar, Pippin and Louis. The last of these was successful and he was briefly deposed. By the end of the decade, however, he had regained his position and upon his death in 840 the Empire was inherited by his three surviving sons, Lothar, Louis the German and Charles. Pippin had died in 838 and Charles had received his kingdom, Aquitaine. Despite this, Lothar claimed the entire Empire, which threw the three brothers into civil war.

Charles and Louis aligned to oppose Lothar. They met, with their armies, in February 842 at Strasbourg and swore oaths, both to promise allegiance to each other and to be united against their brother. Proceedings began with speeches outlining Lothar’s many injustices and offences against his brothers. Louis, being the elder, went first:

Let it be known how many times Lothar has – since our father died – attempted to destroy me and this brother of mine, committing massacres in his pursuit of us.

The brothers then swore their oaths in front of their armies and the armies swore pledges to the effect that, if either of the brothers were to break their oath, their soldiers were not to help their lord against the other:

If Louis keeps the oath that he has sworn to his brother Charles, and Charles, my lord, on the other hand breaks it … then I shall not help him in any way against Louis.

The day was recorded by Nithard, a chronicler and another grandson of Charlemagne, who wrote his history, ‘On the Dissensions of the Sons of Louis the Pious’, at the request of Charles the Bald while in his service. It now survives in a manuscript, written in the late tenth century.

The oaths and pledges, notably, were given in the vernacular languages of each of the armies, rather than the kings’ own languages or in Latin: Charles speaks to Louis’ army in Old High German, ‘teudisca lingua’, and they pledge in the same; Louis and Charles’ army speak in Proto-French, ‘romana lingua’. By speaking to their brother’s army in their own language, each oath-taker ensured they were understood and neither could escape being held to their word.

The Oaths are important, not just for the treaty they forged but for the languages they used: in the Carolingian Empire, Latin was the standard language of writing. The Oaths of Strasbourg are the very earliest written evidence of a Romance language to survive and are, therefore, the earliest words to be written in the language that would become French. The Old High German portions are one of the earliest known texts written in that language. Together, they give a glimpse of how multilingual the Carolingian Empire was. Louis and Charles were both multilingual and literate.

Thanks, in part, to the alliance made that day in Strasbourg the war was brought to an end in August 843 with the Treaty of Verdun. With this treaty the Empire was subdivided: Lothar took the central region around Aachen, with lands stretching down to Italy; Louis the German took East Francia, which was, roughly, the territory east of the Rhine; and Charles the Bald took West Francia, the western two thirds of what is now France. This subdivision created geographical regions with their own languages, political organisations and identities, which laid the foundations for the shape of western Europe.