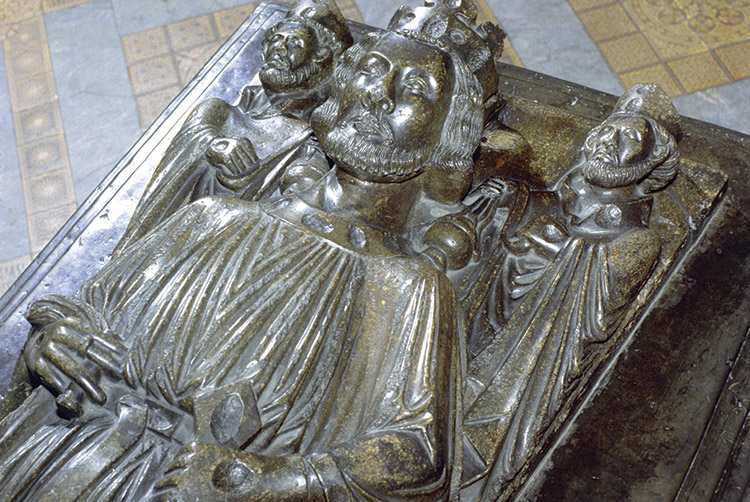 He is famous for his involvement in Magna Carta, for losing the crown jewels in the Wash and as the villain of the Robin Hood legend. History’s verdict on him has been thoroughly negative and no subsequent English monarch has wanted to be called John, but he had his defenders and still has.

John was the youngest of the four legitimate sons of Henry II to survive infancy. Count of Anjou, Duke of Normandy and a grandson of Henry I, Henry II married Eleanor of Aquitaine in 1152, ruled more of France than the French kings and conquered England in 1153, aged 20. He was a vigorous and commanding figure and his sons were hungry for power.

The eldest, the Young Henry, and the next brother, Richard, together rebelled against their father in the 1170s and John became Henry II’s favourite. He had jokingly nicknamed him Lackland, but he made John Lord of Ireland in 1177, aged about ten, and gave him lands in England and France. Young Henry died in 1183 and Richard, the admired warrior ‘Lionheart’, succeeded to the throne on Henry II’s death in 1189. The third brother, Geoffrey, who had been given Brittany, died in 1186 and Richard now recognised Geoffrey’s baby son Arthur as his own heir. John allied himself briefly with Philip Augustus, King of France in 1193 while Richard was away on crusade, but he thought better of it and when Richard died in 1199 John was crowned king in Westminster Abbey, aged 31 or 32.

He soon found himself up against the formidable Philip Augustus, who in 1202 confiscated John’s French possessions and announced that Arthur of Brittany was their rightful lord. John took the 14-year-old Arthur by surprise, captured him and held him prisoner. Arthur vanished from view and it was generally accepted that John had him murdered. In the following years Philip Augustus took over Normandy, Anjou, Poitou and much of Aquitaine, while John’s efforts to fight him off cost a fortune. He raised taxes in England to unprecedented levels and behaved in an increasingly arbitrary way which, along with his failure in France, turned many powerful English barons, the Church and leading financial figures in London and the towns against him. Eventually, after years of what began to approach civil war, in 1215 his opponents forced him to accept Magna Carta, which formally placed limits on royal power for the first time.

John had not the slightest intention of keeping to Magna Carta and his opponents remained justifiably suspicious. Early in 1216 he led his army of expensive mercenaries against the Scots, who had occupied Northumberland, and on into southern Scotland, killing and pillaging as they went. He then went south into East Anglia and attacked the homes and estates of his enemies there, forcing those he defeated to swear an oath to disregard Magna Carta. In May the heir to Philip Augustus, Prince Louis of France, landed in Kent with a sizeable army to back John’s opponents and claim the English throne. He marched on to London, where he was welcomed.

The armed conflict swayed this way and that for months. John was in East Anglia again in October and passed through the town of Bishop’s Lynn (now King’s Lynn) on the south side of the Wash. His baggage train got trapped in quicksands and the incoming tide swept away carts, men and draught animals. Among the possessions lost were things John took with him everywhere, including, according to some chroniclers, sacred relics and other precious treasures. The English crown jewels certainly disappeared at about this time.

John had been suffering from gout since 1215 and was seized by dysentery. He went to Newark Castle in Nottinghamshire and from there, on October 15th, he wrote to Pope Honorius III asking for absolution and hoping for God’s mercy. He died during a fearsome thunderstorm on the night of October 18th and 19th, aged 48 or 49. Some of his few remaining supporters were with him, most notably the highly respected William Marshal, Earl of Pembroke. John’s body was taken for burial in Worcester Cathedral.

William Marshal became regent for John’s nine-year-old eldest son, who was crowned as Henry III in Gloucester Cathedral on October 28th. Marshal reissued Magna Carta in November and it was his skilful handling of the situation and perhaps a feeling of patriotic relief that inspired acceptance of the boy-king. The Peace was signed with Prince Louis in the Treaty of Lambeth in September 1217 and Louis retired to France with a bribe. In England, peace was restored.