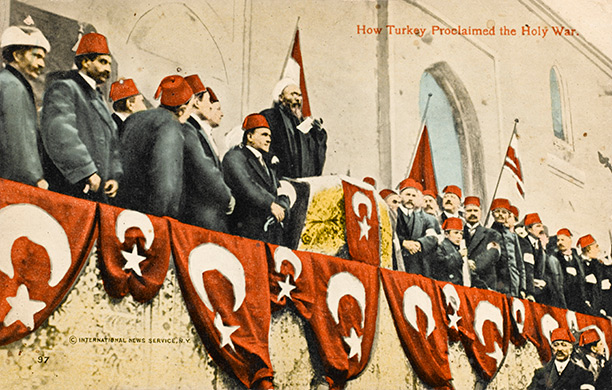 On Wednesday November 11th, 1914, as the Ottoman generals mobilised their troops to fight on the side of the Central Powers, Shaykh al-Islam Ürgüplü Hayri, the highest religious authority of the caliphate in Constantinople, issued five fatwas, calling Muslims across the world for jihad against the Entente and promising them the status of martyr if they fell in battle. Three days later, in the name of Sultan-Caliph Mehmed V, the ‘Commander of the Faithful’, the decree was read out to a large crowd outside Constantinople’s Fatih Mosque. Afterwards, in an officially organised rally, masses with flags and banners moved through the streets of the Ottoman capital, calling for holy war. Across the Ottoman Empire, imams carried the message of jihad to believers in their Friday sermons.