Maximilian of Austria acceded to the imperial throne of Mexico on June 12th, 1864. 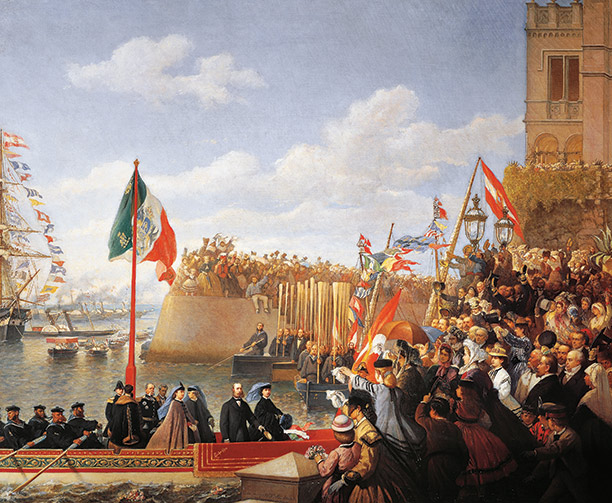 One of the strangest political events of the 19th century was the accession of the Archduke Maximilian of Austria to the new imperial throne of Mexico. The Mexican Empire turned out to be an empty French dream and Maximilian was the wrong man for it in any case. Born in Vienna in April 1832, he was the younger brother of the Habsburg emperor of Austria, Franz Joseph I. It was whispered that he was the offspring of an affair between his mother and Napoleon II of France (Bonaparte’s son), who died in Vienna that same month, but that is not now taken seriously.

Maximilian served in the Austrian navy, married Princess Charlotte of Belgium and seemed destined for a conventional career, but a conspiracy formed between Napoleon III of France and rich upper-crust Mexican landowners determined to be rid of the country’s republican government and the current president, Benito Juarez. The Juarez regime owed huge amounts of money to France and other European countries, which it could not or would not repay, and Napoleon not only wanted the money but cherished grandiose imperial ambitions of
his own.

In an alliance Napoleon organised in 1861, troops from Britain, Spain and France landed at Veracruz in Mexico to demand payment of the government’s debts, but when the British and the Spanish realised that the French meant to conquer Mexico they left. French reinforcements arrived and launched a civil war, which is thought in the end to have cost some 50,000 lives. They drove Juarez and his people out of Mexico City in 1863 and further victories followed.

Napoleon had now selected the Archduke Maximilian as a useful puppet to install on the Mexican throne. The archduke was uncertain at first, but his dynamic and ambitious wife urged him on and he was told that the Mexican people had voted for him in a plebiscite (though the result was in fact extremely dubious). Maximilian and Charlotte, now to be called Carlota, sailed across the Atlantic, reached Veracruz late in May 1864 and went on to be welcomed in Mexico City. He was 31 at this point and she was 23.

The new emperor and his consort settled themselves and their court in Chapultepec Castle on the outskirts of the city, splendidly situated on a hill where the Aztec rulers had long before had a retreat. Architects were called in to rebuild the 18th-century house, furniture and artworks were brought from Europe and a grand straight avenue on the model of the Ringstrasse in Vienna was created to link the palace directly to the centre of the city. It was called Paseo de la Emperatriz (‘the Empress’s Promenade’). It is now the Paseo de la Reforma and the castle is one of the city’s tourist attractions.

Maximilian took a far more progressive line than his backers had expected, which gradually lost him their support. He regarded himself as the protector of the Mexican peasantry, abolished both serfdom and child labour and antagonised the senior Roman Catholic clergy. Not only did he refuse to declare Roman Catholic Christianity the country’s only permitted religion, but he declined to restore the massive church estates that the Juarez regime had confiscated, bring back the Catholic religious orders and have all the schools run by the church.

The French army continued to support Maximilian and by early 1865 it had taken control of much of the country. In April, however, the American Civil War finally came to an end and the United States government now insisted that French occupation of Mexico was contrary to the Monroe Doctrine. It would no longer be tolerated and the French troops must leave the country. The French had no realistic prospect of remaining and Napoleon, who now had problems of his own in Europe, agreed in 1866 to withdraw them. Maximilian fought bravely on for as long as he could, but the tide had turned against him and in May 1867, hopelessly outnumbered and besieged by republican troops who were starving his few remaining men to death, he could hold out no longer. On June 19th, aged 34, he was executed by firing squad at Queretaro, north of Mexico City. His body was returned to Austria for burial.

Carlota had returned to Europe earlier in a desperate attempt to gain support from the French government, the Austrian government and the pope. Her efforts were a total failure and she suffered a psychological collapse and spent the rest of her long life on the wrong side of sanity, apparently afflicted with paranoia. Her Imperial Majesty Empress Carlota of Mexico died of pneumonia in Belgium in 1927 at the age of 86. She was buried at the Belgian royal palace at Laeken, just outside Brussels.