The Spartacist Uprising in Berlin

A power struggle in postwar Germany erupted on January 5th, 1919. 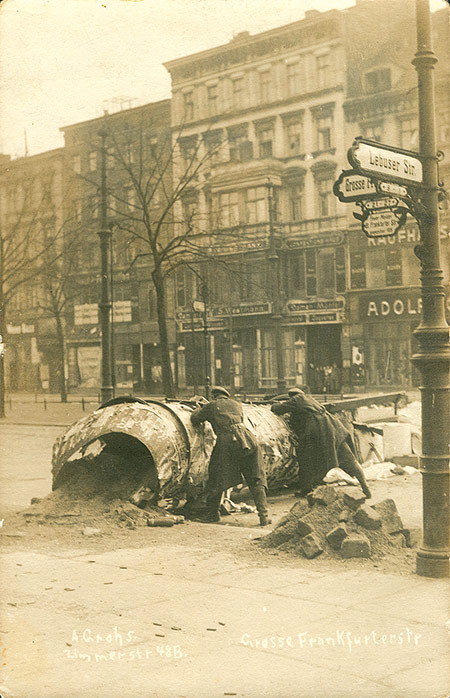 Defeated in the First World War, humiliated, desperately short of food and assailed by the influenza epidemic that swept Europe, Germany was in a critical state. The Kaiser abdicated as emperor and on November 8th, 1918, a socialist republic was reluctantly proclaimed in Berlin by the moderate Social Democrat leader Friedrich Ebert, who confided to a friend that he ‘hated it like sin’, but proceeded to form a government. Meanwhile there had been a naval mutiny at Kiel and the Baltic and North Sea ports were falling under the control of councils of sailors, soldiers and workers on the Russian model.

The situation was to the liking of the Marxist leaders Karl Liebknecht and Rosa Luxemburg, who believed that the revolution in Russia would inevitably spread to Germany and across Europe. Liebknecht, whose ambition was to be the German Lenin, was a left-wing lawyer, who in 1914 had been the only member of the Reichstag to vote against German involvement in the war. At the end of that year, with Rosa Luxemburg and others, he founded what became the Spartacist League, named after the gladiator Spartacus, leader of the slave rebellion that threatened the Roman government in the first century BC. The group’s pamphlets were quickly declared illegal and Liebknecht was sent to the eastern front where he refused to fight and spent his time burying dead soldiers. He was soon allowed back to Berlin, where he was sentenced to prison for treason after a Spartacist demonstration in the city in 1916.

Rosa Luxemburg, the daughter of a Polish Jewish family, was active in Polish left-wing politics from her teens but spent most of her adult life in Germany, where she was imprisoned several times for opposing the war and campaigning for a general strike. In Spartacist publications she called herself Junius, after Lucius Junius Brutus, founder of the Roman Republic around 500 BC. Like Liebknecht, she was sent to prison for treason in 1916. She did not share his approval of the Bolsheviks, but called for a dictatorship of the proletariat. She and Liebknecht were both released from prison in 1918 and started the Red Flag (Rote Fahne) newspaper. At the end of the year a conference of the Spartacist League, socialists and communists founded the Communist Party of Germany, with Liebknecht and Luxemburg as the leaders.

This was almost immediately followed by an uprising in Berlin against Ebert’s regime, with encouragement from Soviet Russia. Luxemburg initially opposed it, but joined in after it began and it was supported by the Red Flag. The Berlin police chief, a radical sympathiser who had just been dismissed, supplied weapons to protesters who erected barricades in the streets and seized the offices of an anti-Spartacist socialist newspaper. Calls for a general strike brought thousands of demonstrators into the centre of the city, but the Revolution Committee, which was supposed to be leading the uprising, could not agree what to do next. Some wanted to continue with the armed insurgency, others started discussions with Ebert. Attempts to get army regiments in Berlin to join the revolt failed.

By January 11th, Liebknecht and Luxemburg had lost all control of events and Liebknecht could only say, fatalistically: ‘Ultimately one should accept history as it develops.’ The attempt at a left-wing revolution was put down by force on Ebert’s orders by the army and the Freikorps volunteer militias, which had been formed from soldiers home from the war and which the army had been quietly training. Equipped with artillery, machine guns and grenades, they retook the police headquarters, the war ministry and other buildings the revolutionaries had captured, and shot hundreds of the demonstrators, including many who surrendered. The government summarily disbanded the workers’ and soldiers’ councils. The outcome showed that there was not remotely the widespread support for communism on which the rebels had relied and elections on January 19 were a triumph for Ebert and the creation of a democratic constitution for the new Weimar Republic.

On January 15th, meanwhile, a Frei-korps unit had seized Liebknecht and Luxemburg in a house where friends were hiding them. They were taken to the Hotel Eden, where Luxemburg’s skull was smashed in with a rifle butt. She was subsequently shot and her body was thrown into the Landwehr Canal. ‘The old slut is swimming now,’ one soldier said.

Liebknecht was also shot and his corpse was taken to a morgue. The official version of their deaths had Liebknecht shot while trying to escape and ‘Red Rosa’ attacked by a mob. Luxemburg’s body was recovered four months later and she and Liebknecht were buried at the Friedrichsfelde cemetery in Berlin. A Freikorps soldier named Otto Runge was sentenced in May to two years in jail for killing Luxemburg. He was afterwards awarded compensation by the Nazis.