Adopting the guise of a man was a path to influence for medieval women. It could be a dangerous one, too. 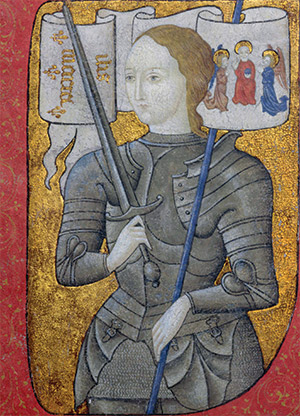 The story of Pope Joan became popular in the 13th century when the Dominican monk Jean de Mailly of Metz wrote of her. He tells how the 12-year-old Joan absconded from her family in Mainz after being seduced by a monk or a servant. In order to follow her lover she dressed as a man so that they could either enter into religious orders or a university to be educated together, depending on which version is believed. Her tale has become muddled in the telling, so there are various versions from which to choose. After a stint of learning in Athens, when her lover died, Joan made her way to Rome in search of employment. There she found herself a job as a reader of the scriptures in the church. Her astounding learning and piety impressed her colleagues so much that she was eventually elected pope. Unfortunately one of her fellow cardinals, or possibly a clerk, saw through her disguise, with the result that she was seduced, coerced or raped by him. Her downfall came when she gave birth to a child while on a religious procession in full public view. According to de Mailly: ‘One day, while mounting a horse, she gave birth to a child. Immediately, by Roman justice, she was bound by the feet to a horse’s tail and dragged and stoned by the people for half a league.’ Or she may have died of natural causes. Such were the mutations of the story.

Pope Joan allegedly reigned in the ninth century, although there is no mention of her in the Vatican lists of popes; nor are there any unaccountable gaps into which Joan might fit. Her life story was so popular that other writers picked it up and added to it, with the tale being used by Protestants to challenge the validity of the papacy. As late as 1675 a book appeared in English, acting as a warning, entitled A Present for a Papist: Or the Life and Death of Pope Joan, Plainly Proving Out of the Printed Copies, and Manuscripts of Popish Writers and Others, That a Woman called JOAN, Was Really POPE of ROME, and Was There Deliver’d of a Bastard Son in the Open Street as She Went in Solemn Procession. Joan was then also reclaimed as a defender of the faith in the Catholic Counter-Reformation by writers such as the 16th-century magistrate Florimond de Raemond. It has been argued that the question of her sexual identity would have been uncovered when she was made pope after the use of the sede stercoraria was introduced. This was a chair with a hole in the seat, which supposedly facilitated the inspection of the testicles of the elected pope in order to establish his manhood. It was said to have been introduced after Pope Joan in order to prevent the likelihood of a similar mistake being made again. In fact the story is probably a fable. It is improbable that Joan ever existed. She was more likely a figure invented by de Mailly. However the possibility of a woman holding such great a position of power within the Church so fired the imagination that various writers wrote about her over the centuries.

Similarly Joan of Arc cross-dressed to do battle as a soldier and this act would lead to her death. As a 13-year-old girl she informed the Church authorities that she had heard voices calling her to fight the English. At the time, she was living with her parents in Domrémy and had lived the life of a peasant girl. Initially the local priest considered her with suspicion but she followed the instructions of her voices. In May 1428 she travelled to Chinon to meet with Charles VII, who, after listening to her with some incredulity, agreed to support her. She was provided with soldier’s armour and given an army to lead.

The sheer tenacity of Joan’s belief was enough to stir up willingness among even the most dubious of soldiers. Now, backed by sovereignty, the Church authorities were reluctant to condemn her. In the face of adversity she roused men to fight when all seemed lost. With each success the belief grew that she was unbeatable, with soldiers heralding her as a saviour. Regardless of whether her religious experience was a case of schizophrenia, or a way to gain recognition, she nonetheless became a cause célèbre.

Joan was eventually betrayed and handed over to the English. Although her accusers would deem her a heretic, it was her cross-dressing that was targeted as proof of her evil. At her trial, during her cross-examination on Monday March 12th, 1431, the interrogators attempted to establish why Joan had dressed as a man and to portray her as perverse. They asked her if her captain had encouraged her. If not, was it her voices? Joan asserted: ‘All that I have done of good, I have done by the command of my Voices’, reasoning ‘even now if I were with those of my own side and in this man’s dress, it seems to me it would be a great good for France to do as I did before I was taken’.

Whatever Joan did, it was not to save her. ‘Against the modesty of the sex, and which are prohibited by the Divine Law,’ she was arraigned for ‘things abominable to God and man … dressing herself in the garments of a man, short, tight, dissolute, those underneath as well as above … she had attired herself in sumptuous and stately raiment, cloth-of-gold and furs; and not only did she wear short tunics, but she dressed herself in tabards, and garments open at both sides ... She was always seen with a cap on her head, her hair cut short and a-round in the style of a man.’

She had broken the laws of God in dressing as a man and had broken the hierarchical laws of nature, which allotted her an inferior place. She was burned in 1431 as a witch and a heretic.

Both Joans serve as an example of how women used the dress of man to further their agendas. Both paid a price.

Julie Peakman is the author of The Pleasure’s All Mine: A History of Perverse Sex (Reaktion, 2013).