A photograph of shipbuilders working on the liner Queen Mary taken in 1935 tells a wider story, by Roger Hudson. 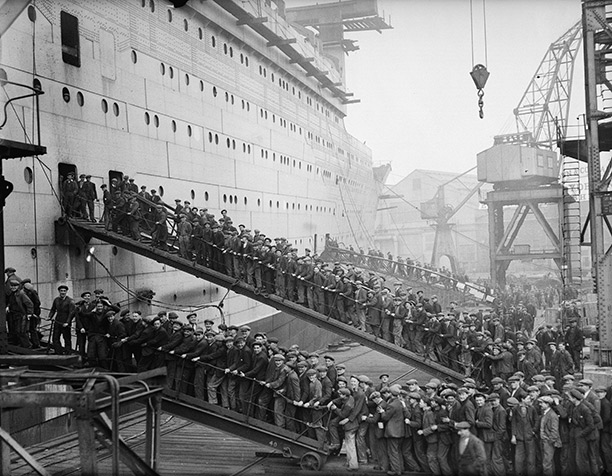 Hundreds of Clydeside shipbuilders at John Brown and Co.’s yard return to work on the Queen Mary after a dinner break in March 1935 – and not a head without a cloth cap. The beginnings of the great ship, the first British vessel to be over 1,000 feet long, were troubled. Construction on ‘Hull No 534’ began in December 1930 but work ceased a year later as the Great Depression took hold. It did not recommence on the giant rust-red hull until the middle of 1934. The government had stepped in with a loan large enough to finance the vessel’s completion and the building of a sister ship, too, the Queen Elizabeth. The owners, Cunard, with Victoria in mind, told George V they wished to name No 534 after the greatest of English queens, but he trumped them by retorting: ‘Oh, my wife will be pleased.’ So it was Queen Mary that was launched down the slipway in September 1934.