The rebirth of one of the world's great buildings took place on December 24th, 563. 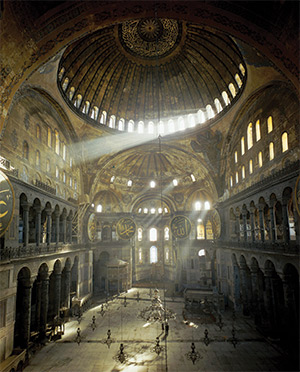 The Church of the Holy Wisdom, which was close to the palace of the Byzantine emperors in the heart of what is now Istanbul, is one of the world’s greatest religious buildings, a Christian cathedral for centuries, a Muslim mosque for centuries more and now a museum. According to one tradition the first church on the site was built on the orders of Constantine the Great, who died in the year 337, but if so it seems to have collapsed and been replaced by a grander building in 360, during the reign of the Emperor Constantius. That church was burned down during protests in the city in 404 and nothing remains of it. A replacement was soon built on the orders of the Emperor Theodosius II in 415, but it was destroyed in its turn in 532, when furious rioting broke out against the Emperor Justinian, the imperial palace was besieged and the church was burned to the ground.

Justinian quelled the riots, regained control and immediately ordered the architects Anthemius of Tralles and Isidore of Miletus to build a colossal and even grander church, on a different scale altogether from its predecessors. Stone was brought from quarries in Egypt, Syria, Libya and elsewhere, columns were fetched from the pagan temple of Artemis at Ephesus and the temple of the Sun in Rome and thousands of craftsmen and labourers were employed. According to one writer, the emperor split the workforce into two groups of 5,000 men on the north side and 5,000 on the south so that rivalry between them would make each group try to work faster than the other. So quickly did the work begin that it is thought that Justinian’s architects may already have had it planned well before the rioting broke out. The emperor loved pomp and ceremony and it seems that he wanted his great church finished before he died.

The new edifice took almost six years to build and it was consecrated at the end of December 537, when it was reported that Justinian was heard to mutter to himself: ‘Solomon, I have surpassed thee.’ The new Holy Wisdom was by far the biggest religious building in the entire Christian world, but it was badly damaged by a succession of earthquakes in the 550s and the dome collapsed. Justinian ordered a restoration by Isidore the Younger, nephew of Isidore of Miletus, who gave the building an even more amazing dome. The church was reconsecrated in Justinian’s presence on Christmas Eve in 563 and the emperor died two years later.

The Holy Wisdom was a symbol and incarnation in stone of the majesty of the Byzantine Empire. Its holy relics included the Virgin Mary’s milk, the baby Jesus’ swaddling clothes and the table of the Last Supper. It was the seat of the Patriarchs of Constantinople, the empire’s spiritual leaders, coronations were celebrated there and it was the focal point of imperial and religious processions. John Julius Norwich has suggested that the proudest moment in its long history occurred in the year 628. The True Cross, believed to be the one on which Christ was crucified, had been discovered long before in the Holy Land by the Empress Helena, mother of Constantine the Great. When the Persians invaded Palestine they took it away with them, but the Emperor Heraclius recovered it after a successful military campaign. He had it brought to Constantinople and, escorted by soldiers and the first elephants ever seen in the city, it was paraded to the Holy Wisdom. There, in a service of thanksgiving and profound veneration, it was slowly raised to stand upright in front of the high altar. Heraclius then had it restored to its true home in Jerusalem.

There were repairs, restorations and alterations as the centuries went by and from 1204 to 1261, when Crusaders from western Europe ruled Constantinople, the church was a Roman Catholic cathedral. Count Baldwin of Flanders was crowned emperor in Hagia Sophia in 1204.

An even more drastic change came in 1453 when the Ottoman Turks under Sultan Mehmet II took Constantinople by storm. Mehmet rode into the city in triumph at the head of his troops and went at once to Hagia Sophia, which he announced was now to be converted to Muslim worship as the Great Mosque of Aya Sofya. The Islamic mihrab, which indicated the direction of Mecca, replaced the altar and Mehmet and later sultans made other alterations, added minarets to the building and strengthened it against earthquakes. Until the Blue Mosque was opened nearby in 1616, it was the principal mosque in the city. In the 1930s the Turkish government turned it into a museum. Visiting it is a deeply inspiring experience.