Roger Hudson examines a photograph of July 1909, which captures the early 20th-century vogue for balloon racing. 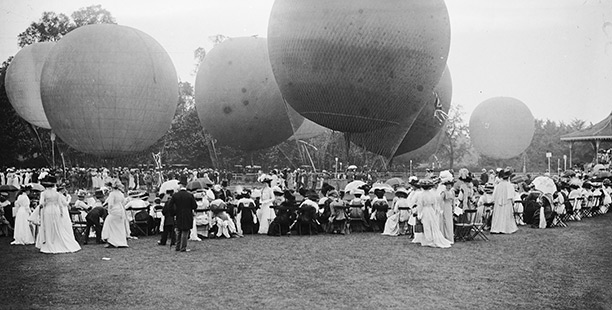 In the 1900s a new pastime was added to the diversions open to the wealthy: racing gas-filled balloons, starting from the smart Hurlingham Club in Fulham and aiming at a predetermined spot, normally somewhere to the east of London, given the prevailing westerly wind. Hurlingham had started life in the late 1860s, offering polo and pigeon shooting, with the birds released to order. But it was always eager to add to its sporting attractions. The balloons were not dirigibles and had no engines, although the Brazilian Alberto Santos-Dumont had demonstrated their potential in France at the turn of the century. The only way any control could be exercised was to empty ballast bags of sand over the side of the basket to gain height or release some gas to descend. There was a complicated handicapping system, involving the amount of ballast and the number of passengers. The Aero Club had several fixtures at Hurlingham in 1909, the most important being the international balloon race held in May, with three German entrants, one Belgian, and 11 British. The target was about 30 miles away, near Billericay in Essex, and competitors reached over 8,000 feet on the way there, averaging about 13 mph. One of them, forced down early, complained: ‘Stratford is not the best part of England. The people there are rather common and keep asking for money.’ Britain took the first four places.

That there might be something more serious behind all this was hinted at by the presence of 60 men from the army’s Balloon Section at Aldershot. But it was to turn out that the future lay with fixed-wing, powered flight and, indeed, the first successful British aeroplane had had its maiden flight in October 1908, built and flown by the Texan showman ‘Colonel’ Samuel F. Cody and called Army Aeroplane No 1 in recognition of the army’s involvement in it. The scene in this photograph is the start of a balloon race on July 17th, 1909. When on July 25th Louis Blériot became the first man to fly the Channel, the writing really was on the wall. It was not that the balloonists were blind to the potential of the aeroplane. The Hon C.S. Rolls – the Rolls of Rolls-Royce and one of the founders of the Aero Club, who took part in May’s international balloon race, making himself unpopular when he emptied sand ballast over the crowd as he took off – was to become the first to make a two-way crossing of the Channel in 1910, before he was killed in his Wright Flyer plane at an air show at Bournemouth, when he descended too steeply and his elevator broke off. This meant he had achieved another, melancholy first: becoming the first Briton to die in an air crash.

Hendon aerodrome was soon to supplant Hurlingham as the venue where the possibilities of flight were displayed and in May 1912 the Royal Flying Corps was created, with separate army and naval sections.