The celebrated little person was married on February 10th, 1863. 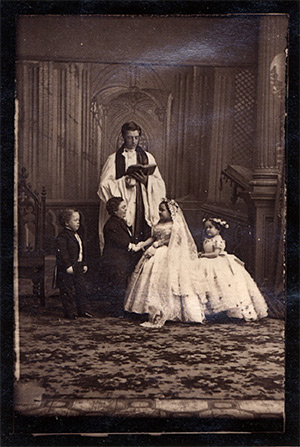 Charles Sherwood Stratton seemed a perfectly normal baby when he was born in Bridgeport, Connecticut in 1838, but from the age of six or seven months he stopped growing. He added a few inches later on, but he would never stand as much as three feet tall. He was four when he came to the attention of Phineas T. Barnum, who staged freak shows in New York City and later founded the Barnum and Bailey circus. Barnum made friends with the Stratton family and took Charles and his parents off to New York. With training Charley quickly proved to be a brilliant mimic, comedian and all-round entertainer. Barnum called him General Tom Thumb and gave out that he was 11 years old and had just arrived from England.

In 1844 Barnum took his protégé to London, where he was driven about in a carriage hauled by miniature horses and charmed Queen Victoria when she summoned him to Buckingham Palace. He went on to tour France, where his impersonation of Napoleon Bonaparte went down well. Witty and charming, he was old beyond his years, drank wine with his meals from the age of five and started smoking cigars when he was seven. He said later that he never had a childhood.

Successful tours of the United States and Europe continued and in 1862 Tom fell in love at first sight with a pretty dwarf called Lavinia Warren (she had started life as Mercy Lavinia Warren Bump) when she began working for Barnum. It was Barnum who paid for their wedding and he made it a spectacular event in Manhattan. The best man was another Barnum dwarf and the bridesmaid was Lavinia’s sister. Huge crowds watched the bride and groom arrive at Grace Episcopal Church, where they were married by the pastor of the Bridgeport church in which Charley Stratton had been christened. Congressmen, generals and the cream of New York society attended the ceremony and went on to the reception at the Metropolitan Hotel, where the newlyweds stood on top of a grand piano to greet more than 2,000 guests (some of whom are said to have paid Barnum for their invitations).

President Abraham Lincoln gave a reception for Tom and Lavinia at the White House. They toured Europe and later Asia and the Far East, performing together and hiring a baby in each country, which they pretended was their own. They later joined Barnum’s circus.