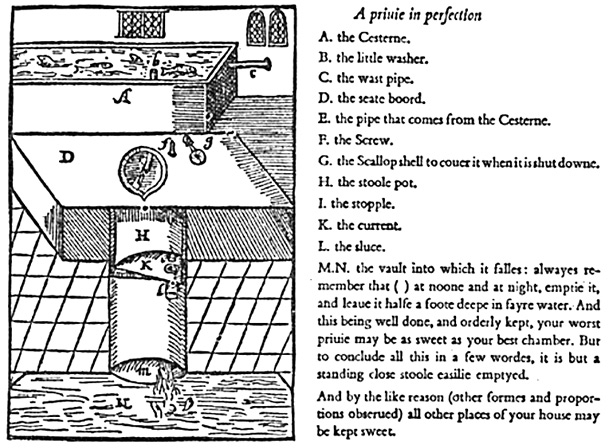 A witty and erudite figure at the court of Elizabeth I, John Harington is now remembered mainly for two things. One is his cynical epigram on treason: ‘Treason doth never prosper, what’s the reason? Why, if it prosper, none dare call it treason.’ The other is his invention of the flush water closet. He installed one at his country house at Kelston, near Bath in Somerset, and described it in a Rabelaisian manner in his A New Discourse of a Stale Subject, called the Metamorphosis of Ajax of 1596. Ajax was a pun on ‘jakes’, which was slang for a privy, where people could simply use a bucket. Wealthy households might have a close-stool, which had a padded seat with a metal or porcelain container beneath it that still had to be emptied.

Harington’s device emptied itself. It had a pan with a seat and water was pumped up into a cistern above. When a handle on the seat was turned, the water swept the pan’s contents into a cesspool underneath. There was a picture of it in his book and he proclaimed that it ‘would make unsavoury Places sweet, noisome Places wholesome and filthy Places cleanly’. He installed one for Elizabeth I at Richmond Palace. She does not seem to have been impressed, but then like other rich people she did not have to empty her own close-stool.

Harington’s family were old friends of Elizabeth and the queen was Harington’s godmother. She seems to have been fond of him, but he was often in trouble for circulating lewd verses and translations among the court ladies. He won his knighthood for military service in Ireland in the 1590s and later for a time acted as a tutor to James I’s son Henry, Prince of Wales. He was 51 when he died at Kelston. His flush toilet did not catch on and serious improvement of lavatories in England had to wait for the 18th century and the coming of the S-bend.