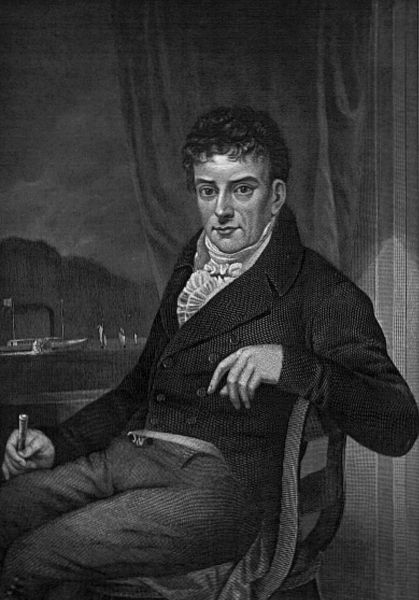 One of the most remarkable engineers of the nineteenth century originally wanted to be a painter. Born and bred in Pennsylvania, he went London as a young man and exhibited at the Royal Academy, but he was not making enough money to suit him and by 1796, in his early thirties, he had turned himself into a canal engineer. In 1797 he went to Paris, where he lived in a lively ménage à trois with the American businessman Joel Barlow and his wife Ruth, and built a submarine called the Nautilus, which saw action without success against British ships in the early 1800s.

He turned his attention to steamships with the backing of the oddly named Robert Robert Livingston, the wealthy American minister to France, who had acquired the exclusive right to operate steamships in New York State. A steamboat called the Experiment had made regular runs along the Delaware River from Philadelphia in 1790 and Fulton and Livingston had their eyes on the Hudson River in New York State.

After unsuccessful attempts to get the British government to pay him a massive fee for agreeing not to use his submarine against them, Fulton returned to the United States in 1806 and built the North River Steam Boat (later the Clermont, named after the grand Livingston family estate in the Hudson Valley). A side-wheeler ­paddleboat with auxiliary sails, it was 146 feet long and only 12 feet wide, flat-bottomed, drawing a mere two feet of water and driven by a coal-fired steam engine.

In August 1807 the boat made a trial run up the Hudson from New York to Albany, a distance of 150 miles. It took thirty-two hours for the journey, with forty guests on board, mainly friends and family. The boat’s own sails were not used and at a speed of five miles per hour it overtook many sailing ships with contemptuous ease on the way. From early September it began making regular runs between the two cities.

Writing to Joel Barlow, Fulton said that his new type of vessel ‘will give a cheap and quick conveyance to the merchants on the Mississippi, Missouri and other great rivers which are now laying open their treasures to the enterprise of our countrymen’ and reflected on ‘the immense advantages that my country will draw from the invention …’ He was right. River paddle-steamers opened up much of the country to settlement and commerce, and acquired an enticingly glamorous image.

By 1814 Livingston and Fulton were running steamboats on the Mississippi, the Ohio and other rivers as well as the Hudson. Rival operators had moved in and there was a protracted legal dispute over Livingston’s monopolies on the Hudson and the Mississippi. Eventually in 1824 the Supreme Court ruled that they were unconstitutional, but Livingston had died in 1813 and Fulton died of pneumonia in New York City in 1815, aged forty-nine.

He was regarded with great patriotic admiration in the United States and his early death was considered a national tragedy.