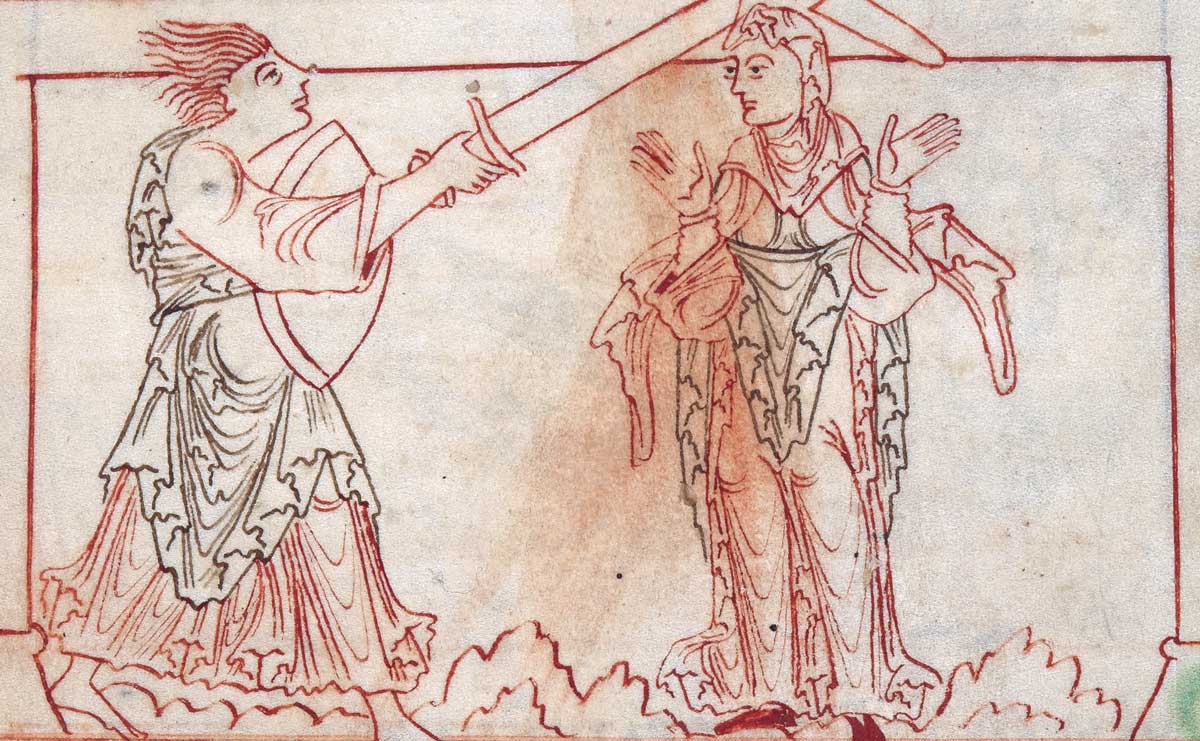 There has been a recent upsurge of interest in early medieval ‘warrior women’. Television programmes such as Vikings depict fearsome women fighting beside men among the Viking hordes and, in 2017, an article claiming that the warrior grave at Birka, Sweden, belonged to a biological female caused quite a stir. In Britain, a small number of ‘warrior graves’ have similarly been found to contain female skeletons. But does that mean that ‘shield-maidens’ existed in Britain? Even if a small number of women did fight, it was as non-combatants that they overwhelmingly encountered war. Importantly, one did not need to be a shield-maiden to experience the ravages of warfare in early medieval society.

This was especially true when warfare was conducted close to home. In early medieval Britain, pitched battles were not as common as the Anglo-Saxon Chronicle – a vast tract of annals listing battles and kingly deeds – makes it seem. Rather, warfare consisted largely of small-scale raids to pillage goods, livestock and slaves. Even if the aim was not to decimate the enemy population, such activities were not bloodless. For instance, the Chronicle for the year 626 records that, when King Edwin of Northumbria launched a campaign in Wessex, ‘a great number of the people’ were killed. The Northumbrian monk Bede neglected to mention such widespread devastation in his account of the same event. Instead, Bede expounded on the cruelty of the British king Cadwallon who rebelled against his Northumbrian overlords and joined forces with Penda, the pagan king of Mercia. Apparently, Cadwallon was so bestial and unchristian that he spared neither women nor children as he raged through Bede’s homeland. To Bede, this was an unthinkable level of brutality, even though his favoured rulers (Edwin included) undoubtedly committed similar atrocities in their own campaigns. The deaths of women and other non-combatants only warranted explicit mention when it was at enemy hands – otherwise, such casualties were an unfortunate but inevitable by-product of war.

Women with means and mobility could protect themselves and their dependants from these dangers. Following the death of her husband in 633 at the battle of Hatfield Chase, Queen Æthelburh of Northumbria gathered her children and fled to Kent, where her brother was king. Another Northumbrian queen, Eormenburgh, removed herself to the safety of a religious house in Carlisle, while her husband, King Ecgfrith, fought the Picts in 685. Although she was in no immediate danger from a marauding army, Eormenburgh’s fortunes rested on the outcome of her husband’s campaign and his death beyond the kingdom’s borders might have resulted in her being ousted. It is probable that women of lesser means likewise sought shelter at religious houses when warfare threatened their homes. Nuns were all too frequently targeted by warriors looking to undermine their enemy’s power and destroy kingdoms by assaulting its most vulnerable members. Indeed, sexual violence was not only a by-product of warfare but an active policy. Alcuin of York bemoaned the violation of nuns as an indicator of secular men’s disintegrating morality, and Bede explicitly denounced the actions of young warriors who took sexual liberties with consecrated virgins. The Vikings have a particularly enduring reputation as soldier-rapists who targeted nuns. So feared was this fate that the nuns of Coldingham in Northumbria purportedly cut off their lips and noses to dissuade the raiders from assaulting them – speaking to the desperation, terror and very real dangers that women faced in times of conflict.

If a woman experienced sexual violence because of warfare, it is likely that she also faced enslavement. The anonymous female mourner at the end of the epic poem Beowulf lamented her kingdom’s uncertain future, imagining ‘her nation invaded, enemies on the rampage, bodies in piles, slavery and abasement’. These were not simply poetic motifs. Early medieval Britain had a significant domestic and overseas slave trade and slaving was crucial to warfare’s profitability. Women were ‘prized items of plunder’, writes the historian John Gillingham, because their capture represented the literal and symbolic destruction of a region’s wellbeing. Women from all social backgrounds were in danger of becoming enslaved in times of war. A letter sent by Berhtwald, the Archbishop of Canterbury (709-71), to Forthhere, the Bishop of Sherborne, gives us an impression of this. The letter was written on behalf of a Kentish nobleman whose kinswoman, Eppa, was a slave in the possession of an abbot in Glastonbury. Reticent to release her, the abbot was now being offered a handsome sum for her return. It is possible that Eppa had been violently abducted, causing sufficient outrage to secure the archbishop’s involvement. Women of lesser social status, economic means and political connections would not have elicited such a response. It is certain that many women found themselves in Eppa’s position, but, lacking social clout, their fates passed in silence. Outrage at women’s victimisation was reserved for nuns and aristocrats.

Fundamentally, even if a woman was lucky enough to escape direct violence, her fortunes were nonetheless tied to warfare’s outcomes. Warfare propelled social mobility – for better or worse – and had wide-reaching social, political and economic implications. Women did not need to be shield-maidens of legend to experience this and for warfare to influence everyday life, determining the fortunes and futures of people well beyond the battlefield. The image of warrior women is profoundly appealing when faced with the reality of women as victims, targets and spoils of war.