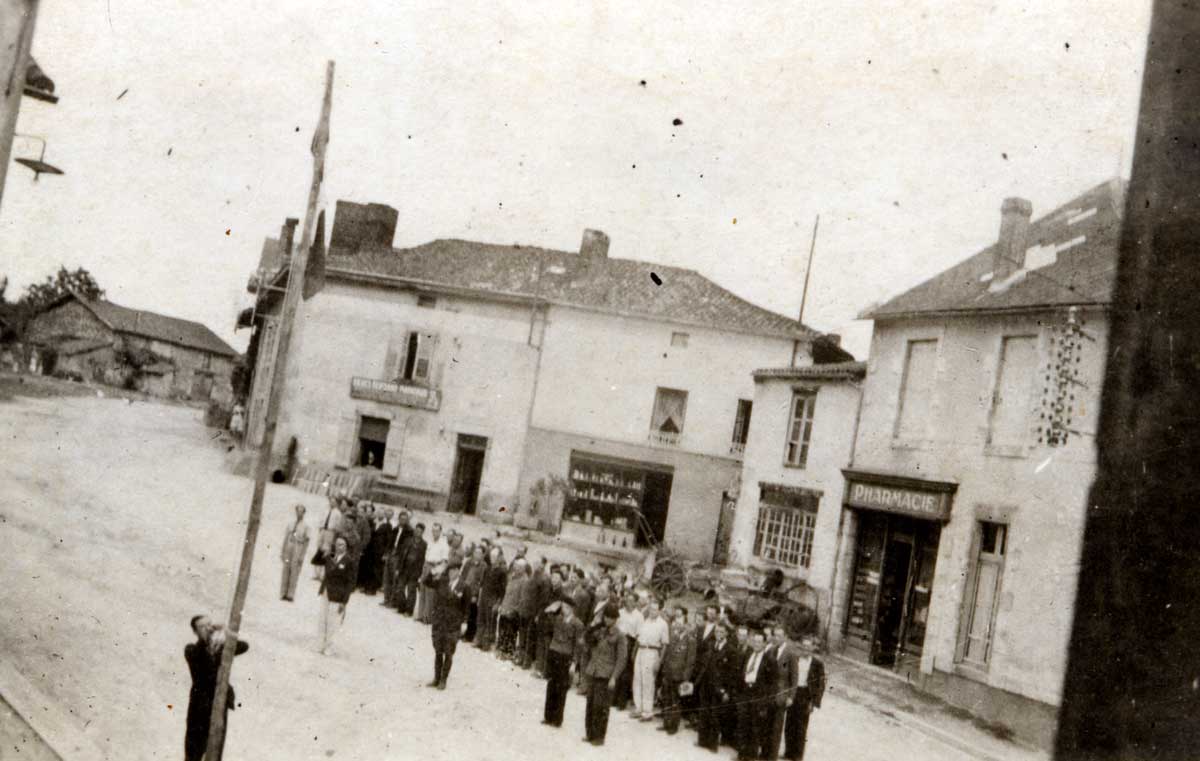 Set in a valley beside a meandering river in the rolling Limousin countryside, Oradour-sur-Glane was  known for centuries as a quiet spot, ideal for weekend visits to fish or swim. General Charles de Gaulle later painted it into France’s collective memory as a lost idyll, a wholly French bourg, which represented all that France had endured during its years of occupation. On Saturday 10 June 1944, just four days after the Allies landed in Normandy, 643 men, women and children were killed by the SS Panzer Division ‘Das Reich’ in a massacre that would become infamous. Within a year de Gaulle ordered the burnt-out shell of the village to be preserved as a memorial of France’s selfless sacrifice. Its people’s names, occupations and backgrounds were subsumed by a singular story of martyrdom and innocence.

Before its destruction Oradour had been untroubled by the occupying forces and the Vichy authorities. It had, however, witnessed many changes, beginning almost as soon as war was declared in September 1939. Its men were mobilised and evacuees and refugees arrived almost immediately and continued to come in waves from across France and beyond. These new arrivals included significant numbers from large Jewish communities in Strasbourg and Metz, who were then prohibited from returning.

Oradour became increasingly used to outsiders and from 1941 the 643rd GTE (Groupement de travailleurs étrangers) was briefly located there. These camps were devised to house and exploit Spanish refugees who had fled Franco’s new regime in the late 1930s. Their families followed, setting up homes nearby, and the Vichy regime added Jews and other ‘undesirables’ to the camps. Work was backbreaking and the pay meagre, but it was the only way for Spanish refugees to remain legally in France – even if it meant former lawyers and doctors having to cut peat, break stones or saw wood.

Jean Jackow had probably arrived in the region to work in the 643rd GTE. When Vichy officials demanded Jews from the camps to fulfil deportation quotas, some guards ensured that they had sufficient opportunity to disperse. A few were tracked down and others joined the Resistance. Jackow, a Pole, managed to evade detection and he found lodgings for his family in a nearby hamlet, where he worked as a farm labourer. On 10 June 1944 he headed to the village to collect his tobacco ration. While there he was sent to the square with the rest of the population and was shot. His family, still at home, were spared the fate of the village’s women and children, who were asphyxiated, shot and burned in the village church.

From the moment they were targeted by law in June 1940, life was particularly hard for foreign-born Jews such as Jackow. As well as being targets for deportation, they sometimes struggled with language and often integrated less. As a result, they received less ready protection from locals, though they thrived if they could pay. French-born Jews, better integrated culturally, religiously and linguistically, fared better. Robert Pinède, the owner of a leather tanning business in Bayonne, had managed to carry on until mid-1943. With the entire western coast in the occupied zone, even non-practising French Jews like the Pinède family were obliged to wear yellow stars. Like all Jewish-owned businesses, his was eventually placed under a Vichy administrator. He and his family travelled to the ‘free zone’, by then fully occupied by the Nazis, to St-Junien, a town known for leather and glove making. Accommodation proved impossible to find, but the nearby village of Oradour-sur-Glane was recommended to him. It was, he was told, well set up for refugees.

The Pinède family’s next-door-neighbour, Jean Roumy, had been président of the Oradour branch of the Pétainist veterans’ association until it had fizzled out in 1943. Yet the two households became firm friends. Pinède, who continued to work for Jewish aid associations, was well aware of the dangers his family faced; he arranged for his children to sleep in a property across the street just in case he was sought in the night. Just after lunch on 10 June 1944, as the SS rolled into the village, he hid his children under some concrete steps while he accompanied his wife and mother to the round-up.

Other French Jews had come to Oradour for similar reasons. Nathan Lévy, a dentist, had left Rennes when his right to practise was made illegal. Staying at the Hôtel Avril under an assumed name, he survived the massacre because he fled, fearing his papers were not in order. He watched the massacre unfold from a ditch near the river Glane. Jules and Jeanne Lang, an elderly couple from the Bordeaux suburbs, were saved by a local woman who hid them with her in her wine cellar. German-born Joseph Bergmann and his wife and son were not so fortunate, nor were the Kanzler family, who had kept to themselves since arriving with the first wave of evacuees, or 15-year-old Sarah Jakobowicz, who hid from the round-up but could not escape the flames.

Oradour-sur-Glane, very ordinary and not involved in Resistance activity, was on the route of ‘Das Reich’. Easily surrounded, with no maquis close enough to fight back, it was in the wrong place at the wrong time when the German High Command decided to strike in a bid to dampen enthusiasm for the Resistance. In June 1944 it was not de Gaulle’s idyllic haven, but a microcosm of what that part of the country had become. Some had only just given up hope in Pétain; most were united in their hatred of occupation.

The Pinède family jewellery happened to be in the safekeeping of the Roumy family, their so-called Pétainist neighbours. When the Pinède girls returned to the ruins of their parents’ home they found a collection of singed documents, stamped ‘Juif’ or ‘Juive’. It was all they had left from their parents, testaments of lives brutally cut short, but which went against the grain of Vichy’s antisemitic policies in a village that had welcomed them and made them their own.

Robert Pike is the author of Silent Village: Life and Death in Occupied France (The History Press, 2021).