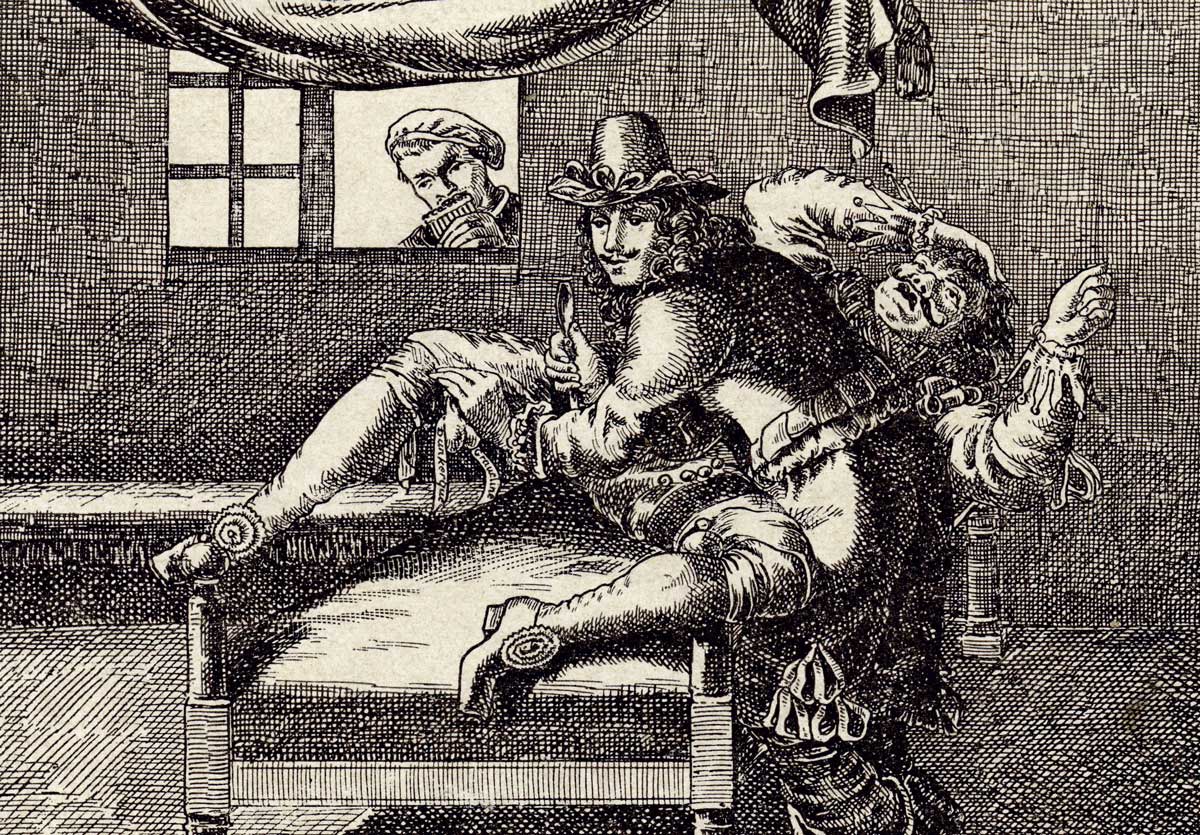 In 1676 the surgeon James Yonge was called to attend to an unusual injury. A young man was bleeding dangerously from the groin. This was no accident. Yonge discovered that his patient had ‘castrate[d] himself, by gripping up the Testicles, with the whole Scrotum in one hand, and with a keen Knife in the other cutting them off close to the body’.

The unfortunate patient had ‘bled very largely before any one discovered it’ and was in a perilous state. Yonge swiftly gripped the wound in his hand to stop the haemorrhage, while his assistant prepared dressings and gave the young man herbal medicines to relieve his pain. Thankfully, their actions worked and within a month the patient was almost back to normal.

To a modern reader this act might seem like an example of what we now call self-harm, indicating serious mental illness. As Yonge’s account reveals, however, in the 17th century self-castration was unlikely to be viewed as driven by madness. Instead, self-castration by cutting off one’s own testicles could be represented in medical texts as an act of agency or protest.

Yonge’s patient claimed that he had acted ‘on a religious account’. He may have been inspired by a verse in the New Testament that stated that ‘there be eunuchs, which have made themselves eunuchs for the kingdom of heaven’s sake’ (Matthew 19:12). It was also noted that, by injuring himself in this way, the young man ‘acted Origen Secundus’; that is, he emulated another eunuch, the Church Father Origen of Alexandria. Origen was reported to have gelded himself because ‘he was eager to fulfil the Saviour’s words and also to forestall all slander on the part of unbelievers’ – an act that Renaissance theologians renounced as over literal in its interpretation of the Bible’s words.

Despite the man’s claims to religious motivation, however, Yonge’s account records that most of the people involved with this case believed it more likely that the patient had suffered a ‘disappointment in love’, which provoked his extraordinary act. This belief was consistent with a surprisingly large number of other recorded instances of self-castration linked to romantic disappointment. In 1678, for example, the renowned surgeon John Browne reported that two men in Norwich had ‘endeavoured to castrate themselves’ because they believed that ‘if ever they should have any children, they could not maintain them’. Another text reported that a man had castrated himself as punishment after finding that during an intimate encounter with his mistress, he was ‘so unhappy as not to be master of the instruments of his passion, which would not ... obey him, but were all ice and snow, while his heart was on fire’. In one particularly memorable story, a peasant man castrated himself because he was frustrated by his wife’s jealousy. Coming home to ‘the usual welcome’ of her furious accusations, he

made no more ado, but immediately, with his scyth ...whipt off those parts which gave her so much umbrage, and without any more ceremony threw them in the good woman’s face.

Stories such as these show how self-castration made literal the feelings of emasculation which men suffered when they were unable to maintain control in their romantic relationships, whether from poverty, impotence, or because of a domineering partner.

Self-castration was particularly strongly associated with men’s fear of being cuckolded and of raising children who were not their own. One 18th-century surgeon told his readers of a gory case in which a man ‘on a suspicion of his wife’s incontinency, and thereby to discover the truth’ decided to geld himself in an upstairs chamber. He was discovered when the blood from the wound ran through the floor and was noticed by the residents of the room below, but luckily was ‘rescued from the most imminent danger’ by the surgeon’s timely arrival.

Stories like these were so notorious that they even inspired a comic ballad, titled The Quaker’s Wife’s Lamentation. In this popular song, a Quaker man castrates himself because he suspects his wife of infidelity, telling her

If thou had’st been true my Girl,
I ne’er had parted with Natures Pearl.

The song shows how a man’s self-castration could also be a punishment for his wife, who suffered shame from people knowing about her husband’s castrated status and her own potentially loose morals. When the Quaker tells his wife that ‘I am Lame, and thou must Hault [limp]’, she cries out:

Oh husband, husband, what have you done?
You’ve parted with Jewels were none of your’n,
But they were Jewels belonging to me,
For which I’d not take Gold nor Fee;
Them I delighted more to feel,
Than e’er I did my Spinning Wheel.

Though this ballad was meant for comic effect, it also reveals a surprising truth about the gender politics of 17th- and 18th-century Britain. Men were supposed to rule the household and women were meant to remain chaste, silent and obedient. In reality, however, women did not always act on this ideal and men found themselves struggling to live up to unattainable models of masculinity. Paternity was a particular source of anxiety. The period’s economic system relied on men passing on their wealth and titles to their children, but, in an era long before DNA testing or even accurate calculation of conception dates, men only had their wife’s word that the children they were rearing really were theirs.

Trapped between the demands of society and the pressures of messy real life relationships, self-injury offered men an attention-grabbing but dangerous way to express their feelings of discontent, anger and frustration. Acting the martyr, or merely ‘disappointed in love’, men who turned the knife on themselves reveal much about the time in which they did so.