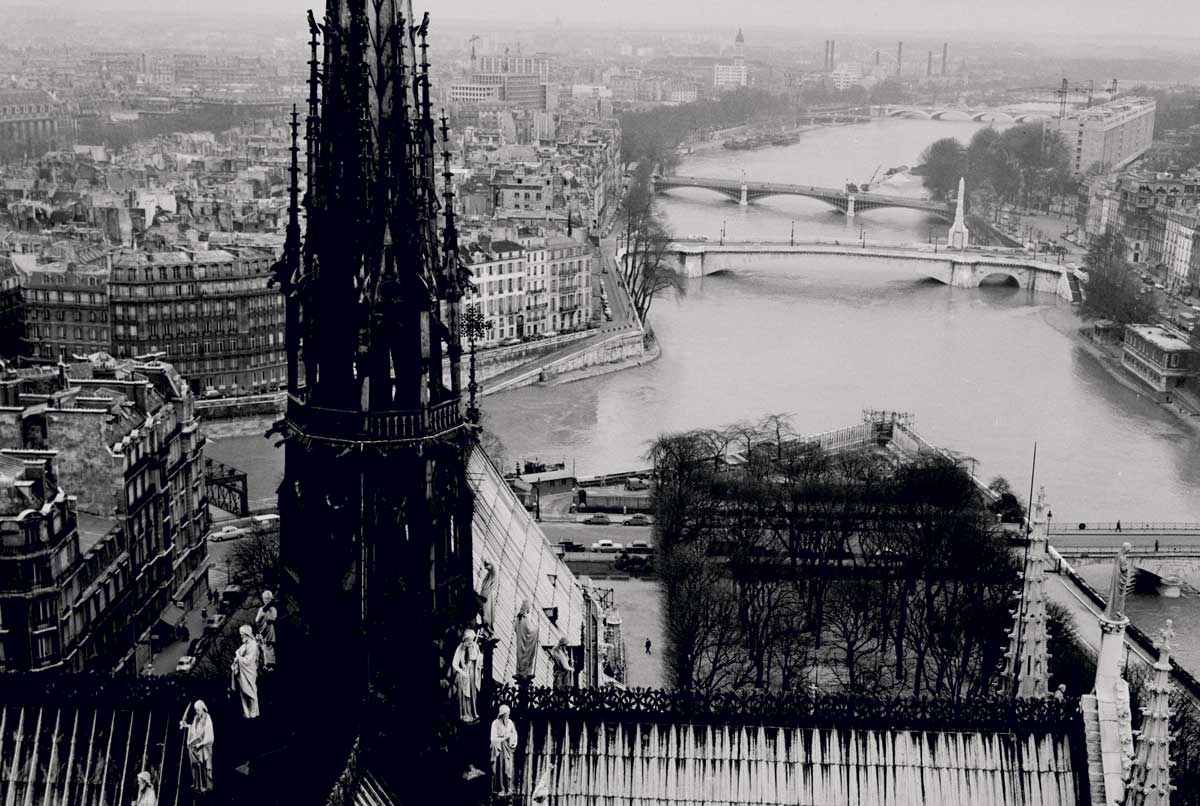 In the weeks and months that followed Notre-Dame’s fire on 15 April 2019, people have tried to grapple with the loss. Not just of the physical building, of course, but also the loss of the history. Notre-Dame was – and is – a physical timeline of the city and the fire burned through a material history that cannot be replaced.

The fire’s immediate aftermath saw a political and financial commitment to rebuild Notre-Dame. Even before the fire was completely extinguished, France’s president, Emmanuel Macron, expressed the intention of rebuilding the cathedral. ‘Notre-Dame is our history, our literature, part of our psyche, the place of all our great events, our epidemics, our wars, our liberations, the epicentre of our lives’, Macron said in front of the still-burning cathedral. ‘Let’s be proud, because we built this cathedral more than 800 years ago, we’ve built it and, throughout the centuries, let it grow and improved it. So I solemnly say tonight: we will rebuild it together.’

But this prompts the question: what would it mean to rebuild something like Notre-Dame?

The answer depends on what we mean by ‘rebuild’, as well as what we mean by ‘Notre-Dame’. To begin with, ‘Notre-Dame’ is not a static entity or a dead monument: it had been built, modified, rebuilt, renovated and reworked in the eight centuries since work began in 1163. Flying buttresses were a late addition to the design, for example. The cathedral was damaged during the French Revolution and fell into neglect and disrepair by the 1790s. Half a century later, between 1844 and 1864, at the behest of the French government, Eugène Viollet-le-Duc undertook major restorations thanks to popular interest generated by Victor Hugo’s The Hunchback of Notre-Dame. Consequently, the spire that collapsed in April’s fire was not the original medieval one built in the 13th century but the product of the 19th-century work. What episode, then, ought ‘rebuilding’ to invoke?

Moreover, rebuilding Notre-Dame is not just a question of logistics but one of ethics. Specifically, it is about weighing historical significance and cultural character with aesthetics and, in the wake of this fire in particular, with safety. If historically valuable things ought to be preserved, this logic goes, then preservation ought to strike a balance between these different demands. Ultimately, how we treat historic things is a value judgement and these values shift and change over time. The recent fire is simply the latest in a long biography of architectural additions, subtractions and changes. When we talk about rebuilding something like ‘Notre-Dame’, we are speaking of an ethos as much as we are a piece of architecture.

The tension between how to preserve, rebuild, or experience an original piece of cultural heritage is hardly specific to Notre-Dame. France’s Caverne du Pont-d’Arc, for example, is a very realistic replica of the Palaeolithic cave, Chauvet. Because the body heat and carbon dioxide produced by people irreversibly damages Palaeolithic cave art, visitors have never been allowed into Chauvet as a stringent conservation measure. As a replica, Caverne manages to feel, look and even smell like its original. For its visitors, it stands for the real thing.

But it is impossible to build an exact copy of Chauvet – the contemporary cultural demands of replica mean that, while Caverne might be close to the ‘real’ cave, there are notable differences. The paintings in Caverne are, obviously, in keeping with those of Chauvet, but the shape of the replica is different from that of the original cave. Caverne was built for visitors to move through it in a way that the original cave never allowed. The need to preserve the Palaeolithic cave means that the most ethical or culturally appropriate way to see it is through the copy and to move visitors logistically through that copy means its shape has to change. If authenticity is relative, then these differences do not make Caverne any less authentic than the original cave – Caverne is an authentic replica that meets the demands (aesthetic, logistical, pragmatic) of the 21st century.

In the wake of the fire, Macron issued a call for proposals that would have reimagined the spire as something more contemporary. (One suggested the area become a cross-shaped swimming pool; another turned the under-roof into a bird and insect sanctuary. Several suggested different building materials, from recycled ocean plastic to gold leaf-encrusted carbon fibre.) These proposals offered an opportunity for the cathedral’s architecture to be reimagined instead of simply rebuilt. Was it more important, for example, to use recycled ocean plastic than it was to invoke the 19th-century, medievalesque ethos of the incinerated spire? And there was the question of how to balance aesthetic demands against contemporary building codes.

On 27 May 2019, the French Senate voted that the spire and other restorations of the cathedral should make the replacement look as identical to the 19th-century replacement of the medieval original spire as possible, that conservation ‘restores the monument in the same way visually as before’. It continued: ‘If the [conservation team] uses materials different from those in place prior to the disaster, it [should] publish a study giving the reasons for these changes.’

‘The motivation for this requirement is a desire to preserve a link to the past, where the assumption seems to be that if we don’t have the original material, we should at least capture the original look. But if a link to the past is what we value, why assume this is best facilitated through visual replication?’ the philosopher Erich Hatala Matthes asks. ‘Ironically, this is clearly not what Viollet-le-Duc thought when he reconstructed the tower in the 19th century.’ The tension between Notre-Dame being valued as a site of great history and visitors seeing only the last stage of Notre-Dame’s architectural history is palpable.

For now, it would seem that rebuilding Notre-Dame means to copy, mimic and replace the visual aesthetics of ‘exactly how it was’. That is, exactly how it looked at 6pm on 15 April 2019, just before the fire broke out; to rewind the building to that day, rather than any other moment in its history.

Lydia Pyne is the author of Genuine Fakes: How Phony Things Teach Us About Real Stuff (Bloomsbury Sigma, 2019).